Glastonbury cancelled because of coronavirus outbreak 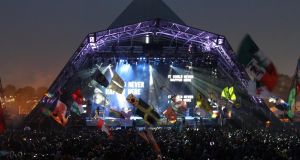 The Glastonbury festival, which was due to celebrate its 50th anniversary year in 2020 with headliners including Taylor Swift, Paul McCartney and Kendrick Lamar, has been cancelled as a result of the coronavirus pandemic.

The festival confirmed via Twitter on Wednesday that the event, which was set to take place from June 24th to 28th, welcoming more than 200,000 attendees to its home on Worthy Farm, in Somerset, was off “following the new government measures announced this week – and in times of such unprecedented uncertainty – this is now our only viable option”.

A statement from Michael and Emily Eavis, the father and daughter who run the festival, said that although they hoped the situation in the UK would have improved by the end of June, it was not viable to spend the next three months with thousands of crew on the farm, and 2020 would therefore be “an enforced fallow year”.

“We were so looking forward to welcoming you all for our 50th anniversary with a lineup full of fantastic artists and performers that we were incredibly proud to have booked. Again, we’re so sorry that this decision has been made. It was not through choice,” they said.

Ticket holders will have the chance to roll their £50 deposit over to next year, and guarantee the opportunity to buy a ticket for Glastonbury 2021, while those who want a refund can apply for one. Further information on coach packages, official accommodation bookings and other tickets will be added to the festival’s website in the next few days.

The festival had taken a business-as-usual approach until only a few days ago, announcing its third and final headliner – the Los Angeles rapper Kendrick Lamar was unveiled as the Friday night bill-topper – last week.

Last Thursday the festival announced an additional 90 acts – including Pet Shop Boys, Dua Lipa and Noel Gallagher – but less than a week later the impact of the Covid-19 virus was deemed so severe that the festival was no longer tenable.

The cancellation will be a huge blow to the festival, with some estimating losses could be as high as £100 million (€110 million), and will ruin its 50th-anniversary year.

When announcing the lineup additions last week, Emily Eavis said they came “after much consideration given the current circumstances, and with the best of intentions”, but that they didn’t have a crystal ball and at that point were working hard to deliver the event while closely monitoring developments.

The announcements came shortly after the UK government’s chief scientific adviser, Sir Patrick Vallance, said that late June was likely to be just after the peak of the outbreak.

The festival has become one of the most celebrated cultural events in Europe since its humble beginnings as a gathering of 1,500 people in September 1970. – Guardian