Miami Showband massacre: ‘I heard my platform shoes click against each other. I still had both legs’

Stephen Travers, who survived that night 45 years ago today, now works for reconciliation 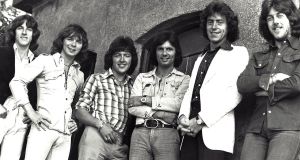 It wasn’t until my 50th year, when I read a scholarly essay about Northern Ireland, that I realised I was “a child of the Troubles”. It was, however, always from a safe distance that I learned to recognise the dull thunderclap of a bomb, our kitchen window trembling in its wake. And, in this place that shaped me, I learned that “remember” is, as the poet John Hewitt, puts it, “that loaded word”.

My friend Stephen Travers knows all too well about remembering. He was a member of the Miami Showband who survived that atrocity.

They were travelling home from a gig at the Castle Ballroom in Banbridge, Co Down, when they were flagged down at what appeared to be a routine British army checkpoint outside Newry. They were ordered to stand by the road with their hands on their heads, while the men in uniform checked their van.

Stephen recalls being concerned about what was taking so long. “My guitar was in there. I had a very unusual guitar, a transparent Dan Armstrong Plexiglas bass, and I was very protective of it. I was damned if I was going to let some awkward soldier manhandle it. I loved my guitar.”

Two of the uniformed men – later revealed as members of the Ulster Defence Regiment – were planting a bomb under the driver’s seat when it exploded, killing both of them. The other assailants opened fire, killing the band’s frontman, Fran O’Toole, its trumpet player, Brian McCoy, and its lead guitarist, Tony Geraghty.

Stephen had also been shot. Face down in the grass and motionless, he played dead, his only thoughts of survival. After some time had passed, Des McAlea, who also survived the attack, called out to Fran, Brian and Tony. He heard Stephen moaning and called out to him, saying he was going to try to get help. A lorry driver had stopped, and Des pleaded with him to take him to Newry police station, but he refused. Then a young couple in a car pulled up and agreed to take Des to Newry. Stephen says that Des saved his life.*

“I had managed to roll on to my back. I slowly brought my hands across my chest and carefully counted my fingers,” he says. “It was suddenly very important to me, as a musician, that I had all my fingers. They were all there. I thanked God as I heard my platform shoes click against each other; I still had both legs.”

Stephen remained there for almost an hour before help arrived. He tells me he is “still in that field”.

“When I discovered music I discovered Tír na nÓg, and I lived there for a while, but now I just get to visit it occasionally. Some day I might get to move back there permanently. Who knows... but I’ll have to get out of the field first,” he says.

Stephen had always wanted to be a musician. A gig by the then up-and-coming Thin Lizzy at the Forrester’s Hall in his hometown of Carrick-on-Suir, where he got to talk to Phil Lynott about what it was like to be a musician, made up his mind. The conversation “just burned a greater desire in me to make music my life. As a bass player I felt a connection with this man as a musician, and this day will live in my memory forever”.

He later moved to London, picking up gigs, but returned to Ireland, to a very different music scene from the one he remembered. “It was an exciting time to be a musician in Ireland. Every weekend thousands danced their cares away in the ballrooms of romance.”

His early days with the Miami were a roller coaster, playing to “pure adulation” of fans in every major city in Ireland, Britain and the United States. When he walked on stage for his first gig he was stunned by the roar of the crowd. “I tried to remain inconspicuous, but Fran was a showman, and he grabbed me around the waist with one arm and pushed me up to the front.” This was his introduction to the lifestyle of a celebrity. He loved every minute of it.

It took almost 40 years for Stephen to admit to anyone – himself in particular – that he was a victim. He was asked to give a talk during a “dialogue residential” in Warrington, in northern England, about the experience that changed his life and to bring a personal object associated with it. With a confidence he describes as arrogance, he felt that sharing his traumatic experience might help other victims; he agreed, but on condition that he was doing so as a survivor.

“I brought a used guitar string, in its original greaseproof pouch, that my friend and bandmate Tony Geraghty left at my home just a few days before he was murdered all those years ago,” he says. “It was small and fitted easily into the inside pocket of my jacket.”

The barriers he had painstakingly erected to protect himself came down. “I couldn’t speak, I was instantly paralysed and terrified, and tears came that had remained dry since 1975. I was no longer in Warrington; I was at Buskhill, in a field between Banbridge and Newry, and the slaughter of my friends was in full flow. Horror that I had suppressed for many years was playing out before my very eyes and deafening me to the edge of insanity.”

Realising he was still in “the field” set him on a journey around the world to support victims to share their testimony. In 2016, with Eugene Reavey, he cofounded the Truth and Reconciliation Platform, or Tarp, a charity aimed at giving Troubles victims from all backgrounds an “opportunity to tell his or her own personal story”.

When I found out last year that Stephen would be visiting the US to receive an award for his work, I wondered if we could figure out a way for him to fly to Chicago by way of Phoenix, so that he could tell his life story – and play some music.

With the support and help of a local Irish-American volunteer, Mary Moriarty, my friends in Phoenix and some local sponsors, we found a way – and a guitar like the one he used to play in the 1970s via a heavy-metal band, which amused Stephen.

At Arizona Jewish Historical Society, Stephen shared every harrowing detail of the carnage on that summer night in 1975 with the people who had gathered to hear him and who wept as he recounted the appalling consequences of politically motivated violence. We all felt something akin to refuge that night, as Stephen took us back to the field.

Talking to the audience at the Jewish centre, and then walking off that stage and starting to play, “was like having a shower, getting rid of all that stuff that you’ve waded through for the last hour or two. That’s what music is, isn’t it?”

Does he feel he will ever get out of that field? Yes, he says without hesitation. And what will help him achieve this? “Acknowledgment of wrongdoing by the people who did it, an expression from the British authorities – a commitment that this is no longer their policy.”

To mark the 45th anniversary of the massacre, Stephen has a simple request for artists, poets, musicians and performers all over the globe: “Wherever you are in the world, sing a song, play a tune, clap your hands or just say a verse of your favourite poem to remember them and post it on social media with the hashtag #MiamiShowband.”

You can support the work of Truth and Reconciliation Platform, by contributing to the Miami Showband Peace Centre appeal

Yvonne Watterson is an educator and writer living in the Lake Chapala area of Mexico. She was recently appointed a Miami Showband Peace Centre ambassador to Mexico

* This article was amended on October 20th 2020. The original version misrepresented the situation of survivor Des McAlea, who went to seek assistance for the wounded.