Thomas Bartlett: ‘It was self-soothing in the desolation of Covid’

Gloaming pianist’s solo album, called Shelter, was composed during the early days of the pandemic but ‘pre-George Floyd’, he says 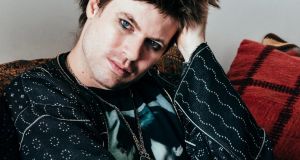 So, what seems like a lifetime ago, the world shut down and everyone advised to shelter in place. The furthest anyone’s compass could point was to their workplace, and then only if they couldn’t work from home.

The Gloaming’s pianist, composer and producer, Thomas Bartlett, was as discombobulated as everyone else by the Covid-19 pandemic and the way in which it wreaked havoc on his daily life. But even as  his home city of New York pulled down the shutters on March 20th, his respsonse was to gravitate to his piano, composing eight “nocturne-like” pieces over two days. These now provide him with his solo debut, Shelter, under his own name.

Where previously Bartlett released four albums of his own material as Doveman (with a series of collaborators), achieved vast acclaim with The Gloaming (that’s another four albums), and released two duo albums with Nico Muhly and Caoimhín Ó Raghallaigh, Shelter is a departure for him.

“It was right at the beginning of the lockdown in New York,” he explains, revealing a little of his own surprise at his creative response to the pandemic. “That was March 20th, and that morning, my girlfriend Ella flew back to the UK. So I have my studio in midtown. I guess technically I wasn’t supposed to go there, but I just walked the five miles from my place in Harlem to the studio every day, and that’s what I’ve done every day since lockdown began: walking back and forth between home and the studio.”

All of Bartlett’s sessions had been cancelled. He had been due to work with English singer Anohni that day but she had already left the city. New York, like everywhere else, was a ghost town. Bartlett realised that he didn’t have anything to work on. But he had his piano.

“I just found myself aimless at the studio,” he recalls. “So I put on a TV show and improvised on the piano while I watched the show, so it’s about having at least part of my attention taken away while making music. It just frees things up for me in a way. That’s often how I’ll even come up with Gloaming material: sitting at the piano and doodling until I find something that sounds promising.”

There was an intensity to his working methods, not something normally associated with having the TV on in the background. Bartlett composed four pieces for each of the two days. His own mood and that of the city around him are infused in each one.

“They felt very much to me like a kind of self-soothing exercise,” he muses. “I was feeling sad about Ella [Hunt, an English actor] having left, feeling scared for my parents, feeling cut off from collaboration in the studio, which is my lifeline.

“I’m constantly getting to collaborate with people who bring all these ideas and energy on their own, and it’s my job to tune into their wavelength and help shape it, so I don’t often have to provide my own fuel. I can work off of the energy of someone else. So I honestly think that at that time, I felt displaced and anxious and not really sure what to do.”

Shelter is a meditative collection, defined as much by space and silence as it is by the somnolent melody lines Bartlett found lurking within. It’s reminiscent of Keith Jarrett’s 1999 album, The Melody at Night with You, which was recorded when Jarrett was suffering from chronic fatigue syndrome. (He was in his own way sheltering in place, cut off from the world of music.)

It seems there is something timely about an album that welcomes silence at a time when sound and noise seems to have  disappeared from our worlds, at least for a brief period.

“That is absolutely true,” Bartlett says. “I’m almost a fetishist of silence. There’s something for me about the kind of intensity you get from pulling someone into the quietest thing, and then silence, and then the quietest thing and coming out of it. It invests the sounds with so much intensity.”

Shelter is a remarkable work of focus, but Bartlett isn’t so sure. Nor is he even sure how best to describe the eight pensive pieces he has composed.

“The nocturne term: I’m not even sure I would necessarily apply that to them,” he offers, with a quiet modesty that describes his demeanour throughout the interview. “I knew I was in a particular emotional and harmonic territory that is very comforting for me. It feels very easy for me to access. And maybe because it’s so easy to access, I’m a little bit suspicious of it sometimes. I can fall into that spot so easily that it can’t be that meaningful, right?”

Each piece is named after a rose, but these are not your typical garden roses. Bartlett relished the challenge of naming them, and came up with an intriguing mix of names that includes Phoenicia, Rubrifolia, Moschato, Rugosa and Xanthina.

“My naming habits are slightly odd,” he admits, laughing. “I had no desire to come up with titles that were reflective of what the actual piece was. That wasn’t in the spirit of it. So when I made the first of these piano pieces, I chose roses. And then I chose species roses because I’m much fonder of them than for example, the English roses with their thousands of petals. I had a real rose obsession as a kid, and so a few of them, like Rosa Rubrifolia, was one that I grew and really loved. But most of the rest are taken from a list of Wikipedia roses that I liked the sound of!”

This intense period of creativity didn’t last. Contrary to any romantic notions that this collection might conjure, of Bartlett working night and day in his studio during lockdown, he’s candid about the challenges of sustaining creative output amid so much chaos in the world.

“My experience generally is that it’s nearly impossible to build any sense of momentum,” he admits. “The work usually propels me forward and I get more energy from that. But I’ve been finding that the wind gets knocked out of my sails so easily. Where normally I can sustain a momentum, it’s been very difficult for me to do that.”

Sure, he’s been collaborating remotely with Adrian Crowley, with St Vincent and others. But he says that, in truth, “it never turned into the perpetual motion that usually keeps feeding me”.

The pandemic has wreaked havoc on artists’ lives. While Bartlett counts himself lucky to have his own studio, he knows that many artists – aside from the financial devastation – are also feeling that it’s futile to make work when the prospect of a live performance in front of an audience is so remote.

The one thing he is clear about is that Shelter is a snapshot in time, and one that he could not have made in more recent months, following the killing of George Floyd and all that ensued.

“I’ve been working with Al Sharpton’s eulogy at George Floyd’s funeral,” he reveals, “as I just thought it was such a remarkable piece of oration. I could not right now make another album of soothing piano music. That was pre-George Floyd. It was self-soothing in the desolation of Covid but right now I don’t feel that soothing pretty things are the right things to be making.”

Bartlett’s choice of a photograph of a family friend for the Shelter album cover is apposite. There’s an intimacy and informality to it that chimes with the music, he feels.

“That’s Don Sunseri, an old family friend, who was a huge figure in my childhood,” Bartlett explains. “He’s one of my favourite visual artists. Whenever he saw a piece of art that he didn’t like, one in which he felt there wasn’t enough dirt in it, he would say ‘not enough caca’. That was his way of dismissing anything that was just a little too pretty or a little too easy.

“And in a way, that was my anxiety about this record: not enough caca in it! I was using Don as a charm on the cover. The combination of cosiness and bad assness in that photograph just got me.”

Shelter is now out on Modern Recordings/BMG

TV Guide: 24 of the best shows to watch this week
6