Andrea Corr: ‘Fame made me more self-conscious and shy’ 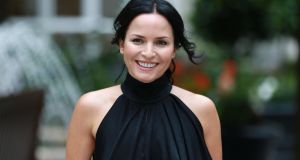 In 2000, the Corrs were unstoppable. The Irish siblings welcomed the millennium performing at the UK’s flagship Dome itself and finally converted their European success stateside. Despite the ubiquity, says lead singer Andrea Corr, few really saw the band for what they were: accomplished musicians, not three sisterly pinups (plus Jim). “That’s why we made sure we played our instruments,” she says. “You’re better off looking like a grungy band to be taken seriously, and we didn’t look like that.”

Twenty years on from the release of their third album, the mainstream breakthrough In Blue, the objectification and dorky ridicule has dissipated as a diverse array of young musicians reclaim a band they loved as kids.

Taylor Swift put their song Breathless atop her Women’s History Month playlist, calling the Corrs “female professors”; the Danish black-metaller Myrkur said they introduced her to the classic Irish folk songs behind her new album, Folkesange; and Ed Sheeran said they inspired Galway Girl, the musical equivalent of selling coals to Newcastle.

Most strikingly, the former Chairlift member Caroline Polachek has been doing an extraordinary live cover of Breathless that essayist Jia Tolentino described as “Enya-industrial”.

Andrea Corr can’t remember much of their peak. They were kept relentlessly busy: Breathless became the Corrs’ first UK No 1 single, later receiving the ultimate cultural kudos when it was sung by Tony’s daughter Meadow in The Sopranos. Corr wrote it with the producer Mutt Lange, then-husband of Shania Twain and a man who knows radio so well that “he cuts a song so it ends at the perfect time for the DJ to speak”, she laughs. Her iconic vocal leap – mimicked perfectly in Polachek’s cover – came about because Lange had heard that Andrea could yodel. “There was a suggestion of yodelling, but not full yodelling!”

The Corrs’ success mirrored the “Celtic Tiger” wave as Ireland capitalised on its modernisation. “The music was an analogue of a shiny, wealthy Ireland surfing on the capitalist boom,” says Noel McLaughlin, popular music historian at Northumbria University. “Boyzone was the game changer: [the idea] that Irish pop could become a key part of a national rebranding.”

While they wanted international success, Andrea was distressed by fame: “It made me more self-conscious and shy.” The momentum didn’t last into 2004’s Borrowed Heaven (which probably wasn’t helped by Jim spouting 9/11 conspiracy theories). “You always want it to last,” says Andrea. “But I don’t think we could have taken the intensity.”

Does it feel like 20 years ago? “It does and it doesn’t,” she says. “Sometimes I feel like I’m watching somebody that isn’t me any more, which it isn’t, I suppose. We lived and breathed that life. Now I live and breathe another life.” – Guardian

In a week of tributes to John Hume, a 12-year-old has the biggest impact
6

My dad the spy: Stewart Copeland on his father’s secret life as a CIA agent
8 A NUA WOMAN
9

Is it not time we celebrate Ireland and Britain’s closely intertwined culture?
10