Maria Doyle Kennedy: Joni Mitchell taught me not to feel sorry for myself

This Album Changed My Life: Joni Mitchell’s Court and Spark (1974) 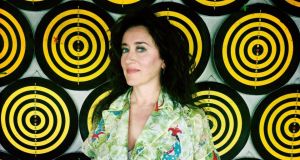 Maria Doyle Kennedy: Joni Mitchell planted the first seed for me that artists made whatever art they were feeling

Many albums have changed my life but this one was the start of it all. When I was 13, we got our first stereo (a Bush 3-in-1) for Christmas and we kids were also allowed to buy albums to play on it. My sister and brother both chose double albums, so to calm my protests of “How unfair” that might be, I was allowed to get two: Bob Dylan’s Street Legal and Joni Mitchell’s Court and Spark. The Dylan album was stolen from a party in Niamh O’Reilly’s house on St Stephen’s Night but Court and Spark is still with me 40 years later.

Not that I really need the physical copy, as every word, note, breath and pause is burned into my brain. There were days when it was literally all that mattered and when it had all the answers.

The glorious stories of lovers and travellers that tumbled out of her, the beautiful melodies that run to places you never expect and grow from whisper to a full-on storm, cast a spell on me. The words, the magnificent words that explained – so much more ably than I could – exactly how I felt.

“You want me to be truthful/ Sometimes you turn it on me like a weapon though And I need your approval.”

The idea that life was complicated, that going mad was a distinct possibility, that hopeless end-of-the-night bars were never a reason to feel sorry for yourself because there was always a sadder story.

“Everything comes and goes, marked by lovers and styles of clothes/ Things that you held high and told yourself were true/ Lost or changing as the days come down to you.”

Her delicate watercolours on the album cover planted the first seed for me that artists made whatever art they were feeling. Above it all, her beautiful voice soars as if singing was the most instinctive communication possible. Maybe sometimes it is.