Listen: Massive Attack release new music, with an album due later this year

The Bristol trip hop kings have played to their musical strengths and released a stunning EP in Ritual Spirit, with fans at the Olympia Theatre last week given a live preview 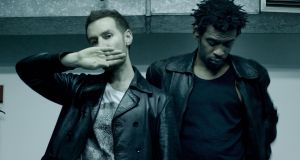 When it comes to British bands who are comfortable on the cutting edge, few can claim the calibre of Massive Attack. Since 1988, the band have released just five albums: they keep a rigorous control over their process and their music is all the better for it.

100th Window, perhaps their weakest album and without the work of regular member Grant Marshall/Daddy G, is still a very fine record. Their last album, 2010’s Heligoland, is a coiled, uneasy beauty. And now we have new EP Ritual Spirit.

It came, in typically inventive, technologically preoccupied terms, via an app called Fantom. This “sensory music player” claims to remix the tracks based on the listener’s heartbeat, location, and movement. Last week, listeners could hear fragments of the new songs by moving, using the phone’s camera or playing them at different times of the day. It’s not revolutionary, but it’s certainly intriguing.

And then, on Thursday, the EP dropped proper – more than a week after the band had given some of the tracks a live airing at Dublin’s Olympia Theatre, with help from collaborators new and old, including the beguiling Martina Topley-Bird and the durable Horace Andy.(You can hear it on Spotify here.)

British singer Azekel made the trip to sing the new EP’s title track; it could have come straight out of Massive Attack’s back catalogue. An ominous guitar riff offset by Middle Eastern percussion and Azekel’s keening vocal, this one will put most fans in mind of Teardrop, though it finds its own clear identity with a gorgeously intricate drop.

Also guesting are Young Fathers. After delivering an aggressive support slot, the band’s three vocalists came back to close the main set on new track Voodoo in My Blood. The verse vocal might have Rihanna banging on their door while mouthing the words “Bitch better have my money” (assumign she's not busy tearing Tidal a new one one after the botched release of her new album), but other than that minor influence it’s utterly thrilling, all glistening menace and humming, crackling intent.

Elsewhere on the EP, you’ll find Dead Editors (featuring Roots Manuva), a strange, glitchy beast, with great whorls of sub bass and strange eerie top notes, with Manuva effortlessly drifting over the top in fluent form, before a terrifically uneasy breakdown. It closes out with Take It There, a taut, cynical track driven by a slab of a piano line, while Tricky and del Naja sneer their way through the vocals.

This is a thrilling four-track treat from a band who are clearly comfortable in their silences and there is plenty more to come. Ritual Spirit was written and produced by Robert del Naja with long-term studio collaborator Euan Dickinson. A second Massive Attack EP, written and co-produced by Grant Marshall, is in the pipeline, with an album to follow later in the year.

Although the delivery of the EP might be different, the soundscape contains no radical departures for MA. And when it comes to the live visuals, the band could still be touring 100th Window. In 2003, when the band played the Point Theatre, the digital backdrop streamed military statistics from the then-months-old war in Iraq, statistics on the global population, and snippets of news culled from the international and local press.

Last week at the Olympia Theatre this had hardly changed. The military statistics were replaced with big pharma logos and prices; headlines from Irish and British media popped up sporadically, including one, brilliantly, from Waterford Whispers News (“Government buys 5,000 pots for homeless to piss in”); and the show ended with images of refugees taken by Giles Duley and the logo of the UNHCR.

The performance on the night was rusty in places and lacked the consistent siege mentality of a typical Massive Attack show. This is unsurprising given that it was the first night of a European tour and the band had new tracks to contend with (and this is before you factor in their complex set-up).

Some of their more classic tracks had been cleverly reworked, with melodic shifts in tone and emphasis. But the visuals, which seem intrinsic to an MA show, are clunky. What’s the point of randomly flashing up pharmaceutical prices? Compare them with their costs of production and it could turn into something meaningful, but in isolation they just seem to pointlessly yell “Ya boo big pharma.” Whoever collates the media headlines might also need to parse them for irony, and showing images of refugees to a Massive Attack audience, although well intentioned, certainly seems like preaching to the converted.

Another section flashed up requests for log-in names, passwords and personal information. What seemed like an edgy critique of encroaching social media in the mid-2000s now feels like an awkward friend request from an older relative. When Robert del Naja mentions the show having “some new content”, you can’t help but wonder who MA are trying to skewer.

Not that this matters much to the music. The band have been hard at in the studio, and all the evidence is that they are about to return with an album of presence and power. The musical template hasn’t been reworked, but that hasn’t detracted from their ability to produce some of the most potent music around. But as Massive Attack prepare to unveil their new machine, perhaps it’s time to retire the creaky party political broadcast.