These ‘Good Friday agreement babies’ rap in Irish, and even the Troubles are fair game 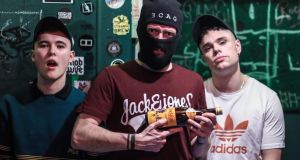 Kneecap: ‘Because we’re detached from it [the Troubles] in that sense, we can look at it with a different perspective’

Kneecap are two MCs, Móglaí Bap and Mo Chara, along with DJ Provaí, who have become an underground hit, earning praise from fellow rappers within the exhilarating Irish hip-hop scene.

The west Belfast group began when Móglaí Bap was out spray-painting with a friend on the eve of an Irish Language Act march in Belfast. He had written “Cearta” on a bus stop when the police arrived and lifted his friend. Móglaí Bap managed to escape. Their friend refused to speak English to the police, and ended up spending a night in the cells awaiting a translator. The incident inspired their song C.E.A.R.T.A, which they intended to release “just for the craic. No plans for after,” Mo Chara says. “Stick the feelers out and see how it would go down. Luckily people enjoyed it, so we’re still at it.”

There has been controversy. They were taken off stage during a gig at UCD, and when Christopher Stalford of the DUP criticised Kneecap’s performance at the Empire in Belfast “literally the day after the Duke and Duchess of Cambridge were there”, Kneecap responded by uploading an “official statement” video responding to Stalford’s comments, a slo-mo of Mo Chara raising his middle finger to the soundtrack of a dance remix of Come Out Ye Black and Tans.

Nothing is safe from having the piss taken out of it. It’s all in the equation

Over afternoon pints of Guinness in Grogan’s pub in Dublin (“Do youse ever leave this place?” a passing barman asks when he spots them), Kneecap recount their musical beginnings. As a kid, Mo Chara listened to old-school hip hop with his uncle as they drove to Donegal. His love for NWA morphed into a grá for the Stone Roses: “I never left the house without a bucket hat when I was 15.” When Móglaí Bap was six, his brother asked him what his favourite song was. He replied Kinky Boots by the Irish Brigade, a send-up of the British army.

“My influences are definitely rebel songs,” Móglaí Bap says. “A lot of them are very satirical, there’s a lot of humour in them … It’s definitely had a big influence in that idea of turning something dark into something funny.”

It is not unusual for tunes to be laced with stories of drug-fuelled nights out, but for these to be articulated in the Irish language is central to Kneecap’s artistry. The results are dizzying, funny, surprising, cutting. Kneecap’s latest track, H.O.O.D., qualifies one of its mid-song rallying calls (“Tiocfaidh ár lá, get the Brits out, lad”) with the chorus, “I’m a hood, double-O-D, low-life scum that’s what they say about me.”

Whether it’s Skepta lampooning the aversion to “young men all dressed in black dancing extremely aggressively” on Shutdown, or Kojaque saying “Just one more knacker up off the streets, that’s what they say, right?” on White Noise, the art of pre-emptive strike against the dismissal of young men that emanates from certain quarters – who say the art is distasteful when really they mean the people making it are – is central to the rapper as jester, always one step ahead. “White America! I could be one of your kids,” was Eminem’s 2002 clarion call.

From downer Soundcloud emo-tinged rap to the meandering stream of consciousness of mumble rap, and the staccato declarations of trap, rap lyrics in 2019 can often feel like games of exquisite corpse. Kneecap’s approach is almost old-fashioned, reneging on the borderless lyrical collage some contemporary rappers lean into, and instead rooting lyrics in storytelling, specificity, slang, geography, territory, representation and identity.

With this is another callback: rap as a voice of opposition and in opposition to the perceived establishment, the powers that be, and the controlling forces of a micro-society or community they exist within. Contemporary urban Irish is primed for this, where outside of Gaeltacht areas it often emerges as a sort of linguistic lattice, multiple overlaps of the code of clubbing and session culture, in-jokes and the dexterous linguistic turns that make words and sentiments malleable, even esoteric. As a result, Kneecap create multiple entry points and numerous levels of interpretation. Móglaí Bap at one point refers to the voices in their tracks as “these two characters”. Assuming an identity that acts as a sidekick to or the devil-on-the-shoulder of one’s authentic or private personality is a mainstay of hip-hop, where monikers abound and concept albums never went out to fashion. Mo Chara slips into a Mango lyric from Badman: “You’re not from here, you won’t get this.”

Mo Chara describes them as “Good Friday agreement babies”. “Because we’re detached from it [the Troubles] in that sense,” Móglaí Bap says, “we can look at it with a different perspective. We didn’t experience it first hand in the way our parents did. They had a traumatic experience. We can detach ourselves from it and look at it in a more whole context.”

Mo Chara agrees: “I think that’s what gives us the freedom to push the boat out just that bit more.”

Móglaí Bap says: “They couldn’t talk about this stuff. A lot of people carry that trauma still. For us, we take this opportunity to actually have a joke about it and look at everything and discuss it all, that’s what our point is: nothing is safe from having the piss taken out of it. It’s all in the equation.”