Set list, stage times, tickets, will there be riot and more for the indie-pop-rockers’ night in Dublin 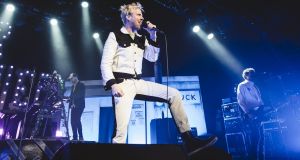 Some 20 years after they formed in Leeds, 15 years after they scored a Top 10 UK hit with I Predict a Riot and less than one year after their UK Top Three album, Duck, it seems Kaiser Chiefs have weathered various storms over the past two decades. They are not, then, a critics’ choice but rather a people’s music act, and one with at least 10 songs that can make a gig pass by with a hum and a whistle. – Tony Clayton Lea

On Sunday, February 23rd, at 3Arena in Dublin.

Tickets are available on Ticketmaster. Concertgoers are advised to buy tickets from accredited sources only.

What time should I arrive and what are the stage times?

Doors open at 6.30pm. Support acts are emerging – and most interesting – Irish act Somebody’s Child, who are expected on stage before 7pm, followed by Razorlight (8pm), with Kaiser Chiefs making their entrance at about 9pm. Times are subject to change.

What songs will Kaiser Chiefs play?

All bags will be searched at the door. Bottles, cans, selfie sticks, large umbrellas, iPads and other tablets, video cameras, professional cameras, audio recorders, GoPros, large posters (A3 or bigger), large flags on poles, belt chains and laser pointers are prohibited, along with anything that could be seen as a weapon. Large bags, backpacks and suitcases aren’t allowed into the arena, and there are no cloakroom facilities. With all this in mind, best to pack light and just bring what you need. Under 16s must be accompanied by an adult (over 18) and the standing area is strictly over 14s only.