Jehnny Beth: ‘There is something very cool about Irish people’

The Savages singer talks about being bisexual, leaving the UK and Cillian Murphy, who features on her new solo album To Love Is To Live 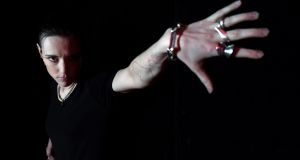 Jehnny Beth had always aspired to doing something outside Savages. Photograph: Alain Jocard/AFP via Getty Images

Bisexuality has historically been more visible in pop than anywhere else. But the number of high-profile musicians prepared to publicly identify in such terms is still relatively modest. That’s why Jehnny Beth, erstwhile leader of post-punk wrecking-balls Savages and newly minted solo artist, feels it is important to speak out about being bi.

“I grew up being attracted to both sexes. I didn’t have anyone who talked about it. I felt quite anxious for many years. I felt I couldn’t fit in in any sort of scenarios. And that everything I was chasing was a lie. So that’s why I mention it.”

So that if a young person is struggling, as she did growing up in provincial France, they might perhaps read her words and know it isn’t just them? “If I can help someone feel less alone,” nods Beth (35). “I wish I didn’t have to. It’s not really that I want to share my personal life.”

Has she been following the row between actor and campaigner Jameela Jamil and Father Ted writer Graham Linehan? (Jamil, who is in a relationship with musician James Blake, said in April that she identified as queer. Linehan tweeted she was guilty of “appropriation”. Jamil responded that he was a t**t. And at that the internet exploded.)

Beth seems unfamiliar with Linehan, his oeuvre or his take on sexual politics. But she clearly feels it is important that individuals with a public profile speak out, as Jamil is doing.

“There are some people who talk about it. Joe Lycett [the comedian] talking about being pansexual. It’s a little more out there than it used to be,” she says. “But it’s something that can be hard to comprehend.”

Beth, who is about to release a by turns cathartic, big-hearted and pummelling solo record, To Love Is to Live, is delighted to be talking to someone from Ireland. “There is something very cool about Irish people,” she says.

“Very down to earth – especially Irish men. I’ve found they are very…” she pauses, gathering her thoughts. “They are able to show love in a special way, in a grounded way.”

This interview was conducted prior to the release of blockbusting romantic drama Normal People. Heavens knows how much further Beth’s opinion of Irish men has been raised now that the Ballad of Marianne and Connell has elevated the archetypal monosyllabic GAA star into the platonic ideal of international hunkdom.

One of her friends, she continues, is Cillian Murphy, aka flat-capped Peaky Blinders anti-hero Tommy Shelby. There is, perhaps uncoincidentally, something very Tommy Shelby about Beth’s music, her new material in particular.

The songs on To Love Is to Live are highly-stylised, often deeply sensitive, yet with a whiff of violence. Consider single I’m the Man, where Beth roars the chorus against a dramatic caterwaul of guitars. It is easy to imagine it blaring in the background as a gangster in old-school headgear strides towards the camera in Tarantino-style slow motion. This is Peaky Blinders pop with the safety-catch off.

I’m the Man’s high-kicking oomph is accentuated by the accompanying video, overseen by Dubliner – and, yes, Peaky Blinders director –  Anthony Byrne. In it Beth snarls at the camera and then menaces people eating chips and hanging outside the pub. In this weird moment in history, it makes you yearn for the days you could eat chips outside a boozer and potentially be growled at by a French post-punk pop star.

It’s feral and irresistible. One thing Beth wants to clarify, however, is that the message of I’m the Man isn’t gendered.

She isn’t taking potshots at masculinity, toxic or otherwise. The point of both song and video is that within all of us are dark and untamed forces. I’m the Man is about wrestling those demons. “The song is about the balance which is in all of us. This destructive force. This desire to eat, to crash, to destroy, to beat. All the active energies. I have them too. That’s what I want to represent.”

She met Byrne backstage at a London gig by Idles. He was about to start on the latest season of Peaky Blinders. Beth mentioned that she knew Murphy. And so a plan came together to have the actor read A Place Above, the spoken word piece with which I’m The Man opens.

“See rivers of blood, the endless cruelties, the manipulations and the fears,” intones Murphy in his brooding Cork accent, over a creeping piano. “See the delusions of those succeed, their imagined self-importance, see the most powerful man raise his hand to tell us a lie.”

“I knew he was a fan,” says Beth. “We met a few months later. He was in London. We met at his hotel. He set up in the room. I don’t really direct him. He directed himself. He was brilliant, the way he did it. He said the text was big stuff. So he needed to do it in a quiet way. He made it very personal. It’s like you are sitting on the Tube and you look at someone else and it’s as if you have access to their mind. The way Cillian spoke, it was like having access to someone’s thoughts.”

Beth was born Camille Berthomier and grew up in Poitiers, a city of 90,000 in west-central France. Her parents were theatre directors; one of her earliest stage experiences was playing the lead role in Ibsen’s Peer Gynt. It was also in Poitiers that she met her long-term musical collaborator, Nicolas Congé, aka Johnny Hostile.

As Johnny and Jehn, they released two well-received albums. Beth also appeared in a few low-budget movies: À Travers la Forêt was a thriller about mistaken identify; Sodium Babies was a vampire caper described by the Internet Movie Database as “Sin City and True Blood spiced with the pathology of Fight Club”.

She and Hostile, with whom she is in an open relationship, moved to London when she was 20. In 2011, she formed Savages with guitarist Gemma Thompson and bassist Ayse Hassan (Hostile declined the opportunity to join).

Savages were an immediate sensation. Their 2013 debut, Silence Yourself, made the UK top 20 (and the Irish Top 40) and was nominated for the Mercury Prize. A second Mercury nod followed three years later with the release of Adore Life, praised by Rolling Stone for being “driven by emotions that are almost unprecedented in the [post-punk] genre”.

Beth is not an artist to stand still. Savages played their last gig in 2017 (the group remain open-minded about their future). By then Beth, with Hostile in tow, had already left London for Paris, where she took up boxing and thought about a solo LP.

She was eager for fresh challenges and new experiences. The death of David Bowie had shaken her, caused her to question where she was going with her life. Brexit didn’t help. However, she had already packed her bags when the UK voted to give two fingers to the rest of Europe.

“I left just before it started,” she says. “I wasn’t surprised. It’s been so long coming. The British wanted to try to be independent and [also] have some ‘play’ in Europe but not really. I’m just sad obviously. I was 15 when I went to England for the first time. I moved there properly when I was 20. I didn’t have to show any papers, didn’t have to pay anything. Thank God I got the opportunity. There are a lot of people in my situation right now who won’t have that option.”

Beth is speaking from France, where she is spending her lockdown. Her parents are Catholic; it has been suggested that – pauses to roll eyes – “Catholic guilt” might be part of her creative make-up.

“Everyone is baptised in my family,” she says, not sounding especially crippled with theological shame. “I was not. But I used to go to church as a kid with my grandma. She got me a Bible. I used to pray. I know the story of Jesus. I was raised Catholic without really being institutionalised.”

The muscle memory of faith helped her make the new LP, which features production from U2/ Depeche Mode collaborator Flood, Romy Madley Croft of the xx and Atticus Ross of Nine Inch Nails. She had always aspired to doing something outside Savages. And when Bowie died she was reminded that all of us, pop stars and everyday people alike, get only one chance to live our best lives.

Religion, she says, helped anchor her as she confronted these existential issues.

“Going through this record, thinking about mortality and death… I do think that without the idea of religion you don’t have a place for death to exist,” she says. “I understand a need for spirituality. I wish I could pray.”

“We spend a lot of time forgetting we are going to die,” Beth continues. “When we are reminded, it’s a moment of exposure. Suddenly you feel quite vulnerable. It’s sort of frightening as much as it’s inspiring. In these moments you feel you can love more, that you can give more.

“Making the record, I tried to remind myself of that. I couldn’t shake the feeling of my mortality, all through doing it. I felt it was important that I do this before I died. I started to breathe again when it was finished.”

To Love Is to Live is released June 12.