The best of the week’s classical music 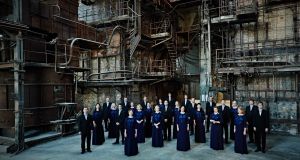 It’s just over 10 years since the Estonian Philharmonic Chamber Choir was last in Ireland, to tour a programme with Arvo Pärt’s Kanon Pokajanen. The choir’s current visit, with Kaspars Putninš conducting, is part of the celebration of the centenary of the foundation of the Republic of Estonia, and the choir is giving Pärt pride of place with a selection of seven works – Solfeggio, Summa, Magnificat, Zwei Beter, The Woman with the Alabaster Box, Nunc dimittis and Dopo la vittoria. Irish composer Conor O’Reilly’s Pie Jesu is also featured, along with works by Cyrillus Kreek, Galina Grigorjeva, and Veljo Tormis.

The Vanbrugh String Quartet is no more, since the retirement of the group’s leader, Gregory Ellis. But the three remaining players – violinist Keith Pascoe, viola player Simon Aspell and cellist Christopher Marwood – have regrouped as The Vanbrugh and they’re back on the road for a nine-stop tour that will run until Saturday, February 10th. They’re not going to play trios and they won’t be alone on the stage. They’re being joined by pianist Michael McHale for a programme of piano quartets by Mozart (K478 in G minor), Stanford (the Piano Quartet No 1 in F) and Dvorák (his early Piano Quartet in D, Op 23). And after their opening night in Cork they’re travelling to Wexford, Tullynally Castle, Enniskillen, Clifden, Listowel, Waterford, Limerick and Dún Laoghaire.

It has to be a first. The RTÉ NSO is devoting an evening to the music of a most unusual pairing, Jean-Philippe Rameau and Wolfgang Amadeus Mozart. And the evening is in the hands of an early music specialist, Harry Bicket, who will be making his NSO conducting debut. The programme is framed by suites of dances from Rameau’s operas, a set from Platée (1745) to open and a much more substantial one from Les Boréades (1763) to end. In between there’s Mozart, the Serenata notturna and three contrasted arias from Irish soprano Anna Devin. Devin comes to the NSO fresh from her success at The Big Bang! concert which launched the new Irish National Company on January 9th.

Naoise Dolan’s Exciting Times to be adapted for TV
7