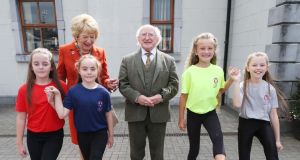 More than 400,000 people are expected to visit Drogheda, Co Louth, for the annual Fleadh Cheoil traditional Irish music festival over the next week.

This year’s event sees the weeklong festival being held in the Co Louth town for the first time.

Musical acts lined up to play at the festival include Martin Hayes, Damien Dempsey, Zoë Conway, and Dennis Cahill. Irish trad band Stockton’s Wing will also reunite at the festival for a rare performance.

The event runs from Sunday, August 12th, to the 19th, and organisers said they expected that 30 per cent of visitors will have travelled from overseas for the festival.

The opening concert will see a regional showcase of musical talent from the northeast, including sean nós, trad, fiddle and banjo acts.

There will be Irish language conversation classes each morning, to encourage people to learn and speak a cupla focal as Gaeilge, walking tours of Drogheda, and a wide range of music gigs.

The National Folk Orchestra of Ireland will perform on Friday, while there will be a céilí battle of the bands competition in the Fleadh Concert Dome on the final night of the festival.

More than 1,000 volunteers will help run the festival over the course of the week. Drogheda town will be pedestrianised for the event, and organisers of the festival have encouraged people to travel by public transport to the town.

The festival has set up park-and-ride facilities for those who do travel by car, with shuttle buses in operation. Iarnród Éireann is running additional trains to Drogheda for the event, including extra evening trains at 11pm and 1am.

On Sunday President Michael D Higgins was to open the music festival officially, with his wife Sabina.

Businessman Gavin Duffy, who is seeking a nomination to contest the presidential election, will also attend the Drogheda festival.

Mr Duffy, who is from the Co Louth town, put up a billboard poster in the town ahead of the festival. The poster features Mr Duffy’s face, and says: “Céad míle fáilte go Droichead Átha (Drogheda), August 12th to 19th.”

In a post on Twitter Mr Duffy said the “signage is a Céad Míle Fáilte to Drogheda from me personally with no reference to the election and . . . with no Fleadh logo or livery”.

Mr Duffy said he had rented an office in the town which would serve free tea and coffee to people during the festival. The Dragon’s Den entrepreneur tweeted that the office “will have no Fleadh Logo or association with the Fleadh”.