‘The music teacher said to me: you haven’t a musical note in your body’

With six albums under his belt, a new record and a book on the way, Derry native Tony Wright is flourishing creatively like never before 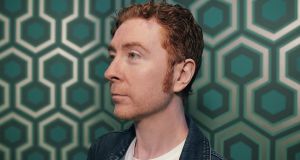 Tony Wright still remembers the day his music teacher told him exactly what he didn’t want to hear. “I remember going for orchestra tryouts in primary school when I was eight, and doing the key test – and because I was so nervous, I did terribly. The music teacher said to me ‘You haven’t got a musical note in your body – you should maybe think about sticking to sports’. I was absolutely devastated and when my mum picked me up from school, she was aghast that a music teacher would discourage a child like that.” Luckily, his mum had an idea. “She took me home and dusted down her old nylon string guitar, and taught me how to play John Denver and Bob Dylan and Joan Baez songs. When I was 11 I got an electric guitar . . . and that’s how it all started, really.

If that teacher could see Wright now, she’d be eating her words with a side of lemons. The Derry native has six albums under his belt – a combination of his former band, collaborations and solo material – and is currently the artist-in-residence at Belfast arts centre, the MAC. His latest record has just been released in order to help fund his forthcoming first book. Just as well he didn’t take her advice.

Wright is perhaps best known for his time in And So I Watch You From Afar, the Belfast-based band that he was instrumental in co-founding in 2005. After two albums, he left in 2011 in somewhat acrimonious circumstances that he is reluctant to discuss – there is “some stuff” that is still going on, he says – but is clearly proud of what he achieved with them, nonetheless. His solo vehicle, VerseChorusVerse, however, is a very different musical prospect. Previously known as a virtuosic guitarist, his scaled-down, predominantly acoustic fare meant it took some grafting to get people interested in what he was doing.

“It was initially a side project – just something for me to do when I was off tour – but then it became the going concern,” he explains. “I think I surprised people, myself included. Even reviewers that would have been into my stuff in the past now suddenly had no interest; it was like ‘Oh. You’re a ‘troubadour’ now. That’s not really what we do; we’re into experimental alternative things’ – even though I was experimenting with the singer-songwriter form. Looking back now, I totally get it, but I just couldn’t get my head around it at the time. I’d be thinking ‘Why? Six months ago they were my best friend, but now they won’t answer phone calls’. I definitely felt I went down a few rungs of the ladder. And I think a lot of people thought that maybe ego was the reason I was doing it, but it certainly wasn’t. I just wanted to continue doing music, because it’s all I’ve ever done.”

He calls his third and latest solo album, Outro’ “the best thing I’ve done since the first And So I Watch You . . . record. And it’s me going back to playing the electric again after a good while away from it.”

He recorded it in a “haunted manor house” in Cushendun on the north Antrim coast, where he admits he had some odd experiences.

“I was in there one night alone, and there was this big nasty guard dog called Tor who hated me – as any good guard dog should – and barked at me constantly,” he laughs. “I set up the recording equipment upstairs, then set my guitar down for a minute – but all at once, there was a surge; some feedback in my headphones. At that exact moment, a string on my acoustic guitar broke without being touched; in all my years of playing guitar, I’ve never seen that. And also at that same moment, the dog stopped barking. I’d always been quite sceptical about these things, but I was sitting there shitting myself,” he laughs. “Like any good millennial, I immediately went on Facebook to ask ‘Does anyone know what’s going on?!’. A friend of mine who’s a practising pagan said ‘Oh, it sounds like there are definitely spirits there, but they’ve probably never seen a home recording system before and they’re just curious. Just speak to them and let them know you’re happy to be in their house’. Then the dog came in and sat down beside me and was totally cool with me, all of a sudden. After that, I believed in ghosts.”

Wright decided to release the album – which he describes as “a sort of soundtrack to an unmade sci-fi horror movie” – guerilla-style, in order to help fund the publication of that aforementioned debut book, tentatively called Chapter & VerseChorusVerse: Another D*ckhead on the Road (the subtitle is a reference to his dad’s amusing reaction to him passing his driving test a few years ago). Part-memoir, part-road trip document and part-philosophical musing, it was written about a trip he took to the US in 2016, when he was unsure of his path and whether he wanted to – or even could – continue to pursue a career in music.

“It was basically a very transitionary time in my life; I was going over there as a creatively and artistically-minded person, thinking ‘What the f**k am I doing?,” he smiles. “I’ve been lucky enough to see most of the northern hemisphere because of music, and the impact of my old band is global, in a sense – but it’s weird, because I feel so disconnected from that. It’s the band I formed, but so many people who are into that band have no idea who I am. There was this sense of introspection, of me thinking ‘Am I really gonna keep doing this?’ The only time I’d been to America before was with the guys, so I was going over with a different kind of mindset; discovering myself as a musician, and figuring out ‘Is this what I’m meant to do with my life?’”

Several instances and interventions of fate – including an encounter with ’60s band The Zombies in New York and a few unexpected support slots with gypsy-punk band Gogol Bordello in California – set him on the right path, and were sufficiently life-changing to commit to paper. Having been open about his struggles with mental health in the past, the book continues that trend.

“I think it’s funny, and the guy who edited thought it was funny, anyway,” he chuckles. “It’s me looking at it through the goggles of someone who’s had mental-health issues, but who has also spent his entire adult life dedicated to this artform, and going ‘I can’t decide whether I’m richer or poorer for it’. I’m definitely richer, I see that now – but I had to go through this to find that out.”

He plans to tour both the book and the album as part of a theatre show – which was road-tested to great success on a Belfast audience earlier this year – countrywide from October onwards, with a launch taking place at the MAC (coincidentally, where the first chapter is set). With a small acting role in forthcoming Bert Trautmann footballing biopic Trautmann under his belt and a comedy web series called The Also Rans recently launched “about two deluded thirtysomething musicians trying to break back into the music industry”, it sounds like Wright is flourishing creatively like never before.

“I’ve got that kind of wide-eyed excitement back, in a way,” he agrees. “I think up until now, I’ve kind of been dancing to the industry’s tune and doing what I needed to do in order to get plucked up and get signed with a big label, or whatever. But now, when I see that happen, it seems more like Hunger Games to me, or something – like getting put on an island and forced to kill other artists,” he laughs. “It doesn’t appeal to me the way it once did. So I guess now, I’m really just kind of enjoying seeing what unfolds. Like George McFly said: ‘If you put your mind to it, you can achieve anything.’”

Outro is out now