Fear and apathy at the end of the world 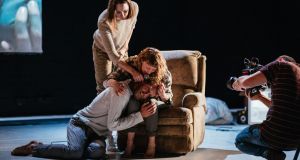 For choreographer Liv O’Donoghue looking back is as important as looking forward. This year’s Dublin Dance Festival will highlight her skills as an archivist as well as the creator of a grim end-of-world drama.

In AFTER, she confronts impending environmental degradation, but rather than indulging in apocalyptic sci-fi fantasy, she concentrates on the earth’s final days and hours through the eyes of two individuals.

“I didn’t want to ask why the end of the world was happening or how it was happening. Rather what would it feel like and what would you do? Would your relationships crack under the pressure,” she says.

Timely and weighty, the artistic impetus came in 2016, as increasingly alarming reports of irreversible climate change paralleled with a shift in global politics and the election of climate change deniers.

“There seemed to be a collective feeling of fear combined with apathy and paralysis. People didn’t know what to do. The rules changed and the goalposts shifted,” she says.

Her mother’s advice was always to confront fear and so O’Donoghue confronted it how she best: she created a performance.

O’Donoghue initially trained as a dancer. Her alma mater, Northern School of Contemporary Dance in Leeds, is known more for an exhaustive focus on technique rather than genre fluid creativity. This shaped her earliest dances, which fore-fronted movement as the primary means of expression: dancers performing beguiling movement in a blank space.

Through the years, she has danced for other Irish choreographers, but artistic curiosity - and economic realities - also saw her collaborating with composers and theatre makers, like Gina Moxley. These experiences have expanded her artistic palette so that the purer movement found in her initial work now shares the stage with text and props. AFTER incorporates a set, text, live and pre-recorded video, and was nominated for Best Design at last year’s Dublin Fringe Festival.

What has remained constant is her fascination with human behaviour, especially under heightened circumstances. In Hear Me Sing Your Song (2013) each performance includes a different non-dancer unknown to the cast, adding an edgy uncertainty to the proceedings.

In order to explore how the two characters in AFTER would cope with the end of the world, the cast (O’Donoghue with Kip Johnson, Clara Simpson and José Miguel Jiménez) undertook isolating residencies in Austria and Norway. Based in a small cabin near Hammerfest, 600 km inside the Arctic Circle, the near absolute polar darkness heightened the sense of isolation.

“Throwing ourselves into this dark no-mans land, meant that what we created was seeded in this reality and the relationship between the two characters became very real. We were able to tap into that energy. The claustrophobia, the fear, the darkness closing in.” Developing characters was a new process for O’Donoghue, as her previous work featured more anonymous dancers. But AFTER is no play.

“Genre has become so redundant, particularly in the past 10 years or so, because there is so much crossover.”

It’s a sentiment that led to the creating of the project DRAFF, a living archive of the creative process regardless of genre. Along with writer Rachel Donnelly and filmmaker José Miguel Jiménez, they have published interviews, reviews, profiles and reflections by artists, both in print and online. The writings highlight what is hidden rather that what the audience see: the creative thinking and process that is not perceptible in the performance.

“DRAFF emerged as a recognition of the richness behind every piece of work. You collect so much stuff that what makes the final cut is almost a disappointment,” she says. “I’ve alway felt that the world of my work is much bigger that the work itself.”

Creative solutions were needed to depict this hidden work. In 2015 DRAFF presented exhibitions as part of Dublin Dance Festival, comprising of elegant miniature portraits of choreographers made up of self-selected images, sounds and a three-dimensional object neatly set into a common template. This year DRAFF will take over Project Cube for workshops and exchanges with Aimar Pérez Galí, Nora Chipaumire and Sarah Venhee.

“We choose them not because we are huge fans, but we wanted to give a sense of how work is being made now. What is inspiring or challenging?” Teaming up with Dublin Digital Radio, the DRAFF team are also presenting a night of music with sound designer Kevin Gleeson and a Dublin debut for the house set that photographer Luca Trufferelli has been touring with Oona Doherty’s Hope Hunt.

“Artists are used to crossing borders, both real and metaphoric,” O’Donoghue says. “DRAFF is trying to find the connections between people rather that differences. In many ways its the same flashpoints of societal tension that we are all fighting against, so it is really important that boundaries are dissolved.”

AFTER runs May 9th at Mermaid Arts Centre, Bray and May 10th at Draíocht, Blanchardstown. DRAFF:Cube Takeover runs May 14th to 16th, and Sound Stage: New Music runs May 16th, both at Project Arts Centre. dublindancefestival.ie

Spectacle is vital for any successful festival, but this year’s Dublin Dance Festival also offers plenty of quieter reflection and engagement with social issues. Opening night sees a Dublin return for thisispopbaby’s RIOT, which offers a full-on blast of both spectacle and politics, but elsewhere in the festival there is clear curatorial vision from artistic director Benjamin Perchet. Under the banner “Party, Politics and Power” the programme offers several routes of entry into contemporary dance, either as viewer or participant.

In the “worth the wait” category are Irish premieres of Anne Teresa de Keersmaeker’s Rosas danst Rosas (1983), Virgilio Sieni’s La Natura Delle Cose (2008) and Roberto Castello’s We go around at night consumed by fire (2015), while repeat performances of three of last year’s Irish dance hits offer second chances to see Liz Roche’s I/THOU, John Scott’s Inventions and Liv O’Donoghue’s AFTER. Get ahead of the game with sneaky peeks of works-in-development by David Bolger, Lucia Kickham, Deirdre Griffin and Emma Martin.

After a quiet premiere in Rennes in February, the unusual collaboration between ex-Riverdancer Colin Dunne and Belgian-Moroccan Sidi Larbi Cherokaoia has already piqued international attention, and Phoenix by Shonen and artists from Palestine uses drones to depict both childlike play and sickening warfare.

As usual, kids are well served with performances and Donal Dineen’s DJ set for under 10s, while older folk can head to the Top 8 Street Dance Battle at Meeting House Square. Along with talks, workshops and classes, the festival probably succeeds in being all things to all people.

One ping after another: Why we all need a notification detox
7