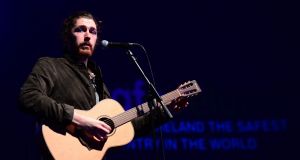 Hozier is among the nominations for this year’s Ivor Novello Awards.

The Irish singer has been nominated for the best song musically and lyrically prize for Nina Cried Power.

He faces competition in the category from Arctic Monkeys’ Four Out Of Five, penned by frontman Alex Turner, and Ben Howard’s Nica Libres At Dusk.

Winners will be announced at a star-studded event at Grosvenor House in London on May 23rd.

Crispin Hunt, chairman of The Ivors Academy, said: “The works nominated for The Ivors 2019 are brilliantly diverse, and we’re delighted to see so many first-time nominees recognised.

“As the only peer-nominated music awards in the country, they are a fantastic reflection of the exciting emerging talent of British and Irish music creators today.”

Works eligible for the awards had to have been commercially released in the UK in 2018 and have a British or Irish songwriting or composing contribution of at least one-third. – PA