Why does Irish music on the radio seem to begin and end with Hozier?

PlayIrish, a new digital radio station, aims to get small Irish acts the recognition they deserve 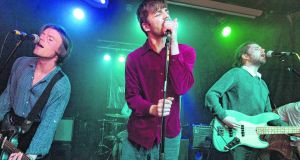 Are you getting your recommended daily dose of Irish music? Have you ever wondered why Irish radio stations don’t play more Irish music? (Ed Sheeran’s Galway Girl doesn’t count.) And why does Irish music on the radio seem to begin and end with Hozier, Kodaline and Picture This?

For many up-and-coming Irish acts, radio has often seemed like hostile territory. A band may have many loyal followers on Twitter or Instagram, they may get lots of listeners on Soundcloud or Bandcamp, but when it comes to getting airplay, that’s where things don’t really click. It’s hard to compete with George Ezra and Marshmello in the battle for radio listeners’ ears.

Not that the airwaves are a complete wasteland for Irish rock. Ed Smith and Paul McLoone on Today FM, Tom Dunne on Newstalk and Peter Devlin on Radio Nova are among those broadcasters regularly giving Irish music a fair hearing. But though you’re likely to hear the new Ariana Grande song a dozen times on the radio on any given day, you’d be lucky to catch a Soulé tune once in a blue moon.

But now a trio of Irish music industry professionals have got together to try to redress the balance and get more Irish music to Irish and international ears via a new dedicated digital radio station. Turn on your Radioplayer app, turn the dial to PlayIrish, and you can listen non-stop to music by Dermot Kennedy, Soak, The Gloaming, Kojaque, Jafaris and Fontaines DC, alongside classic tunes by Gemma Hayes, A House, The Blades, The Divine Comedy and The Pale.

PlayIrish is the result of a collaboration between three well-known music industry figures: Sinéad Troy of the Irish Association of Songwriters and Composers (Iasca); Peter McPartlin, former chief executive of Today FM and TXFM; and Angela Dorgan of First Music Contact and Music from Ireland, who is best known as the organiser of the annual Hard Working Class Heroes indie bandfest. What all three have in common is a passion for home-grown music, and a desire to help new Irish artists get a foot on the ladder towards global success.

“Ireland is sandwiched between two of the biggest music markets in the world, but the pathway to those markets has hit a bottleneck,” says Troy. “We need to widen that bottleneck and get more bands moving on to bigger things. It’s great that Glen Hansard and Damien Dempsey can fill Vicar Street, but they should be filling the 3 Arena. You can’t leap from your own territory without first doing well in your own territory, and although there are many routes to getting your music to audiences, for most Irish bands it’s about airplay.”

Rather than sit around complaining about the lack of opportunities for new Irish acts, Troy decided that the independent music industry needed to “get it’s shit together” and create those opportunities.

“It’s easy to blame radio stations for the lack of airplay, but the independent music scene is disjointed and fragmented, with a lot of people working solo, and very little co-ordination.”

In 2015, Iasca signed a deal with Canadian digital media management company Yangaroo, allowing Irish artists to use its online music-delivery platform to send their music directly to DJs, radio programmers, journalists and other industry people.

“Brian Adams, [head of music] at Today FM, gets Rihanna seamlessly into his inbox from Universal Music Group. Because his time is precious, Brian just has to click one button to listen to a song and decide if he likes it or not. Whereas the independent community is so all over the place – ‘How do I send an MP3?’, ‘What format?’ – it was chaotic and that’s why lots of bands lost airplay. My thought is, if Rihanna can just be delivered into a radio programmer’s inbox, then why can’t all the Irish artists be too?”

But in an increasingly busy broadcasting arena, new Irish artists needed a champion to fight their corner, and so, with help from Independent Broadcasters of Ireland, PlayIrish radio was launched at the end of last month.

“[The app] Radioplayer has all the main Irish radio stations, the independent stations, and it’s not geo-blocked, so I have a little brother in Boston and one in Perth who are tuning in to PlayIrish radio. That’s a good thing.”

Some might baulk at the idea of listening to exclusively Irish music on their radio. I mean, what’s the point in playing the latest Hozier song if you can’t also play one of the myriad international artists he name-drops in his songs? And why would you play Ash but not Supergrass? Troy’s answer is that PlayIrish is not designed to be on 24-7, but to act as a broadcast barometer for the healthy state of Irish recording and songwriting.

Crucially, the station is designed for musicians and music industry people to tune in and check out the latest Irish bangers. There are no prattling jocks to get in the way of the tunes, and the playlists are curated not by algorithms but by people who like their music and know what’s worthy of a second listen.

“I want to put small bands on PlayIrish radio, and get people talking about them and liking them. We’re monitored by a radio monitor, so radio stations can see who’s on our A, B, C and D lists. It’s almost like the industry saying these artists are brilliant. There’s an artist that we’ve been playing who I hadn’t heard before, Anna Mullarkey, and she’s phenomenal. Every time I hear her, I think, Oh my God, why aren’t more people listening to this? Also JyellowL, he’s incredible. So that’s what it’s all about, having a showcase for the music.

“Irish music is Irish jobs, and if we don’t really start shining a light on our musical industry, we’re going to lose it, and we’re going to lose all the jobs around it, all these businesses who depend on musicians for their survival. For years we’ve talked about Irish food. And it’s true, if you buy the Happy Pear’s granola, you are contributing to the Irish food industry. And if you buy Glen Hansard’s album, of a ticket to a gig at Whelans, you are contributing to the Irish music industry.”

What qualifies as Irish?

Which brings us to a sticky question: how you define what is Irish music? Do Noel and Liam Gallagher qualify because of Irish parentage? Does being born in Limerick make Aphex Twin an Irish artist? Does having a member from Mullingar make One Direction an Irish band? And are immigrants and asylum seekers disqualified because they are not originally from here? For Troy, the solution is to strike a sensible balance.

“We’ve done it like the Canadian system. It’s a points system. If you’re Irish, or if you have an Irish passport, you’re three points. And, say, if you’re Rodrigo y Gabriela, and you have an Irish manager, an Irish label, and you record in Ireland, that’s three points. Kylie Minogue coming in and recording in an Irish studio does not make it Irish music. And while Niall Horan would fit the definition of an Irish solo artist, that doesn’t mean One Direction is Irish music.”

So whether you’re an expat looking to hear what’s happening in the music scene at home, or a talent scout looking for Irish ones to watch, or a radio station head of music looking for new songs to add to your playlist, PlayIrish is there for you to dip into, and not something to be shoved down your throat, says Troy.

“We just want people to discover it. There’s a lot of talk and noise on the radio these days. If people want to get away from the world, tune in to PlayIrish and listen to great Irish music for half an hour, that would be a good start.”