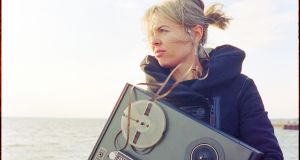 Nicole Lizée: clearly a woman with a fascination for film

The festival season starts in earnest every year in the run-up to the May bank holiday weekend. And all the major musical festivals have divulged details of their 2019 offerings.

Here in Ireland we have, collectively, a rather two-faced attitude to the arts. On the one hand we claim to nurture our artists while at the same time being at the bottom of the European table when it comes to per-capita allocation of public funding for the arts. We are celebrated for our great writers. We have in Aosdána a scheme that, through its Cnuas bursary, is a matter of wonder to artists and cultural administrators in other countries. What more could you want?

Well, more money per capita would be a great start. As would serious local government funding for the arts. As would an upgrading of art and music in our public school system. I won’t go on.

So, given that the arts are relatively neglected in the world of public funding, I thought it would be interesting to look at some upcoming music festivals and see how some of the neglected areas of music feature in their output.

The Sligo International Chamber Music Festival runs for four days (Friday, May 3rd to Monday, May 6th) at St Columba’s Church, Drumcliff, and the Model Arts Centre in Sligo town. The festival, which features the Vogler String Quartet and guests, presents eight concerts and includes one new work, Nick Roth’s Second Quintet for accordion (Dermot Dunne and the Voglers), with one other living composer represented, through Arvo Pärt’s Es sang vor langen Jahren. No other Irish composers feature, nor is there any work by a woman.

The West Wicklow Festival presents six concerts over five days (Wednesday, May 15th to Sunday, May 19th) in Russborough House and at St Mary’s Church, Blessington. The festival’s founder and artistic director, pianist Fiachra Garvey, is obviously tuned in to the neglected areas I’m focusing on.

West Wicklow has a new work for solo piano by Sam Perkin, which Garvey himself will play in the opening concert. The other Irish composers represented are Rhona Clarke, Rhoda Coghill and Joan Trimble. Clarke is the only other living composer, but the list of female composers also includes Clara Schumann, Amy Beach, Lily Boulanger and Lilly Vadaneaux. This is a radical turnaround from the first festival in 2017, where no living or female composers were featured, and the only Irish element came through arrangements by Herbert Hughes.

Sam Perkin features again in the Killaloe Chamber Music Festival (Thursday, May 30th to Sunday, June 2nd) in St Flannan’s Cathedral on the banks of the Shannon. His new work, The Copy and The Original, was commissioned by the festival and is for an unusual pairing, baroque violin (Claire Duff) and modern violin (Diane Daly). No other work by an Irish composer or a living composer is included, and there is nothing by a female composer.

The festival’s artistic director, Ciara Higgins, was quick in her response to the movement that is now Sounding the Feminists, and in her role at the Royal Irish Academy of Music has run day-long celebrations of women in music under the banner Saluting the Feminists.

She has also long been a loyal supporter of pianist John O’Conor, a former director of the RIAM. And the three concerts of the festival’s Dublin Musical Saunter on Sunday 16th have, in the gushing words of the festival brochure, “been constructed to celebrate John’s prowess as both a celebrated performer and a teacher sans pareil, always encouraging and championing his students to achieve their full potential.”

The Saunter includes 10 works by women, nine works by living composers, and seven works by Irish composers. A curious way to celebrate O’Conor’s achievements. The repertoire lists on his website include just a single Irish composer, John Field, and no living composers and no women. Indeed, he has not put himself forward as an advocate of the long list of pieces he has commissioned from Irish composers as test pieces for the Dublin International Piano Competition, of which he has been artistic director since 1988. Perhaps Higgins’s inclusiveness is intended as a counterpoint to O’Conor’s aloofness when it comes to performing works by living, Irish or female composers.

I would like to have included the Cork International Choral Festival in these calculations, but there is so little specific information about repertoire on the festival’s website that this was not possible.

And the Drogheda Arts Festival, though not primarily about music, checks the boxes for both living and female composers on Saturday, May 4th. That’s when St Peter’s Church of Ireland will witness the premiere of Canadian composer Nicole Lizée’s Spielberg Études by fellow Canadian pianist Megumi Masaki. The programme also includes Lizée’s Hitchock Études and Kubrick Études. Clearly a woman with a fascination for film.

Taken Down: Everybody here had blood on their hands
7