The line-up for Electric Picnic 2018 has been announced, with Kendrick Lamar, Massive Attack and NERD among the big names set to perform at Stradbally this year. Video: Ronan McGreevy 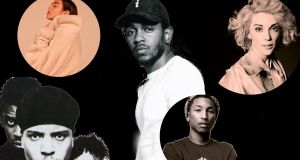 The lineup for the three-day event, which takes place from August 31st to September 2nd in Stradbally, Co Laois, was announced on Thursday morning in Dublin.

Kendrick Lamar will take to the Electric Picnic stage in the wake of the phenomenal success of his most recent album Damn, as well as the soundtrack for the superhero film Black Panther.

St Vincent, AKA Annie Clark, returns to Ireland and the EP stage following the release last October of her album Masseduction, a record largely themed around power, or, as she has said: “all the themes that can swallow you whole”.

N.E.RD, comprised of Grammy Award winner Pharell Williams, Chad Hugo and producer Shae Haley, will play the festival following the release of their first album in seven years: No One Ever Really Dies.

After a year of sold out shows and hit singles, Dua Lipa ended 2017 as the most-streamed British female artist on Spotify, having sold 8.5 million singles and 1.5 million albums worldwide. She also picked up four Brit awards, includiong best solo female and best album.

English performer King Krule, AKA Archy Marshall, will play the festival after the release last October of his second album The Ooz which followed on from his 2013 critically acclaimed debut album 6 Feet Beneath the Moon.

Festival promoter Melvin Benn said he had sold 30,000 of the 52,000 capacity venue before the line-up was announced and the rest of the tickets will go on sale on Saturday.

With numbers like that Benn might have been tempted to put a couple of local pub bands from Stradbally on as headliners and the Electric Picnic would still stand a good chance of selling out.

“It wasn’t what we would do anyway. No festival is immune to line-ups,” he countered. “We want to present what we would consider an incredibly important and relevant line-up every single year, but the line-up is not the be-all of the festival.”

The Electric Picnic has benefited from the improving economy since it reached a nadir of just 22,000 people who turned up in 2012. It has been gaining in capacity and in popularity since then. Benn said he had given a commitment to locals in Stradbally not to increase the capacity of the festival any further.

He suggested that he had secured in rapper Kendrick Lamar “the biggest superstar on the planet without question” as the headliner for the first night of the festival.

“The songs, the lyrics, the show for all those who say him in the 3Arena [on February 7th) – dear God it was so good”.

He was effusive too about Saturday’s headliners. Massive Attack, who will appeal to an older age group. “They are one of my all-time favourite bands, everything they do is made for the Electric Picnic. The rest of the line-up just adds and adds.”

The pop-dominated line-up with hardly a guitar band in evidence is indicative of the retreat of rock from the mainstream music scene. Benn says the line-up reflects the zeitgeist.

“There is a lot of pop around and we want to reflect that fact. It certainly doesn’t dominate the bill, but it is reflective of what is going on at the moment.”

Perennial favourites, such as the Body and Soul area, the Theatre of Food and the Spoken Word tent, all return. A stage with a Berlin-based theme will be added to the festival. It has yet to be named.

There are a number of high-profile female performers including Dua Lipa, St Vincent and Sigrid, the teenage Norwegian singer who is getting a lot of positive notices, but Benn concedes the line-up is male dominated.

“If you take 2017, of the top 600 songs in the Billboard charts, 83 per cent were men. As festival promoters, we reflect what people are listening to,” said Benn.

His company Festival Republic, has launched a ReBalance programme based in Leeds to give more female artists a chance in the music industry.

“It is always going to have that imbalance until we have more women recording music,” he said.

“At that point that balance will start to change. The ReBalance programme is about putting women into the studio to record music to give them on that platform.”