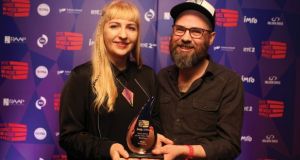 Ships with the Choice Music Prize for Irish Album of the Year. Photograph: Graham Keogh

Much like the recent Oscars, this year’s Choice Music Prize ceremony was a curious mix of surprising and predictable. It was brave of the judges to give the Irish album of the award to melancholy electro duo Ships, one of the lesser known acts on the shortlist.

While Sorca McGrath and Simon Cullen have received a degree of acclaim with their winning record, Precession, it is hardly a popular sensation and this will be the first many casual music fans have heard of the LP, or indeed, the his ’n hers partnership responsible for it.

That is on balance a good thing as it fulfils one of the original remits of the Choice: to turn a spotlight on Irish artists who might otherwise languished. On the other hand, Precession isn’t exactly brimming with potential hits and anyone drawn to it on the back of the Choice could be forgiven for initially feeling a little underwhelmed (don’t worry, it will pass).

The victory was undoubtedly hard-won with McGrath and Cullen seeing off one of the strongest Choice shortlists in years. Given the modest scale of the Irish music scene, Choice lists are invariably divided between musicians deserving of their inclusion and those making up the numbers.

This year, by contrast, nearly everyone merited their place. James Vincent McMorrow, Fionn Regan and David Kitt (via his New Jackson project) were back with some of their best albums yet and Talos and Marlene Enright were represented by debuts of astonishing poise and ambition.

Ships’ music, it should be acknowledged, isn’t especially original, their foggy sad-pop part of a continuum that goes back as far as Goldfrapp and even Portishead. But Precision impressively weaves new patterns from old rope. The record is by turns twinkling and mysterious and if you’ve slapped it on this morning out of curiosity, you are advised to hold tight. Half a dozen listens and the spell will be cast.

The project comes with a heartening backstory too. Precession was a labour of passion for the couple, largely recorded in their rented suburban Dublin house and released only after a last minute crowd-funding campaign raised a crucial €6,000. Sleek and futuristic on the surface, underneath the album is knitted together from old fashioned sweat and tears.

Still, if the win is deserved, a suspicion nonetheless lingers that Choice has once again opted for a slightly underwhelming candidate. Last year, the judges broke with convention in plumbing for the most exciting, compelling and outrageous hopefuls on the list in Limerick rap trio Rusangano Family.

Awarding the prize to a multicultural hip hop trio captured the imagination and felt significant in a way that went beyond the quality of their victorious LP.

An opportunity to make a similar statement arguably presented itself this year. Giving the gong to Marlene Enright would have been a powerful gesture on International Women’s Day (though Ships are obviously male/female act). Similarly a win for trad ensemble Lankum, a group that wears their antiestablishment politics on their sleeves, would have tacitly acknowledged the social changes Ireland faces in this year in Brexit and the abortion referendum.

Instead the gong went to a worthy-yet-not-quite spectacular synth duo who sound a bit like a mixed-gender Pet Shop Boys if they were slightly depressed. Musically, that’s an entirely valid decision. However, if the Choice aspires to be more than merely an industry backslapping session it might look to artists whose music speaks to the Ireland we are living in rather than those chasing their own specific, and obscure, vision.

The ceremony was hosted by human marmite jar Eoghan McDermott. The 2FM personality’s presenting style can be divisive and where some might see earnestness and good intentions others may discern infuriating chipperness. He set the tone early with comments about International Women’s Day and later made what might be considered a surprise reference to the recent death of popular author Emma Hannigan.

His anecdote concerning the Cork roots of RTÉ director general Dee Forbes meanwhile referenced “Cork FC” (which doesn’t exist) and ended with McDermott proclaiming “Up the Banner,” the battle cry of the Co Clare GAA team.

Still, his hair looked marvellous and he asked for the house lights to be turned up so that he could acknowledge two ravers up to the front who had jumped to their feet during David Kitt’s banging New Jackson set.

It was probably enough to merit giving him the job again next year.

‘Ten of the best books set in Ireland’: Does the Guardian get it right?
7