Michael D Higgins: musician ‘will be remembered for his performances and recordings’ 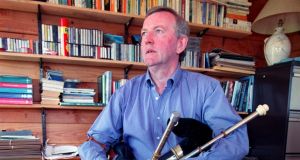 President Michael D Higgins has paid tribute to master uilleann piper Liam O’Flynn who has died at the age of 72 having endured a long illness.

He was born into a a musical family in Co Kildare and formed the influential traditional group Planxty in 1972 with Christy Moore, Andy Irvine and Donal Lunny. After the band broke up, in the mid-1980s, O’Flynn worked with Kate Bush, Emmylou Harris and Mark Knopfler, among others, as well as working with the poet Seamus Heaney and with the composer Shaun Davey on The Brendan Voyage.

President Higgins said people all over Ireland, and further afield, will have heard with sadness of O’Flynn’s death as he was a renowned musician and uilleann pipes player.

“He leaves an important and lasting legacy, through his music, but also through his generous, uplifting and committed approach to the role of music in Ireland’s cultural heritage, contributing to composition and performance with orchestras and in film,” said the President.

“As one of the sources of inspiration behind the founding, in 1968, of Na Píobairí Uilleann, Liam Ó Flynn can be credited with having contributed to the revival of the uilleann pipers, and it must to him have been a source of great pride and satisfaction that Unesco, the United Nations’ Educational, Scientific and Cultural Organisation, recently added the uilleann pipes to its register of important and unique cultural heritage symbols.

“Liam Ó Flynn will be remembered for his performances and recordings – many of them on the Claddagh Records label founded by his lifelong friend Garech de Brún – with groups and artists such as Planxty, Seán Ó Ríada, the Chieftains, Shaun Davy, Seamus Heaney and countless others who shared his love for music, in all its wonderful forms.

“As President of Ireland I pay tribute to his work and legacy and offer my deepest sympathies with members of his family, his friends, colleagues and all those who enjoy and support Irish music.”

Head of the Arts Council Sheila Pratschke said: “Liam was a virtuoso piper of international renown who brought uilleann piping and Irish music to the world stage. He played a seminal role in safeguarding and promoting uilleann piping . . . Liam O’Flynn has left behind him an incredible legacy of music through his recordings, his careful support of other musicians and artists and his dedication to transmission of the great heritage of Irish music to future generations.”

Songwriter Phil Coulter described O’Flynn as a “king among pipers and a prince among men”. He said he was “devastated to hear that the great Liam Og Ó Flynn has passed away . . . [He was] a complete musician and a gentle soul”.

‘We are the weirdoes, mister’: Why women love witches
5

Leaders’ debate: For one dramatic moment, the Taoiseach is like a rabbit in headlights
10