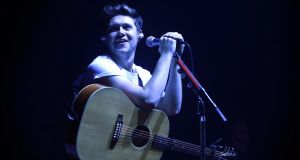 You never forget your first gig and for a lot of people tonight, One Direction star and Mullingar hero Niall Horan’s 3Arena concert is theirs. Parents and chaperones stand away from the crowds, circling their (mostly) pre-teen daughters like protective penguins. The Flicker World Tour will be the spark of a lifelong obsession for live music for many here.

Walking on stage to the strains of She’s on the Loose, wearing the Boss’s uniform of blue jeans and a white T-shirt, Horan has a guitar slung across his shoulder, and the screams from the crowd are as loud as a washing machine on the spin cycle that shows no signs of quietening down. Ever.

The slow set combination of You and Me, This Town and Paper Houses provides a lighter-in-the air moment, except it’s the soft glow of smart phones swaying from side to side that measures the audience’s approval.

Laying down the guitar and moving across the stage, which is covered in granny’s living room rugs, he sits at the piano for Why Did It Take So Long. He admits he’s not as sharp as he’d like to be on the keys but at the rate he’s going, he’ll probably work his way onto the drums for his next tour.

His uniform actually has a purpose other than sheer comfort. A cover of Bruce Springsteen’s Dancing in the Dark works its way into his set, along with Thin Lizzy’s Dancing in the Moonlight, which is warmly received by the chaperones who are finding great joy in the lack of a queue at the strictly over-19s bar.

He plays up to the home crowd, boasting a band of all Irish musicians and bringing on Dublin singer Ruth-Anne Cunningham to duet on his country rock ballad Seeing Blind, which she wrote. “This is what dreams are made of,” he says in a speech we’ve heard many times but always lap up. “We played down in Killarney the other night and they were just as bonkers”.

As support acts go, Julia Michaels is perfection because she is the pop star you want your little sister to look up to. Renowned songwriter to the biggest stars in the world, she performs a medley of Justin Bieber’s Sorry, Selena Gomez’s Bad Liar and Hailee Steinfeld’s Love Myself. It slowly dawns on the crowd that she is responsible for these massive songs.

Having an act like Michaels support Horan was a smart choice, as it shows what girls can grow up to be. They can work magic on stage and behind the scenes.

Although this show is sold out, Horan’s short back catalogue lacks enough uptempo songs to fully fill the set so the Springsteen and Thin Lizzy covers, along with a take on Camila Cabello’s Crying in the Club, are sorely needed.

As this is Horan’s first tour without his 1D comrades, there might be an urge to distance himself from the pop path they paved and to play a more serious role but when he loosens up, he really shines.

For the final encore of the night, Horan becomes more confident in his performance when he airs out One Direction’s fully-charged pop rock song Drag Me Down and his saucy, slow-burner of a single, Slow Hands.

With these songs, you catch a glimpse of the performer he could be, rather than one who’s trying to fit the mould of his idols. By the time he returns to the 3Arena on March 29th, he may have already worked that out for himself.