Ed Sheeran at 3Arena: This is pop without the chewing gum snaps and rehab receipts

Sheeran’s audience craves traditional, the comfortable conformity and uniformity of the generic 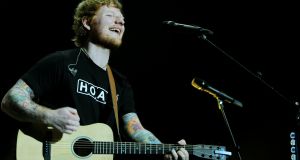 This country has a strange,intense relationship with men brandishing acoustic guitars like a shield of the knight of the realm, protecting them from the frivolity of the fake.

Remember the collective insanity about David Gray, the anointing of Damien Rice? Witness the meteoric rise of the newly blessed Hozier, Irish audiences find such power in authenticity. This is the fuel of Ed Sheeran, this reliance on the real is what connects him to his audience.

The millionaire boy wonder bashfully trips onto the stage of the first night of his sold out Irish shows ruffling his hair, head down, greeting his audience like a shy neighbourhood kid.

What will happen to Ed if he stops keeping it real? Will he succumb to the pleasures of pop?

Bashing into a ferocious version of Castle on the Hill, he stands alone in a t-shirt emblazoned with the word ‘Hoax’, he’s no hoax is Sheeran, in a world of fake news surely he’s a truth telling troubadour- just ask the shirtless young man in the crowd beating his chest with terrifying passion and fury.

Ed is the genuine article, treating even gigs as giant as this like it was an open mic night down the local. He chats about his support acts, urging the crowd to buy their albums, quaintly stating they’re for sale on CD at the merch stands for a tenner. Which is all very sweet but when he says it standing in front of a massive screen that multiplies his own image like a flicker book of thousands of Eds bearing down on the crowd akin to some kind of pop propaganda it sounds a bit silly.

Ed is not struggling at some unsigned event, Ed doesn’t really have girl trouble anymore (apart from choosing a new Victoria Secret model from the catalogue). Ed is still your mate who knows where the party is at but now it’s not bants in a free gaff, it’s sliding onto some oligarch’s yacht.

Which is fine when you’re a pop star who enjoys keeping it fake but what will happen to Ed if he stops keeping it real? Will he succumb to the pleasures of pop?

Hopefully this funtime Ed is a side he’ll embrace for his next album and he won’t get lost like his young fogey counterpart Adele who is trapped mining her limited unhappy past for her fans.

There are glimpses of this would-be ego, flashes of a wolfish popstar beneath the everyman when he bursts into life on the zippy glee of Sing (which sounds like it was created to be bellowed by an Irish crowd) the gap-year goofiness of Barcelona or on the more thoughtful I See Fire where he cheekily mixes in a chorus of Rag n’ Bone Man’s Human. The song glides to a dramatic crescendo with the images of grey skies and mountainsides engulfing him in his own personal Game of Thrones.

Where things take a decidedly more cynical turn is when Ed decides to go romantic. He has relied on this image of himself as the almost put upon pleb, creating hollow anthems for insecure girls that are now in every boyband’s back pocket and are used liberally to charm. When he attempts to woo with the song Perfect (Generation Snapchat’s Wonderful Tonight) as rose petals cascade down the screen, it all feels a bit #HALLMARK, an ersatz version of romance to be packaged up on someone’s Valentine’s playlist without any thought or effort required and it belies the “genuine” image he portrays.

Thinking Out Loud sounds like a love song devised by a think tank or savvy marketing men to be played over a montage in a Richard Curtis film, devoid of emotion, a robot’s wedding song. It’s hard to believe it wasn’t created in a laboratory. Not that it matters to the couples clinging to each other in the crushing crowd. This audience craves traditional, the comfortable conformity and uniformity of the generic. This is rock turned all the way down to six, this is pop without the chewing gum snaps and rehab receipts. It’s a polite cough in the face of Kanye.

When he invites Belfast band Beoga onstage for a trad end to the night’s proceedings the crowd erupts, county colours fly and tricolours are unfurled to the tune of Steve Earle’s Galway Girl before Sheeran bursts into his own updated tribute and a parlour pounding version of Nancy Mulligan - your family favourites repackaged and sold to you a-new. Not a dangerous, confrontational art-pop star like Gaga but rather the reproductions of Warhol’s Campbell soup cans. Ed Sheeran is a brand that promotes the ease of the familiar, the contentment in the homogenised.

As he implores the crowd to “Get home safe” like the thoroughly good guy he purports to be, tricolour draped on his shoulders like an Olympian of the people, it’s hard not to wish for a dose of weirdness to upset the balance of Ed Sheeran - the entirely normal pop star.