He wowed Glastonbury at 16 with his political songs, but the London singer-songwriter says his primary reason for playing music is pure enjoyment 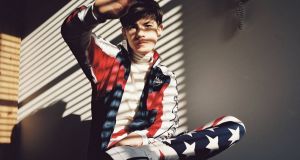 Declan McKenna: “I’ve never seen myself as a strictly political songwriter, but I think in the world that we live in, it’s difficult to avoid certain topics.”

Nonetheless, there’s some weight to the label bestowed on the impish-looking English teenager who this week releases his debut, What Do You Think About the Car?

When he first emerged after winning Glastonbury’s Emerging Talent competition two years ago, aged 16, McKenna was marked out as a politically precocious talent. His breezy debut single, Brazil, written aged 15, tackled corruption in world football and how construction work at the 2014 World Cup displaced local communities.

He followed it up with Paracetamol, inspired by the story of Leelah Alcorn, a US transgender teenager, who killed herself after her parents sent her for Christian conversion therapy. Subsequent singles have examined religious intolerance (Bethlehem); the exclusion of young people from political discourse (The Kids Don’t Wanna Come Home); and police brutality, xenophobia and the right-wing media (Isombard).

All are channelled through bright bursts of melodic indie, indicating a desire to party as much as to preach.

“A lot of the time, artists and musicians can get criticised for being ignorant or silly or not understanding the real world,” McKenna tells me backstage after a performance at the Academy in Dublin. “And I think it’s important to show that a) you care about a lot of things, and b) actually try and get the people who listen to your music to engage in certain issues.”

In person, McKenna’s demeanour can belie what’s going on underneath. When we meet, he is dressed in a grey tracksuit, younger-looking, if at all possible, than his 18 years. That night, he’ll take to the stage for a triumphant, sold-out show in front of a young, fanatical audience singing back every word. There’ll be balloons and confetti dropped on the audience, while by then he’ll have added make-up and lashings of glitter to give off a nonchalant, pop-star look. Out of such jubilant scenes, passersby might assume McKenna to be blase, even cavalier, about the issues he writes about.

“I’ve never seen myself as a strictly political songwriter in a sense, but I think in the world that we live in, and with so much access to the internet and stuff, I think it’s difficult to avoid certain topics,” he says.

“But I think my primary reason for being a musician, or writing songs, is just because I want to enjoy it. I think one of the coolest things that you can do with music is when it sounds a certain way and can be kind of misleading in terms of the lyrical content, like what David Bowie did with Oh You Pretty Things or The Beatles on Maxwell’s Silver Hammer. That the song kind of has this double meaning of conflicting emotions.”

Born in Hertfordshire, just north of London, on Christmas Eve 1998, McKenna is the youngest of six and comes from an Irish background. His grandparents hail from Co Cavan and Co Cork.

“Each summer we’d kind of spend a few days in Ireland as a holiday and just go around all the different family members. We’d go to four different houses and have sandwiches and Sprite all day. There’s a big old McKenna massive in Ireland,” he says.

As a child he played Gaelic football in Enfield, north London, before taking up guitar aged nine. “My dad played guitar, my oldest brother as well. Everyone in my immediate family kind of had something to do with music. It just kind of happened naturally.”

He began writing seriously at 15 before winning the aforementioned competition to play at Glastonbury in 2015. That success triggered a bidding war among record labels before he signed with Sony’s Columbia imprint. The subsequent two years have brought him out of school and on tour, with numerous miles clocked up around Britain, Europe and the US. In between, he recorded What Do You Think About the Car? with producer James Ford (who has worked with Arctic Monkeys, Foals and Haim).

“The songwriting on the album went from 15 to 17, which is not a massive amount of time, but in terms of how much change happened in my life, there was quite a lot,” he says. “Some of the stuff I didn’t write until two weeks before I was recording my last session. And then some of the songs came two or three years before that.”

The difference between the newer and older tracks, he says, is he now has more life experience to draw from beyond “being in school and hanging out at home with not much to do”. Yet it’s clear his earlier, issue-led songs provoked a very personal response, particularly Paracetamol and The Kids Don’t Wanna Come Home.

The latter was written on November 13th, 2015, the night of the Paris attacks. McKenna was performing in the city’s Le Mansart bar as the violence at the Bataclan unfolded. He returned to the UK in the early hours of that morning.

“The day after, I kinda realised that I now felt the emotions that I was trying to put into this song and it all became quite real for me. That kinda fear and frustration but also a longing for change,” he says.

“The Kids Don’t Wanna Come Home is a song about being a young person in the modern world. It’s about wanting to challenge fears and be part of a movement of change, and looking for hope despite a lot of dark and horrible things happening around the world.”

Paracetamol, his second single, was also born out of a dark place. McKenna said he was “deeply affected” after reading an article about transgender teenager Leelah Alcorn and how her parents had forced “conversion therapy” upon her.

“That sort of thing, just being called out and hated for your own identity, I think is something that a lot of people experience at some point in their life, obviously not always to that extent. It’s definitely something that hit me very hard. Paracetamol was already an idea in terms of the melodies. I guess once I’d read that story, I was straight in. I’d come up with this idea about writing a song from a media perspective, starting with something like ‘A boy, 15 . . .’ because that’s how a lot of newspapers will start their articles.”

Of the newer songs, the bouncy Listen to Your Friends is a standout.

“It came out as a kind of statement against a lot of media forcing false political ideas on the public and people. I saw this person on the train reading an article that was basically demonising parents who take their kids on holiday during school term time. The bigger issue there is companies taking advantage of parents at that time of year . . . I guess the actual problem is ignored and one that is less significant is used to cover it up.”

With his burgeoning success, how does he stay grounded?

“Your interpretation of yourself and what you’re doing is the most important thing,” he says. “And that’s how you stay on a certain level. You just accept that some people are going to really, really love what you do, but you just got to keep working the same way and not change that. That’s how I feel about myself.

“I just try and stay on a plan of ‘this is what I do’ and I don’t worry about if people love it or hate it. That’s just how I myself avoid getting sucked into it.”

What Do You Think About The Car? is released through Sony Columbia on July 21st. Declan McKenna plays Electric Picnic, Stradbally, Co Laois, September 1st-3rd

Malachy McCourt: ‘Frank wouldn’t be happy unless he was miserable’
Real news has value SUBSCRIBE