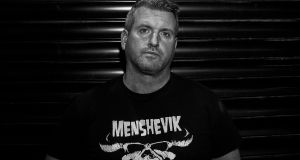 Oran O’Beirne: “I feel very fortunate that my life is involved in music which is what I wanted.” 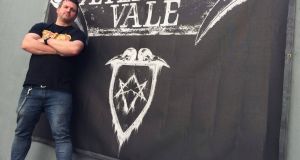 For some, music is just in their blood and it’s all they ever wanted to be close to. Oran O’Beirne’s life-long affinity with music started in Scariff, Co Clare, where his father put on folk acts in the the Merryman Tavern in the 1960s. It continued when he came of age London working in management with UK indie bands of the 1990s. When he moved to San Francisco, DJing kept the music fires burning.

Finding himself back in Dublin in 2001 with no job prospects in the music industry on offer, O’Beirne and friend Gavin Duffy saw a gap in the market and started Overdrive, a branding company that provides musicians with custom drum skins, fire-certified backdrops, guitar and bass amp scrims – the kinds of things that you see on every stage but are never sure who makes them.

O’Beirne always wanted to do something with art and music and Overdrive fulfils that need (they also do album covers, logos, flyers, electronic press kits and PR for artists as required). Those are the little touches on stage or online that help a band look more professional.

“A lot of musicians kind of think they can’t afford this stuff,” he says. “It looks very sort of ostentatious when you walk into a show and you see a band on stage and they have this big backdrop and they have the custom drums and scrims but it’s all about identity but it’s very, very doable and very affordable.”

Overdrive’s clients include Gavin James whose backdrop needs have obviously moved up from his early days.

He went from getting a very small little backdrop for him doing clubs to something a bit bigger. Then came the 3Arena stadium-sized one.

While Overdrive keeps things ticking over on the business side, O’Beirne has developed another side to the company, by accident almost, that is more of a passion project.

When he started overdrive.ie as a music branding company, it also gave him the opportunity to start a blog to write about his favourite genre – metal. It soon took off and O’Beirne was being offered interviews with the giants of the genre – Iron Maiden and Megadeth among them.

“That sort of just took over everything else. We just kept getting more traction and more hits on the website and establishing ourselves.”

O’Beirne used the traction to develop a new strand of support for metal and hard rock acts in Ireland. He took over the Irish franchise for Bloodstock, the 25,000-capacity independent UK heavy metal festival, and helps bring Irish metal bands to the UK festival through showcases locally that the bookers attend. Next month, Irish bands Na Cruithne and Zhora will join the likes of Megadeth at Catton Park in Walton on Trent.

O’Beirne got involved in part because being entrenched in the metal scene in Ireland, he saw what little opportunity the bands here have beyond playing Dublin venues like Fibber’s, Voodoo Lounge or Gypsy Rose. Metal doesn’t get a look in in media or radio terms on this small island, where the UK has a larger active and supported scene.

O’Beirne points to Daniel P Carter’s three-hour weekly metal show on Sundays on BBC Radio 1 as an example but suggests that metal’s identity and lyrical content have always been too offensive or challenging for the mainstream.

“It comes straight down to the point that in the eyes of a lot of people it’s offensive. The lyrics to the music don’t talk about love or happy days. It talks about misery and death and politics and nuclear war and suicide and the real stuff that’s happening in life you know as well as love. It talks about stuff you can’t talk about.”

O’Beirne points to Download Festival, the 80,000-capacity metal and hard rock festival which has been running since 2003, the amount of festivals in Germany and mainland Europe and that a legacy act like Iron Maiden sold out their 3Arena show with minimum fuss.

“There’s there’s a huge market for it,” O’Beirn states. “A lot of people attend these events and there’s huge amount of money generated by the people who are putting these festivals on.”

O’Beirne is clearly passionate about metal and music in general (he still DJs regularly in Sin É in Dublin). With Overdrive doing so well on its own, the physical branding aspect of the business will move to MainstageDesign.ie so there’s more separation. O’Beirne wouldn’t want to be involved in any other business than the music biz.

“I feel very fortunate that my life is involved in music which is what I wanted. And even though there’s terrible days and things don’t work out, it’s just really nice to be involved in something that I’ve just been passionate about all my life.”