RTÉ ConTempo Quartet play in Sligo and Galway. Plus: ‘Banished’ in Kilmainham Gaol 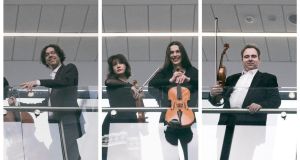 RTÉ CONTEMPO QUARTET
The Model, Sligo 3pm €20/€10/€5 con-brio.org
Luisa McConville’s Con Brio Sligo Music Series is celebrating its 20th anniversary. It’s interesting that it was a Wagner-loving Englishman, Francis Humphrys, who set up the West Cork Chamber Music Festival, and an opera-loving Italian who set up a chamber music series in Sligo. The first concert of 2019 sees the RTÉ ConTempo Quartet playing works by Haydn (his incomplete Op 103), Irish-American Swan Hennessy (the Third Quartet by this Paris-resident composer who was obsessed with all things Celtic), Brahms (the elusive Quartet in A minor, Op 51 No 2) and Ian Wilson, who had a long association with the series when he lived in Co Leitrim (his new Rossiniana, specially written for the indefatigable McConville, gets its first performance at the concert). Later anniversary events bring concerts from pianist Barry Douglas (Friday February 1st) and the Carducci Quartet with clarinettist Julian Bliss (Friday March 22nd).

BANISHED
Kilmainham Gaol, Dublin 7.30pm €25/€18 riam.ie
also Wed, Fri, Sat 19th, same venue; preview on Sun 13th €18/€15
Belfast-born, London-based composer Stephen McNeff has a rising profile in Ireland. He featured in the 2007 World Association for Symphony Bands and Ensembles conference, which was held in Killarney. And his choral work A Half Darkness, to words by Aoife Mannix, was co-commissioned by the Cork International Choral Festival and Chamber Choir Ireland for the 2016 commemoration of the Easter Rising. The Royal Irish Academy of Music is now presenting the Irish premiere of his 2016 opera, Banished, in the highly atmospheric setting of Kilmainham Gaol. Banished is an adaptation of Steve Gooch’s play Female Transport (librettist Olivia Fuchs worked with Gooch on the adaptation) and deals with a group of female convicts sailing to the penal colonies in Australia. Opera magazine called the work “a buoyant, female cross” between Britten’s Billy Budd and Janacek’s From the House of the Dead. The RIAM production is directed by Caitríona McLaughlin, conducted by Andrew Synnott, and designed by students from IADT.

SWANSONG
Town Hall Theatre, Galway, until Sunday musicforgalway.ie
Music for Galway’s Midwinter Festival, this year entitled Swansong, concentrates on works written towards the end of a composer’s life. Given how young some composers were when they died and how long others lived, the choice is pretty wide. Galway’s offerings include the Vier letzte Lieder completed by the 84-year-old Richard Strauss in 1948, the String Quartet, Op 121, written by Fauré at the age of 79, the Piano Trio Fanny Mendelssohn wrote in 1846, the year before her death at the age of 41, some songs Mozart wrote aged 34, and Schubert’s Der Hirt auf dem Felsen, written at 31. There’s also a new string quartet from 86-year-old John Kinsella, his Fifth, and a talk on late Schumann and Fauré by Richard Wigmore. Music for Galway’s artistic director, Finghin Collins, shares the duties at the piano with Leon McCawley. The ConTempo Quartet play both collectively and individually, and the other guests include soprano Ailish Tynan, baritone Henk Neven and clarinettist Michael Collins.