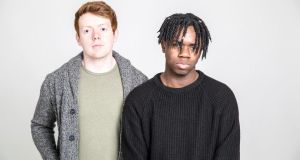 What: Alternative indie-hip-hop pop
Where: Kildare
Why: Matt O’Baoill and Max Zanga are two young Maynooth boys who have been building a fine head of steam in Irish music under the umbrella of the Word Up Collective over the last couple of years with influences derived from the zeitgeist intersection between trap, R&B and DIY pop.

The duality between the duo’s styles is the catalyst to their sound. Max Zanga is the rapper, capable of rhyming over dance rhythms, summer jams and acoustic pop. Matt O’Baoill is his melodic foil, providing earworm hooks and heart-on-sleeve choruses.

The contrast between the two performers is Tebi Rex’s DNA double helix. Listen to the club-hop of Black Enough, with Zanga’s club-hop rap matched with O’Baoill’s chorus and it’s not hard to imagine it taking over a summer at the Gaeltacht.

At times, their songs are bright and breezy, full of sounds that encapsulate teen romance and figuring out your place in the world. At other times, there’s an undercurrent of melancholy and frustration, born of the same young experience.

Songs like Men Are Trash is an amalgamation of hip-hop low-end, tropical steel drum sounds and the fabric of modern pop that play off that push and pull of the duo.

There’s a sense that their best music is ahead of them and plus points must be awarded for their openness to collaborate so early in their career.

You may have heard their rock/rap collaboration with The Blizzards I Need A Win, She Hated Love Songs II featuring folk-band Elkin or First Impressions with rising Donegal folk artist Eve Belle.

The actor and daughter of Serge has fashioned a fine side career in music over the last couple of years and was first out of the blocks with a new EP called Take 2.

A highlight of the release is the Bombs Away, a Sebastian-produced slice of lounging disco pop with Gainsbourg whisper singing about coping with living in a time of European turmoil.

“The times I tried to get away from it all / Just left me standing with my back to the wall,” she deduces.

You have to watch this

A film by Arbutus Yarns and Islander – Backwards To Go Forwards

Filmmaker Myles O’Reilly has consistently put out thoughtful and creatively-driven music documentaries and live sessions at a time when music video television has hit its nadir.

For his latest foray, in collaboration with Cork promoter Islander, O’Reilly shines a light on Ireland’s most exciting trad and folk musicians by interviewing and capturing performances from Ye Vagabonds, This Is How We Fly, Zoe Conway and John McIntyre, Cormac Begley, Saileog and Muireann Ni Cheannabhain, Slow Moving Clouds, and Radie Peat.