The sound of young Ireland: the bands and singers to watch for

Keep an ear out for Thumper, Cherym, David Keenan, Roisin Carney and Lemoncello 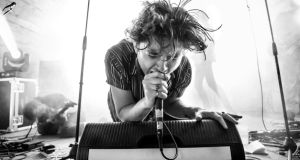 Dublin band Thumper “have spent the past few years honing the kind of granite-hard rock that requires earplugs”.

You could add 20 names to the ones listed below and still fall short of the number of Irish music acts that will, in some shape or form, emerge this year as bona-fide contenders. We have chosen not to present box-fresh ‘hotly-tipped’ newbies (many of which burn brightly only to disappear) but rather music acts that we think have something substantial to offer and will become bigger and better in 2019.

Not a new name by any means, but like Fontaines DC before them, Dublin’s Thumper have spent the past few years honing the kind of granite-hard rock that requires earplugs. Unusually for most rock bands, Thumper have four guitarists stage front, creating a sonic thrust impossible to ignore. Songs released over the past 18 months – and that augurs well for their forthcoming album – include The Loser, AFL, and (You’re Bringing Me) Down, the latter pair produced by Girl Band’s Dan Fox. While the records hum like (as Thumper themselves say) “sonic death via bubblegum pop”, this is one band you have to see live to fully appreciate just how terrific they are: a purified dynamic witnessed all too rarely marks their cards. Listen/watch: bit.ly/2QQwPCN

Killarney singer and songwriter Ronan Kealy doesn’t belong to your standard perception of what we mean by ‘singer-songwriter’. Rather, in the same way that Cavan’s Lisa O’Neill and Louth’s Jinx Lennon deliver missives from Border counties, Kealy fuses southern perspectives with an equally keen ear for local dialect, colloquial language, and humour (hence, perhaps, the title of his second EP, F*** Off I Love You). There is a growing sense, too, that an audience has already discovered his songs – notably Hungover at Mass, and The Back of Her. The former is well on the way to becoming a favoured gig anthem, while the latter delves into more complex emotional issues that are purged for all concerned when sung along to in a loud voice. Listen/watch: bit.ly/2Q6HR1q

After being together for three years, Dundalk’s Just Mustard released one of the most underrated debut albums of 2018, which has now been shortlisted for this year's Choice Music prize. Despite its lengthy gestation, Wednesday – released physically only on vinyl by local label Pizza Pizza Records – was recorded with little production fuss, in an approach at odds with bands that yearn for perfection, especially those that have been around so long. Wednesday is full of combinations that, in the wrong hands, would be little more than a mishmash of influences: electronic, lo-fi, post-punk, krautrock, keening vocals, guitar-shredding shoegaze. Taken as a co-ordinated whole, the music borders on the mesmerising and uncompromising, and as such works much better in a live setting where volume adds to the experience. Listen/watch: bit.ly/2LBVSDH

That geography plays an important part in the creation of music is a given – just think of how Icelandic music might sound like if there were no extremes of weather or skyline. As a child, Rosie Carney moved from the south of England to the northwest coast of Ireland, close to Donegal, and was immediately struck by how picturesque and jagged the scenery was. Having then just started to play the piano – still her primary instrument – Carney’s initial musical sketches were purely instrumental, but she has since substantially broadened her remit. After a skirmish at the age of 16 with a major label (cue a fraught two years that ended with her being dropped without anything having been released), Carney took stock of her life, both emotionally and creatively. Now in her early 20s, she has used such experiences to create some of the most gorgeous, bereft songs you’ll hear this year. Her debut album, Bare, will be released on January 25th. Listen/watch: bit.ly/2Q5iltm

Flipping the bird to all-male punk bands, Derry’s Cherym set the rugged tone last year with releases such as Pretty Boys, Take it Back and Too Many People. Aware that Derry has had an enviable reputation in providing classy punk/pop from the mid-1970s until right now – from the Undertones to Touts – the trio (guitarist Hannah Richardson, bassist Nyree Porter, drummer Lauren Kelly; all share vocals), clearly aim to add themselves to the list. A new single, Super Queens, is released at the end of this month. Listen/watch: bit.ly/2AhEUWG

A sense of humour is crucial if you want to offset the anxiety of imminent school exams and making serious inroads to creating a name for yourself. While their Twitter bio states that Limerick’s PowPig are “a 14-piece boy band from Sligo”, they are, in fact, four teenagers (Anna Marie Rooney, Andrea Mocanu, Laura Drennan and Leah O’Donnell) who spent most of last year making the right kind of noises with EPs such as Buzz Buzz. We saw them play the IMRO Other Room at Other Voices in Dingle last December, and while there is still a lingering naivete to their live performances, their songs to date are the stuff of success stories. So far, so lo-fi, but this year will surely see the quartet develop apace with a guitar band scene that is strengthening as each month passes. Listen/watch: bit.ly/2s6kR9z

Dundalk’s David Keenan has had the most amazing 12 months, wherein his early promise – he emerged in 2015, when a video of him singing an original song, El Paso, in a Dundalk taxi, went viral – blossomed into fully developed songcraft and stage persona. Back then, the former Louth VEC student had a military haircut and thrift-shop demeanour, but he now cuts quite the Byronesque figure that hints at Jeff Buckley jamming with Glen Hansard – a Big Music vibe that aims to transcend certain limitations. His live performances are where Keenan is at his most absorbing, something that was highlighted most dramatically during Other Voices at St James’s Church in Dingle last December. In one of the most precariously poised gigs this writer has seen in some years – the kind where sheer audacity can either fall flat on its face or reach for the stars, depending on the brazenness of the performer – Keenan’s nerve held still. In March, Keenan will travel to Austin, Texas, for the SXSW (South by Southwest) industry showcase festival. There’ll be no stopping him after that. Listen/watch: bit.ly/2BHcBRJ

As if to prove that we are not all about wilful noise or oddities or music that many people might not easily get into, spare a thought for Lemoncello. Formed while students at Maynooth University, Laura Quirke (vocals, guitar) and Claire Kinsella (vocals, cello) have been the calmest of unruffled musicians for the past year or so. They released their debut EP, Stuck Upon the Staircase, in April of last year, subsequently plugging it by performing in small venues. This looks set to change in 2019, however, and not just through their collaborative interchanges on stage and record with the likes of David Keenan and Junior Brother. You would be right in thinking that Lemoncello’s mix of acoustic guitar, cello and harmonies results in serene but robust music – Quirke and Kinsella create baroque folk good for the head and the heart. A second EP is scheduled for release before April. Listen/watch: bit.ly/2QSyAQ6

It’s all about keeping yourself on your toes for Diolmhain Ingram Roche, aka Wastefellow, the Dublin producer who has continually whetted the appetite for what he’s going to come up with next. His live shows have fused A/V with performance and an ever-ready (and changing) approach to working with hip-hop, dance, grime, dub, electronic, house, and a vocal delivery that traces a line from Thom Yorke to Jeff Buckley. Last year’s superb EP, Post Human Potential, hints at further unpredictable music explorations – the first of which is a new, as yet untitled, single set for release in February. Listen/watch: bit.ly/2SnqUlw