Stories from the She Punks: this week’s rock and pop highlights

Women in rock doc features The Raincoats, The Chefs, the Au Pairs and The Slits 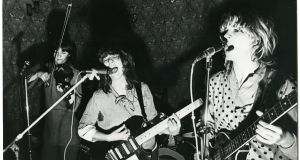 The Raincoats can be seen on screen at Black Box, Belfast on Saturday

THE BIG GIG
Tramline, Dublin 8pm €12 firstfortnight.ie
One of the major sections of the First Fortnight Festival is the “Big Gig”, which always pulls a few rabbits out of the magician’s hat. This year’s outing is no exception, as it features three solid-gold Irish acts aiming to make 2019 bigger and better for themselves: singer-songwriter Molly Sterling, indie-folk group Brave Giant and songwriter/performer Paddy Hanna (whose 2018 album, Frankly, I Mutate, has raised his profile skywards). TCL

SHE PUNKS
Black Box (Green Room), Belfast 7.15pm £5 cqaf.com
Running for the next few weeks, Belfast’s Out to Lunch Festival provides real cultural shelter and comfort for the cold January weeks ahead. One of the many highlights is the screening of Stories from the She Punks, a documentary that looks at the participation of women in UK punk bands from the mid-late ’70s onwards. Co-directors Gina Birch and Helen Reddington know their stuff – they were once members of, respectively, The Raincoats and The Chefs – and reflect on what it was like for those involved. As well as rare archive footage, the documentary features interviews with the likes of Gaye Black (The Adverts), Shanne Bradley (The Nips), Jane Munro (Au Pairs), and Palmolive (The Slits). Following the screening, Birch and Reddington will take part in a public Q&A. TCL

2MANYDJS
District 8, Dublin €16.64-€27.73 district8dublin.com
Well, they’re still going. Belgian brothers Steven and David Dewaele might be better known as Soulwax, but they have also been working under the name of 2ManyDJs since approximately 2007. Mixing and mashing any song under the sun that gets people moving, they’re one of best live acts to go see if dancing is your favourite activity and you’ve no genre snobbery to behold. Some of their latest sets feature Chemical Brothers, Donna Summer, Riton featuring Kah-Lo, MGMT and Technotronic. In the drudge of winter, this gig might be the quick fix to the January blues you so badly need. Doors are from 11pm until late. LB

UTOPIA with DMX KREW
Yamamori Tengu, Dublin €10-€12 yamamori.ie/tengu
It’s been five years since Edward Upton – aka British acid and electro DJ DMX Krew – played in Dublin, but he plans on making up for that absence. Dublin DJ Vlad is first up on the line-up and Adam McCrorie and Billy Iland will take over for a back-to-back set before DMX Krew hits the decks. In an unusual twist, there’s a no-phone policy here so you can dance like no one is watching. Or, even better, dance like no one is recording and sneakily uploading it to Instagram. LB

JC STEWART
Whelan’s Upstairs Dublin 8pm €11.75 (sold out) whelanslive.com
County Derry-born songwriter JC Stewart has long since earned his stripes by toiling in the undergrowth of the Northern Irish music scene. From covers bands to original bands to supporting acts, Stewart has worked his tail off. Such labour has paid off, as crucial support slots to Kodaline, Snow Patrol, and Lewis Capaldi have upped the game somewhat. His music channels the radio-friendly soul/pop styles of James Bay and our own Hozier, so expect bigger venues than this one for his next few shows, as feedback and buzz increases. TCL

AMPLIFY HER
The Sugar Club, Dublin €12.50 thesugarclub.com
This event is celebrating all aspects of women in electronic music. Doors open at 6pm and there will be a CDJ and Vinyl workshop hosted by the deadly Gash Collective. The Dublin premiere of Amplify Her, the film documentary that captures the rise of women in this music scene, will start at 8pm and it will be followed by a panel discussion featuring Blondtron, AppleCat and Lux Moderna. All Proceeds from tickets sales will be donated to Gash Collective, the Irish-based platform that focuses on supporting female identifying and LGBTQ+ producers and DJs in electronic music. LB

MASTODON
Ulster Hall, Belfast 7pm £33 ulsterhall.co.uk;
also Tuesday January 15th Olympia Theatre Dublin 7pm €36.50 ticketmaster.ie
Not many heavy metal bands have released a concept album based on Herman Melville’s 1851 novel Moby-Dick, but we wouldn’t put anything past Atlanta, Georgia’s Mastodon. They have been around for almost two decades, yet it is only in the past several years that they have wandered into the wider spaces of commercial familiarity. Grammy nominations and some hits on the Billboard Mainstream Rock Songs chart have broadened their reach, making them, says Rolling Stone, “the most important new band in metal”. Special guests on both nights are Mutoid Man and Kvelertak. TCL

NEIL and LIAM FINN
Olympia Theatre, Dublin 7pm €39.50 ticketmaster.ie
It is very rare that a father and son singer and songwriter blend works together successfully on stage and record, but Neil Finn – all the way from New Zealand via Kilmallock, Co Limerick, the birthplace of his mother – and his son Liam appear to have bridged the divide. While Finn Sr has, of course, a pop/rock pedigree that goes all the way back to Split Enz and Crowded House, Finn Jr has also made his presence felt as a songwriter with a string of well-received solo albums. The duo’s debut album, Lightsleeper, released last August, introduced a potentially sustainable side project for both. Expect a mix of respective solo work with a few Crowded House tunes thrown in to make people really happy. Special guest is power-pop practitioner Thomas Walsh aka Pugwash. TCL

ADRIANNE LENKER
Button Factory, Dublin 7.30pm €16.50 buttonfactory.ie
Now approaching her 30s, US singer Adrianne Lenker is almost a veteran – she has been releasing music since her teens, but it was her 2014 album Hours Were the Birds and last year’s Abysskiss that have caused her profile to rise beyond average levels. Taking time out of her touring schedule with her band, Big Thief, Lenker shows a different side to her in these solo shows, a style that is more intimate folk than indie rock. Whatever the perspective, if you’re looking for some kind of enlightenment in the form of a well-delivered folk song, then Lenker is your immediate point of contact. TCL

ONES TO WATCH
Whelan’s, Dublin 7.45pm €10/€5 whelanslive.com
also Thursday/Friday/Saturday/Sunday, same venue
Dublin-based Hard Working Class Heroes may be the showcase Irish festival visited by UK, European and US music bookers, but Ones to Watch – the ninth iteration of this venue’s display of emerging Irish talent – is catching up. Across five days and three stages, more than 60 music acts will be barking for your attention. You have never heard of some of them and you will never hear of some of them again, but if you have even the slightest interest in what Irish music you’ll be listening to in 2019, then get thee hence to Whelan’s. Our picks include Bi Curious, Lowli, and Somebody’s Child. TCL

STEFAN MURPHY
Kasbah Social Club, Limerick 9pm €10 dolans.ie
Dublin’s Stefan Murphy is a wanderer – a songwriter and singer who has been in bands (including Subtonics and The Mighty Stef) yet who is going through a rich period of solo work as himself. Currently based in Atlanta, Georgia, Murphy has stripped down his material for what he has described as a “brass knuckles” version of what he is best known for. Taking the tough acoustic route sheds new light on his expressive songs, and with just him on stage – telling real-life stories and cracking wry jokes – you can safely bet that you’ll walk away informed, invigorated and enlightened. Murphy also performs at Whelan’s Upstairs, Dublin on Thursday January 24th. TCL

BEAT CLUB with MATHMAN & MANGO DASSLE
The Bernard Shaw, Dublin 8pm Adm Free thebernardshaw.com
Beat Club is a chance for up-and-coming producers and MCs to show off their rhymes and rhythms. With DJ Mathman and his noble sidekick Mango hosting the show, you can witness some acts in their very early stages as they compete in this live showcase without using any beats or tracks. It’s a chance to get to know the beat makers and producers from Ireland’s urban scene. LB

TWIN BANDIT
Grand Social, Dublin 8pm €13 thegrandsocial.ie
Vancouver-based indie-folk singers and songwriters Hannah Walker and Jamie Elliott blend the purity of traditional country (Emmylou Harris is a touchstone) and classic pop (Rumours-era Fleetwood Mac is an obsession) with alternative styles so neat that no less a producer than Daniel Lanois has contacted them. Make a beeline, is our advice. Special guest is Saskatoon-based folk/roots singer-songwriter Steph Cameron, who will be performing tracks from her albums Sad-Eyed Lonesome Lady and Daybreak over Jackson Street. TCL

Sex and the Irish: We were always a law unto ourselves
8