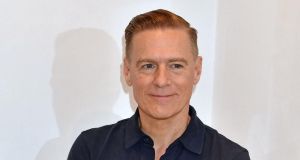 Bryan Adams: the singer had been due to start a three-night residency in London’s Royal Albert Hall this week. Photograph: Tristar Media/Getty

Bryan Adams has made an expletive-filled attack on Chinese people over coronavirus, in the week he was due to start a concert residency at the Royal Albert Hall, London, that was cancelled due to the outbreak.

Introducing an acoustic performance of the song Cuts Like a Knife on his Instagram page, the Canadian singer wrote:

“Tonight was supposed to be the beginning of a tenancy of gigs at the @royalalberthall, but thanks to some fucking bat eating, wet market animal selling, virus making greedy bastards, the whole world is now on hold, not to mention the thousands that have suffered or died from this virus. My message to them other than ‘thanks a fucking lot’ is go vegan.”

Adams’s outburst conflates a number of theories about the origin of the virus. One is that Covid-19 was passed to humans via the eating of bats (or pangolins infected by bats, as has also been suggested). A number of the earliest cases of the disease were found in people who had frequented a wet market in Wuhan, which sells fresh meat and seafood, leading to fears that meat bought there could have been the source.

CUTS LIKE A KNIFE. A song by me. Tonight was supposed to be the beginning of a tenancy of gigs at the @royalalberthall, but thanks to some fucking bat eating, wet market animal selling, virus making greedy bastards, the whole world is now on hold, not to mention the thousands that have suffered or died from this virus. My message to them other than “thanks a fucking lot” is go vegan. To all the people missing out on our shows, I wish I could be there more than you know. It’s been great hanging out in isolation with my children and family, but I miss my other family, my band, my crew and my fans. Take care of yourselves and hope we can get the show on the road again soon. I’ll be performing a snippet from each album we were supposed to perform for the next few days. X❤️ #songsfromisolation #covid_19 #banwetmarkets #selfisolation #bryanadamscutslikeaknife #govegan🌱

However, numerous other early cases were in people who didn’t frequent the market. This is one of the factors that have led others to suggest that the virus came from one of two Wuhan laboratories studying coronavirus in bats, either in a man-made form or via a lapse in the biosecurity of animal specimens. Donald Trump and members of his administration have pushed this theory, though the scientific community has near-unanimously rejected the idea it could have been manmade. It is not even clear if Wuhan is the area where the virus originally transferred from animals to humans, and there is still no scientific consensus on the source of the outbreak.

Very few, if any, high-profile people have publicly conflated all of these debated areas, though other music stars have attacked the Chinese over wet markets.

Paul McCartney, a longtime vegetarian and animal rights activist, said in April: “Let’s face it, it is a little bit medieval eating bats… They will not close down these wet markets, that got us into this trouble in the first place … It wouldn’t be so bad if this is the only thing it seems like you can blame on those wet markets. It seems like Sars, avian flu, all sorts of other stuff that has afflicted us… and what’s it for? For these quite medieval practices. They need to clean up their act.”

Queen’s Brian May also linked the eating of meat to the spread of the disease, saying: “This pandemic seemed to come from people eating animals … it’s time to re-examine our world in a way that doesn’t abuse other species.”

Adams has consistently released music since his breakthrough in the early 80s, and his commercial peak came in 1991 with the single (Everything I Do) I Do It For You, still the longest-running UK No 1. His two most recent albums, Get Up (2015) and Shine a Light (2019) both reached No 2 in the UK charts. – Guardian