‘I am happy not to have to go away to pursue success,’ Rock told Eurovision winner 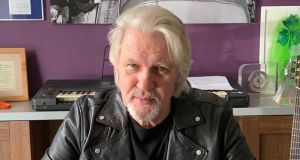 Johnny Logan: ‘Dickie Rock and I have been friends for many years now, and I hope that no lasting damage has been done to our friendship. He is an Irish icon and has my respect’

The Eurovision winner Johnny Logan has apologised to Dickie Rock for remarks he made about his fellow singer in a wide-ranging interview in The Irish Times on Saturday.

“What would Dickie Rock know about being a musician?” he told Róisín Ingle. “Dickie’s idea of an international tour was to have a gig in England. He bought a pub in Spain so he could gig there. That’s the reality of it. We know Dickie in Ireland but go out of here and say ‘Dickie Rock’ and people will think you are talking about some kind of stone you’d find in a museum.

“I love Dickie but he’s a legend in his own head... He lives in a fantasy world. You know, I’ve sang for Pope John Paul, for the queen of England, for Prince Charles, for Lady Diana – when she was alive – for the government of Ireland, for every head of state in Europe... I toured with the Royal Symphony Orchestra. I’ve done the London Palladium, about 20 times, Top of the Pops about 14 times. Get Dickie to match one of those, you know? I’m still touring. And I’m busier now than ever.”

Rock responded over the weekend: “Johnny seems to be blowing off his own achievements an awful lot. Johnny must be very insecure. His career is mostly abroad and he is very successful at it. I’m happy that Irish people know me. I am happy to be at home and not to have to go away to pursue success.” And, he told the Irish Sun: “I don’t have a pub in Spain. That’s not true.”

Rock added: “I’ve done the London Palladium, the Royal Albert Hall. I’ve played Carnegie Hall. Johnny talks about playing for British royalty. Well, I’ve worked with the king of Ireland in Monaco, Michael Smurfit, at his inauguration to be the Irish consul in Monaco. The Smurfits are Irish royalty.”

He concluded: “Perhaps Johnny is unhappy deep in his heart. He had the looks. He had the height. He was a good-looking lad. I’ve said to my wife, Judy, if Johnny Logan hadn’t been born in such a small country, if he’d been born in America, he would have been another Elvis.. There’s no doubt, he has a great voice and great personality.”

Today Logan gave a statement to Liveline, Joe Duffy’s phone-in show on RTÉ Radio 1: “Last week I did an interview with the Times newspaper in which I was asked to comment on a statement Dickie had made. I told the reporter that it was none of her business, which was fair enough, but then went on to make remarks about Dickie, which I meant jokingly. I regret those remarks now, and I apologise publicly to Dickie. Dickie and I have been friends for many years now, and I hope that no lasting damage has been done to our friendship. He is an Irish icon and has my respect.

Rock also gave Liveline a statement: “Johnny Logan was and still is a gentleman and a great performer. We were all friends in this crazy business, and we still will be going forward.”