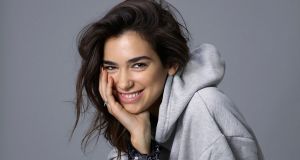 Dua Lipa, the breakthrough pop star who scored a huge summer hit with New Rules, has earned the most nominations at the 2018 Brit awards – even beating Ed Sheeran, despite his spectacular year-long assault on the charts on both sides of the Atlantic.

She was nominated in the British female solo artist, breakthrough act, single and video categories, along with the night’s biggest award, British album of the year. Without being able to be nominated in the breakthrough category, Ed Sheeran is the runner-up with four nominations, for British male solo artist, video and single (each for Shape of You), and the album award for ÷, the biggest-selling album of 2017 in the UK. East London rapper J Hus and platinum-selling songwriter Rag’n’Bone Man each received three nominations.

Lipa’s competition for the female solo artist award comes from Jessie Ware, Kate Tempest, Laura Marling and Paloma Faith – all have been nominated before, with Marling and Faith winning in 2011 and 2015 respectively. Sheeran, meanwhile, is up against a strong field for male solo artist: Liam Gallagher, Stormzy, Loyle Carner and Rag’n’Bone Man, aka Rory Graham, who had the second-biggest selling album of last year, and is also nominated in the album category, alongside Sheeran, Lipa, J Hus and Stormzy.

The third-biggest seller of 2017 however, Sam Smith’s The Thrill of it All, was shut out: Smith received no nominations at all, though the November release date of his album means he is also eligible for 2019’s awards, and he is confirmed to perform at the ceremony. Sampha, the current holder of another prestigious British music award, the Mercury prize, was nominated in only one category, for breakthrough artist.

All five former members of the massively successful British boyband One Direction put out solo material last year, but only three were nominated: Zayn, Harry Styles and Liam Payne.

Stars including Taylor Swift, Drake and Pink were nominated in the three international categories, as was Kendrick Lamar, who – given his tour takes him to London the day before the ceremony – is rumoured to be a surprise performer on the night. As well as Smith, confirmed performers at the ceremony so far include Foo Fighters, giving their first Brits performance in their 24-year history, plus Sheeran, Stormzy, Rag’N’Bone Man and Lipa.

Dua Lipa is a slow-burn success who upended music industry expectations to become the most-streamed female artist in the UK last year. Her upbeat yet melancholy debut single Be the One reached the Top 10 in 2015, but followup singles Hotter Than Hell and Blow Your Mind didn’t match its success. But after her song with Dutch EDM producer Martin Garrix, Scared to Be Lonely, spent 16 weeks in the Top 40, she released New Rules, an irrepressible track on which she sassily dispenses relationship advice with the endlessly quotable chorus: “If you’re under him, you ain’t getting over him”. It quickly ascended to No 1 and spent 10 weeks in the Top 5; its video has been viewed 888m times on YouTube, and it became her first US hit, reaching 11 on the Billboard chart.

Now 22, she was born in London to Kosovar Albanian parents, and moved to the Kosovan capital Pristina with them aged 11, before returning to London at 15, alone, to take GCSEs and A-levels while living with an older female friend. As a teenager she worked as a model for clothing retailer Asos, followed by spells on the doors of London restaurants and nightclubs. She pursued a singing career alongside these jobs by uploading herself singing cover versions and sharing them on social media, earning her a management deal and then a record contract. Despite her return to the UK, she frequently refers to her Kosovan heritage on Twitter, celebrating the country’s independence day, and its first gay pride march, in October 2017.

One Brit award has already been handed out, for producer of the year. The winner is Steve Mac, the man behind three of the 10 songs nominated for single of the year: Ed Sheeran’s Shape of You, Liam Payne’s Strip That Down, and Clean Bandit’s Symphony. Mac’s career stretches back to 1991 when he wrote and produced Nomad’s pop-rave hit Devotion, and he has also worked with Westlife, One Direction and Pink.

The Brit awards are voted for by the Academy, a group of music industry and media figures – except for the breakthrough artist award, which is voted for by the public, and the video award, where a public vote on social media whittles the 10 nominees down to five, before another public vote to decide the winner. The video and single nominees aren’t selected by the Academy, but are rather the year’s most viewed and biggest selling singles respectively.

The ceremony takes place on Wednesday 21 February at the O2 Arena in London, and will be broadcast live on ITV.

Jihad Jane: ‘This story has nothing to do with religion’
7