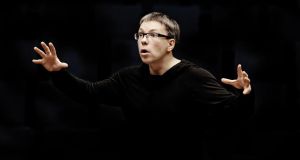 Music of Our Time
NCH, Dublin 1.05pm €5 (students & teachers free) nch.ie
The first of the RTÉ National Symphony Orchestra’s Music of Our Time concerts opens a week in which the orchestra is celebrating the work of Australian composer Brett Dean. He will be the soloist in his Viola Concerto next Friday (he played in the viola section of the Berlin Philharmonic in the 1980s and 1990s) and in his lunchtime concert he conducts his breakthrough work, Ariel’s Music, a clarinet concerto inspired by an American girl, Ariel Glaser, who died from Aids at the age of seven in 1988. It’s paired with Ed Bennett’s Freefalling, a musical response to the record-breaking, 39 kilometre skydive made by Felix Baumgartner in 2012. The soloist in Ariel’s Music in Mark Simpson.

RTÉ NSO/Olari Elts
NCH, Dublin 7.30pm €15-€35/€13-€31 nch.ie
Stravinsky’s ground-breaking 1913 Rite of Spring had to wait until the 1960s for a first hearing in Ireland. We’re a bit quicker off the mark in the 21st century, so the composer’s long-lost Funeral Song of 1908, which resurfaced and got its first modern performance in December 2016, is arriving here just over a year later. The piece, which Stravinsky regarded as the best of his works before the Firebird, was written as a memorial to his teacher Rimsky-Korsakov. It gets its Irish première from the RTÉ NSO under Estonian conductor Olari Elts. Also in the programme are Rachmaninov’s Isle of the Dead, Brett Dean’s Viola Concerto with the composer as soloist and the 1947 version of Stravinsky’s Petrushka.

Beloved – Composers in Love
Town Hall Theatre, Galway, until Sunday tht.ie
Music for Galway kick off their Winter Festival exploration of composers in love with a 4pm talk by Richard Wigmore on Beethoven and the Immortal Beloved. The weekend’s concerts will  trace amorous concerns through music by Strauss, Schoenberg, Robert and Clara Schumann, Janacek, Britten, Wagner, Schubert and Brahms as well as Beethoven. The performers include Galway’s own Contempo String Quartet, two members of The Vanbrugh (viola player Simon Aspell and cellist Christopher Marwood), pianists Dearbhla and Finghin Collins, soprano Sarah-Jane Brandon and tenor James Gilchrist.