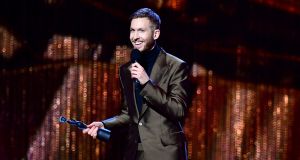 Calvin Harris accepts the award for British producer of the year at the 2019 Brit awards. Photograph: Victoria Jones/PA

Calvin Harris and The 1975 took home two gongs each at the 39th Brit Awards as female artists were snubbed.

Both Dua Lipa and Anne-Marie scored four nominations apiece but these failed to translate into wins, with Lipa securing just one gong – best single for One Kiss with Harris – and Anne-Marie none.

After 16 nominations in 10 years, Scottish DJ Harris won not one but two awards – for One Kiss and British producer of the year.

Alternative rock band The 1975 were named best British group for a second time, two years after they first picked up the prize. Later in the evening they took to the stage again to receive the sought-after British album of the year award for A Brief Inquiry Into Online Relationships.

Lead singer Matty Healy paid tribute to the Arctic Monkeys, their team and his girlfriend.

Outside of the female-only categories, only Little Mix, Lipa and Beyoncé secured gongs.

Ariana Grande won the prize for international female solo artist while Little Mix took home artist video of the year for their collaboration with Nicki Minaj on Woman Like Me.

Beyoncé was awarded the prize for international group, sharing it with husband Jay-Z as The Carters.

The ceremony was noticeably free from any grand political gestures. This diverged from last year’s edition, which featured Stormzy’s explosive medley when the grime artist took aim at Theresa May over the Government’s reaction to the Grenfell Tower fire.

The Brits has often struggled to represent the diverse landscape of UK music. In the past few years organisers have introduced a more diverse voting panel and invited a wider range of artists to perform on the night.

Last year’s ceremony marked an improvement, with Stormzy securing gongs for British male artist and the most prestigious award, British album of the year.

The night did feature rousing performances from a variety of female acts, including Pink. The punk-pop veteran concluded the show with an elaborate performance, which ended with dancers offering a raised fist – a gesture that became synonymous with the Black Power movement and symbol of resistance.