Let the lute one in: this week’s classical highlights 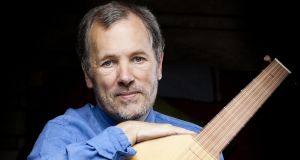 Nigel North: His programme at the NCH in Dublin on Wednesday is an all-Bach affair

Leading English lutenist Nigel North is the cuckoo in the nest at the National Concert Hall’s current International Guitar Series. However, given the rarity of lute recitals in Dublin, he is a welcome intruder. His programme is an all-Bach affair and he takes a leaf out of the world of the guitar by focusing on arrangements and transcriptions. He opens with a lute version of the Partita in A minor for solo flute, and follows with the Suite in E minor, BWV 996, a piece which is marked “aufs Lautenwerck” in an early copy – the Lautenwerck or lute-harpsichord was a mellow-toned, gut-strung harpsichord which was made in a range of shapes. And he ends with the Partita in E, BWV 1006a, Bach’s own arrangement of his Third Partita for solo violin. The series is curated by Redmond O’Toole, who will give March’s recital (on Thursday 28th) on his trademark eight-string guitar, which is played vertically, like a cello.

The four-day New Music Dublin festival promises world premieres of 22 new works, 18 of them commissioned by the festival itself, with “nearly everything else” being heard in Ireland for the first time. Jennifer Walshe’s The Site of an Investigation and David Fennessy’s Conquest of the Useless (postponed from last year’s snow-afflicted festival) make up the opening concert by the RTÉ NSO under Jean Deroyer. On Friday the RTÉ Concert Orchestra under Robert Houlihan pair major pieces by Kaija Saariaho (Graal théâtre) and Louis Andriessen (Vermeer Pictures), the festival’s two international featured composers. Five works by Andriessen will be featured in all, and three by Saariaho. Visiting performers include Germany’s Ensemble Musikfabrik (who offer a selection of Frank Zappa) and members of Paris’s Ensemble Intercontemporain. Norway’s Grete Pedersen conducts Chamber Choir Ireland, in a programme that includes a new work by Deirdre McKay and Maja Linderoth’s Sonatform denaturerad prosa, a homage to Kurt Schwitters’s Ursonate. The final bash – and bash is the appropriate word – will be a free Crash Ensemble performance of Louis Andriessen’s Workers Union, a thumping centrepiece of Crash’s debut programme back in 1997.

Cork’s Ortús Festival, the brainchild of violinist Mairéad Hickey and cellist Sinéad O’Halloran, is now in its fourth year. It’s modelled on the mix’n’match principles of the West Cork Chamber Music Festival, with the two founders creating ensembles that bring together friends and colleagues from at home and abroad. This year’s big pieces are piano quintets by Dohnányi (his First) and Schumann, Seán Doherty’s No Go for uilleann pipes and string quartet, and Messiaen’s Quartet for the End of Time. Also on offer are works by Elaine Agnew, Beethoven, Brahms, Dvorak, Gál and Stravinsky, and the line-up of players includes piper Fergal Breen, violinists William Hagen and Patrick Rafter, viola player Timothy Ridout, cellist Ella van Poucke, clarinettist Jessie Grimes and pianist Michael McHale.