‘Eamon said this beautiful thing once - he said ‘Bono, Ali is the best thing about you’’

With evocative montages of the American west scrolling on screens behind them, U2 kicked off the US leg of their 'Joshua Tree' tour in Seattle over the weekend. The tour is the top-selling concert in the US this summer. Video: REUTERS 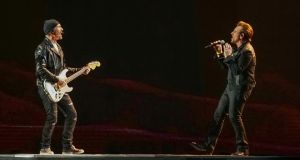 The Edge performs with Bono during the opening concert of U2’s global The Joshua Tree Tour 2017 in Vancouver, Canada on May 12th. Photograph: Nick Didlick/Reuters

U2’s Bono and Edge have hailed the “exceptional bravery and power of the women’s movement” in leading the protest against the Trump administration in the US.

The pair were speaking in Seattle on Sunday night before they took to the stage for the first night of their Joshua Tree 30 tour in the States.

Bono also revealed that their next single - which may not be released until next year - was directly inspired by sports pundit Eamon Dunphy.

“Eamon said this beautiful thing about me once in a bar in Dublin - he said “Bono, Ali is the best thing about you,” referring to Bono’s wife Ali Hewson.

“So the song is called ‘You’re The Best Thing About Me’.”

Speaking about politics, Bono said that while people who voted for Donald Trump are “more than welcome” to their US shows, the President himself is not.

“I see my own daughter with her clenched fist and her ‘Pussy Power’ hat on at a woman’s march and I’m so proud of her” says Bono.

“It’s women who are really grabbing a hold of the protest and dissent against what’s happening now and the women’s movement needs to be recognised and saluted for taking this leading role”.

Edge criticised the lack of a protest voice from within the music world to the political changes of the last 12-18 months, saying:

“Music has been very muted in its response. The only connect and the only response to what is happening is coming from the women’s movement — they have the vision and they’re doing important grass-roots work”.

A centrepiece of the band’s Joshua Tree 30 show is a visual roll call of pioneering women projected on a the main screen during the song ‘Ultraviolet (Light My Way)’.

While confirming that he would not be interested in meeting Donald Trump, Bono defended his meeting with vice president Mike Pence in February.

“Sometimes you’ve got to work with people who you don’t look good in a photograph with. I actually lost friends - fell out with them badly - over meeting Mike Pence. But I can deal with people of conviction - even if Mike Pence and I have nothing in common.

“I went in to talk with him about Aids relief in Africa. I saw it as my job to do so,” he said.

The singer said he feels the terms “left-wing” and “right-wing” have become somewhat redundant in the aftermath of Brexit and Trump.

“The old demarcations make no sense any more. We have to understand better that globalisation isn’t working for everyone and old school protectionism is not the answer — neither is an unfettered free market.

“We specifically need to understand why it was that 52 per cent of college educated women voted for Trump in last year’s election”.

“There has been a hostile takeover of the Republican party - the party of Lincoln - by Donald Trump”.