The KnockanStockan festival and Mac DeMarco are among the other highlights 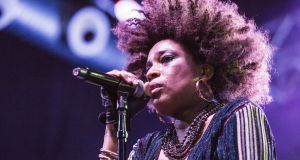 The Most Wuthering Heights Day Ever
Fairview Park, Dublin

In all your days, how many Cathys dancing around in a red gúna have you taken in in one glance? One? Two? Well then, you are in for quite the treat when hundreds of Cathys descend upon Fairview Park to recreate the dance routine from Kate Bush’s video for Wuthering Heights. There is a €5 registration fee and for an extra tenner you can pick up a long brown “Cathy” wig. This event is also raising money for Women’s Aid, with all donations welcome. LB

Mac DeMarco is the oddball that made good, a naïve singer-songwriter who gradually gained the necessary levels of experience to take him out of a few dead-end jobs and into a full-time career as a musician. The Canadian delivers loose-ended indie-psych/pop but has often been known to deviate from the music by doing a few magic tricks and comedy sketches. Let’s hope there’s more music than off-kilter attempts at laughter. Special guests include London nu-folk singer-songwriter Beabadoobee (aka Bea Kristi) and Australian songwriter Kirin J Callinan. TCL

There are few things in this life that can’t be improved upon by adding horn and instead of going in by halves, New Orleans group Hot 8 Brass Band rework old favourites like Marvin Gaye’s Sexual Healing, Snoop Dogg’s Who Am I (What’s My Name?) and Joy Division’s Love Will Tear Us Apart by adding brass on top of brass in a glorious fusion of jazz, funk and hip-hop. Their music is the midweek smattering of joy you deserve. LB

This Dublin date is the final one for the European leg of Garbage’s tour, so expect a little bit of relief and a whole lotta energy. The band previously played Ireland at last year’s Electric Picnic, but that was a catch-all show. This one is for the focused Garbage fan, the ones who were there from the 1995 self-titled debut album and who stuck with them all the way to 2016’s Strange Little Birds. Throughout the years, they have maintained their semi-perverse MO of (as guitarist Steve Marker once said) taking pop music to “make it as horrible sounding as we can”. A cracking band, and in Shirley Manson they have one of the best and most influential front-of-stage women in rock/pop. Special guests are Limerick band Whenyoung. TCL

If ever there’s a doubt in your mind that there’s not much happening in Irish music right now, then look no further than this gig. In a double headline slot, pop-grunge rascals Bouts and ’80s synth-pop queen Odú are not only proving that Irish music is very much alive and kicking, but they’re kicking down the divider between genres while they’re at it. And in an inspired choice, they have the hilarious folk-pop artist CMAT supporting them on the night. LB

Just how many iterations can a famous rock singer go through before they end up back where they started? When it comes to Robert Plant, the answer is (quite likely) as many as he wants. The man voted by Rolling Stone (and other publications) as rock music’s greatest lead singer has long since left the heady glory days of Led Zeppelin behind him. For almost 20 years, he has immersed himself in his first loves – folk, blues, country – in a variety of groups (Priory of Brion, Strange Sensation, Band of Joy, Sensational Space Shifters) and collaborations (Alison Krauss). Now he fronts Saving Grace, a folksy group whose music, we are reliably informed, is inspired by “the dreamscape of the Welsh Marches”. Plant usually throws in a few Led Zep tracks, but expect them to be noticeably rearranged. There are some tickets left for the Dublin show; otherwise, sold out. TCL

The small town of Vinton, Iowa – effectively, the middle of the US heartland – is now on the map thanks to songwriter Elizabeth Moen. Inspired by literature and languages, as well as by artists such as Joni Mitchell, Alabama Shakes, Stevie Nicks, and Sharon Van Etten, she has spent the past few years ducking and diving around the fringes. Her self-titled debut EP was released three years ago, and since then she has grafted away, presenting folk/blues tunes that very quickly win over the listener. This is Moen’s debut headline gig in Ireland – make her welcome. If for some reason you can’t make it, she also performs at KnockanStockan this weekend. TCL

You have to hand it to KnockanStockan – it’s a long way from their start as an open-air festival 10 years ago, but here they are again – knock’n’stocking it out of the park with a line-up that consists of virtually all Irish acts. Like with a few other similar festivals (including Vantastival and It Takes a Village), the line-up can be regarded as a broad overview of just how healthy the national music scene is. There are far too many acts that you should see across the three days, so to mention a mere handful would be unfair. Just go. TCL

There’s a general buzz in every corner of Galway during the Galway International Arts Festival, with local and international creatives wowing us at every turn, but Pillow Queens and The Claque, two homegrown acts, are worth your full attention. Providing melancholic yet upbeat lovelorn bops on the night are queer pop-punk band Pillow Queens, and taking care of static and avant-pop melodies are The Claque, a band from Dublin who have set more than a few hearts a-flutter with their debut single Hush. LB

It is a measure of this Westmeath band’s rapid but deserved success that they are able to headline these reasonably major gigs (they also headlined a Live at the Marquee show in Cork about two weeks ago, although not to a capacity crowd) with just one album to their credit. That the album is, from start to finish, one solid piece of unspoiled indie pop is obviously to their favour, especially when the contagious singalong choruses kick in. TCL

So many positive things have been said of US singer Kevin Morby – about his music, his influences, the way he can speak the parlance of rock, pop, folk and varying strands of it and get it right on the money. Morby’s latest (and fifth) album, Oh My God, captures in equal parts the optimism of an idealist and the pragmatism of a bruised human being. In parallel with the philosophising and the doubts run threads of quality music that unashamedly seduce the listener. The man plays Dublin rarely, so look sharp. TCL

One of the last times that Macy Gray played in Ireland was in the National Concert Hall, and even though she ruffled a few feathers by arriving late on stage, she made up for her tardiness with her ability to spin a long-winded yarn between songs. A huge personality with an even bigger voice, the I Try singer is an all-round entertainer and if you thought she was limited to her 1999 smash, she’ll gladly prove you wrong. LB

Is Burt Bacharach the oldest songwriter/performer to have ever played an open-air gig in Ireland? (Actually, we’ve just checked, and at the grand age of 91, Bacharach beats Ennio Morricone by six months.) Fact is, Bacharach is a songwriting behemoth, responsible for (in collaboration with his songwriting partner Hal David) creating such a large amount of songs in a recognisable pop/jazz style that they are widely known as the “Bacharach Sound”. A creative genius? That isn’t too much of an exaggeration. Special guest is Irish songwriter/performer Paddy Hanna. TCL

Two of Cork’s finest techno nights, Under the Rose and Bastardo Electrico, are coming together for a woozy n’ whomping summer special. With Mancunian Setaoc Mass flying in from Berlin, this is set to be the heavy kind of night you pine for in the depths of winter. Sam Coates, the man behind the Mass, has been releasing a steady stream of EPs since 2011 – mostly on his own label SK_eleven – so there will be no shortage of tunes to feed this starving dancefloor. LB

Sex and the Irish: We were always a law unto ourselves
9