Are multimedia performances the future of live classical music? 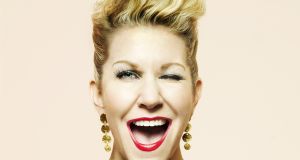 Addressing the audience between encores, DiDonato reminded them of her Irish-American roots – she was born Joyce Flaherty

It was appropriate that last Thursday evening’s audience at the National Concert Hall had made their way there through a heavy electrical storm. The atmosphere generated in the auditorium – by paragon US mezzo-soprano Joyce DiDonato backed by Italian early music ensemble il pomo d’oro and a posse of creative collaborators – was scarcely a volt less highly charged.

On the classical concert platform a heady mix of extra-musical elements is still the exception rather than the rule. But it was hard to imagine how, without the dry ice, the vibrant lighting, the nervy abstract video projections, the arch choreography, the Mac makeup or the Vivienne Westwood outfits, the music by Baroque masters Leo, Purcell and Handel could have made its impact with equal force.

Titled In War and Peace: Harmony through Music, DiDonato’s programme is already available on CD and has toured across Europe and the US. It decisively lays to rest a perennial problem with the well-worn opera-gala concert formula, which – with the object of showing off an individual’s vocal talent and perhaps reminding the audience of a few favourite melodies – treats a range of dramatic works to quotation out of context.

DiDonato’s vision is not Tolstoyan, but rather a series of reflections on two opposed states of being that she powerfully combines within herself as a kind of bipolar allegorical figure. Arias from Handel’s Agrippina, Giulio Cesare, Jephtha, Rinaldo and Susanna, Leo’s Andromaca and Purcell’s Dido and Aeneas and The Indian Queen are drawn together by the common themes of conflict and (albeit to a lesser extent) resolution.

During three instrumental interludes, when lesser artists might retreat offstage, DiDonato remains a statuesque presence on the platform, her own persona counterpoised by that of choreographer-dancer Manuel Palazzo, and never losing its hold on the audience. Few opera singers of the highest calibre would feel the need to dramatise their concert performances in this way; few enough would have the panache. Yet fewer still could convince as firmly as DiDonato did on this occasion that if an aria is to be more than just heard, it has got to be more than just sung.

Musically speaking, the pairing of DiDonato’s lyric coloratura voice with the Baroque instruments of il pomo d’oro augured well for the developing rapprochement between mainstream and period performance techniques. Simultaneously providing an always-discreet continuo at the harpsichord, Russian conductor Maxim Emelyanychev struck a fine balance between dramatic thrust and classical poise, the violin scrubbing of the more martial arias energising but never overworking the delicate gut strings. And some impressive versatility was on display in a stylish cornet solo from Emelyanychev (the Sinfonia from Cavalieri’s Rappresentatione di anima e di corpo) and in the beguiling piccolo recorder playing of violinist Anna Fusek (Handel’s Augelletti, che cantanti).

Addressing the audience between encores, DiDonato reminded them of her Irish-American roots (she was born Joyce Flaherty) and, without concealing her disappointment at last year’s electoral outcomes in Europe and the US, alluded to the fundamental optimism underlying her In War and Peace project. In choosing for her final encore Richard Strauss’s Morgen! Op 27 No 4 (deftly arranged for period band with lute substituting for harp), DiDonato could hardly have forgotten the composer’s well-known Nazi associations. Yet the unspoken message was clear: there can be “harmony through music” only when politics is laid aside.

Many present last Thursday may find it hard to resist the idea that multimedia-enriched performances of the Joyce DiDonato-kind represent the future of live classical music. For those who returned to the NCH on Friday, however, there was reassuring proof that the business of playing and singing without the aid of visible accessories still has more than enough life left in it.

If not by the weather, you can tell it’s summer when the RTÉ National Symphony Orchestra renounces its staple fare of Austro-German and Russian repertory for, in this case, a thoroughly Latinate programme. The composers were French (Debussy, Ravel, Canteloube), Spanish (Turina, Albéniz), Brazilian (Villa-Lobos) and American (Gershwin, qualifying for inclusion with his Cuban Overture of 1932).

The ways of Hispanicising an orchestral score are not infinite, and Turina’s La procesión del Rocío, Debussy’s Ibéria, Ravel’s Alborada del gracioso and Enrique Arbó’s transcription of Albéniz’s piano solo Navarra were all interpreted in a manner that emphasised mutual similarities rather than contrasts. But that is not to say the performances, directed with great aplomb by young British guest conductor Duncan Ward, were any of them less than excellent.

Ward is one of those conductors who seem permanently in contact with every last member of the orchestra. When the harmony or the tempo changes, it does so in absolute synchrony, nothing being left behind to blur an edge. When diverse instruments join forces in unison, each adds to, rather than takes away from, the tone-colour of the others. The effects are kaleidoscopic.

If there was anything to regret in such vivid sonorities, it was that they could, in three of Canteloube’s Songs of the Auvergne, get in the way of the gorgeous whipped-cream tones of Japanese soprano soloist Mari Moriya, who reserved her not inconsiderable power of projection for moments when the music called for it. Her judiciousness was especially evident in a treasurable account of Villa-Lobos’s sultry Bachianas brasileiras No 5, when, with the accompanying forces reduced to the orchestra’s eight cellos, the balance could take care of itself.

Seamus Heaney, our dad the poet, by Catherine, Chris and Mick Heaney