The latest from Major Lazer with Justin Bieber, Father John Misty, Walking on Cars and The Chainsmokers featuring Hawley 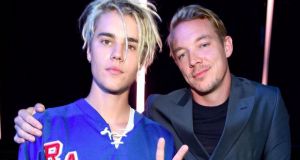 MAJOR LAZER ft. JUSTIN BIEBER & MØ
Cold Water HH
Mad Decent
After 15 weeks at number one, Drake’s One Dance single had just equalled Wet Wet Wet’s Love is All Around, and was on the brink of overhauling Bryan Adam’s Everything I Do (I Do It For You) as the longest-standing UK number one single of all time, when it was knocked off its perch by this bite-sized serving of pop piffle. Written by Ed Sheeran and Benny Blanco, with vocals by Justin Bieber, Cold Water finds the Biebs boldly promising to be his beloved’s rock of support, stability and common sense in a world gone mad. Let us know how that works out, Justin.

FATHER JOHN MISTY
Real Love Baby HHHH
He may have made headlines for his outbursts onstage at various festivals this year, but this standalone new single from Josh Tillman’s clerical alter ego is as breezy as a summer wind and as welcome as the flowers of May.

WALKING ON CARS
Ship Goes Down HH
Virgin/EMI
First their debut album Everything This Way topped the Irish charts in February. Now Kerry natives Walking On Cars have just sold out a headline show at the 3Arena in Dublin later this year. All of which is highly commendable. Yet, being honest, you’d have to admit the band’s fourth single is a walking horrorshow of clichéd lyrics, overwrought vocals and generic daytime radio playlist-oriented production values.

THE CHAINSMOKERS ft. HAWSLEY
Closer HHH
Columbia
The love interest in The Chainsmokers’s new track “moved to the city in a broke down car . . .” Which accomplishment was impressive enough, I’d have thought. But then she only goes and turns up four years later looking pretty in a hotel bar. Andrew Taggart and Alex Pall’s latest smash hit single is about getting back with one’s ex- against one’s better judgement. (Well, is there any other way?)