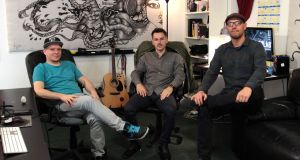 There are new sounds and flavours on offer in the Irish music scene. While the UK has been creating soul, rap and R&B acts for many years, Ireland was slow to catch up. But in recent years, a more multicultural population and an increasingly savvy young demographic, which is able to access global sounds and quickly learn techniques that were too expensive to access in the past, means that there is considerable activity in those genres. R&B, soul, electronic, rap, drum ‘n’ bass, dubstep are wells to draw creativity from. Tribal lines aren’t there to be defined by; boundaries are there to be crossed.

At the forefront of this new line of thinking, in terms of new artists and production, is Diffusion Lab, a still nascent company that has already made a dent in the Irish music scene through its work with artists such as Hare Squead, Soulé, Jafaris, Erica Cody, Super Silly and Aikj.

Diffusion’s story is one that largely takes place in an office on Dublin city quays. Ivan Klucka and Chris Bubenzer met at a drum ‘n’ bass night in the Twisted Pepper a few years back and both remember their first meeting being quite frosty.

“We didn’t get on that night,” says Klucka laughing. “It’s a small scene and everyone’s trying to be supercool,” offers Bubenzer, by way of explanation.

The drum’n’bass scene waned in popularity as house and techno took over the city’s clubs but something sparked between the pair. They hatched a plan to produce music together. Both were working in music shops for a living – Klucka in HMV and Bubenzer in Music Minds. Once they secured a building to work from, they spent every moment after work there. There was no time for anything else, relationships or otherwise.

The new sound It took a while to figure out what the Diffusion Lab sound was. Bubenzer

had spent 15 years as a drum’n’bass producer in his native South Africa and that style was a natural fit for him but Klucka argued they needed to leave it behind if they were going to grab listeners.

“It was a hard one to swallow for a long time as I was a purist,” says Bubenzer. “But he’s completely right.”

When three lads from Tallaght and Blanchardstown, the makings of R&B and soul dance pop trio Hare Squead, walked into Bubenzer’s shop and played him a few demos, he gave them so advice.

“I said it was cool but not quite there yet,” remembers Bubenzer. “I didn’t think they’d take that on board as I was just some guy in a shop. They came back a year later and asked me to do some house music-style beats for them.”

Klucka says their office, with two studios to work from, attracts new artists looking to try out some ideas. “We’re just trying to create something. It’s all good vibes. Sometimes they just come here and hang out and watch other artists. In an artist’s early stage, if you offer good but cheap production and have a space that you can come to anytime you like, that’s the foundation for us.”

Bubenzer’s drum’n’bass past can be heard on the production of Soulé’s Choice Song of the Year-nominated Love No More. Jafaris’ track Love Dies has a head-nodding R&B swagger while Rushes’ debut Wild High has the sounds of the pop zeitgeist embedded in its production.

“The likes of Diplo and Skrillex brought that electronic side to the pop scene,” says Bubenzer. “Working with good songwriters has changed my perspective on things.”

With Diffusion Lab forming its aesthetics and goals, Marcin Ciszczon, a producer, jazz pianist with mixing and mastering experience was brought into the fold. “When he came in we clicked and it was like the trinity,” says Bubenzer.

The business side of Diffusion Lab started to develop out of necessity. Klucka, who operates in a studio manager role mainly, now also manages Soulé and Jafaris, and they introduced another new artist Rushes last month.

He is the first to admit that Diffusion don’t know everything and that they are still figuring things out as they go. He often asks others for advice. “No single person said no,” he says. “That’s why I love Ireland. Everyone is very supportive.”

If Diffusion can do it themselves, they will, as Soulé’s debut video for Love No More shows. The team had €350 budget to spend but rather than hire someone for cheap, they spent the money on camera equipment hire for one day and made the video in the studio against a backdrop. Chris then learned After Effects and spent two painstaking weeks animating every frame in the video.

“It’s funny when I went to the UK, people I was talking to thought there was a €30,000 budget for that video,” chuckles Klucka. “I didn’t tell them the truth.”

That DIY streak is further evident in their business operations. They advocate an artist owning their own masters and having complete creative control. They offer distribution services to their artists and don’t take royalties. While they are developing their own artists, they won’t stand in the way of a major label coming to sign an artist like Soulé, if that happens.

Diffusion Lab are excited about the future and want to see more producers and teams like themselves. “Sure, there are lots more pop, soul, indie R&B and dance acts but we need more producers to help lift the scene,” says Klucka. “That’s how you create legacy and a long term vision. We can create a great pop hit and we can make big artists come out of Ireland. It’s very possible now.”