Hannah Reid on how the band got lost on the road, and working with ‘rock star’ producers 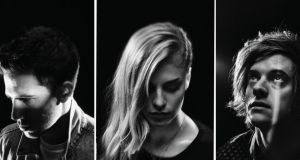 London Grammar: “All you can ultimately hope for is longevity and to carry on making music”

Some bands navigate the route from obscurity to success very well. Some falter, fade away and are never seen again. Others stumble from the start, retreat from view, revise plans, buckle the belt and then emerge renewed.

Hannah Reid, singer and main lyricist of London Grammar – the English band that were plucked from the fringes four years ago and positioned directly under the spotlight, only to melt into a puddle – knows all about the pressures that come from inexperienced musicians being shepherded by overzealous supervisors. What should have been a manageable rollercoaster ride – the band’s debut album, If you Wait, sold more than two million copies, won an Ivor Novello Award, and was iTunes Album of 2013 – turned into an unhealthy, unsettling lifestyle.

“At the time, you’re not really aware of what’s actually happening,” says Reid, soft-spoken to the point you have to strain to hear what’s being said. “The only negative thing about it was that we toured too much. There’s a big difference between touring and touring too much – the former is controllable, the latter isn’t. Yes, it was amazing – we were never chased down the street, or anything like that – but the success part was incredible. In touring too much, however, we learned about certain things the hard way.”

It must be difficult for a band to be thrown into the limelight and to be afraid of retreating at the risk of losing momentum? “To be completely honest, we were so young it wasn’t really our decision.” Reid hesitates. “Maybe some people wanted to make the most out of it.” She allows the sentence to drift. “Em, yeah.”

Presumably, London Grammar are now in charge of their touring schedule? Reid brightens up. “Absolutely. We’ve made sure that everything is manageable so that we can be musicians.”

The band members met in 2009, while they were students at Nottingham University. It was while Dan Rothman was looking at one of Reid’s profile images on Facebook that he noticed a guitar. He asked her if she wrote songs. She said yes. Within two years, playing pub gigs in front of friends evolved into a sequence of showcase gigs in front of record companies. The band’s music template of The xx meets James Blake meets Portishead turned their fortunes around.

When If You Wait was released, London Grammar were viewed as the hippest band around. For some acts, this can be beneficial; for others it’s the kiss of death. How did the band feel about that?

If you’re no longer the coolest band around, then it doesn’t really matter, does it?

“We were quite unaware of what people were saying,” recalls Reid, “or what the perception was, because we were touring so much, but you have to accept that kind of chat and just let it go. We’re so lucky to have had what we had the first time around, and all you can ultimately hope for is longevity and to carry on making music. If you’re no longer the coolest band around, then it doesn’t really matter, does it?”

Indeed, but with such a level of media focus and attention was it difficult to negotiate? “It was, definitely. It was all such a blur, as I’ve said, but the work rate was relentless. I don’t even remember what I felt about things.”

Interestingly, what pulled the band through these anxious times was the admiration of their fans. “They care so much about what you have created. Real fans will stick with you, no matter what you experiment with, musically.”

For a songwriter who treasures her privacy, it must be very gratifying to know that what she has written in seclusion can mean so much to people she has never met before.

“Oh, it’s amazing, and that’s the beauty of music. It’s one of the reasons why I’m a musician – I grew up listening to songs that meant so much to me. I had no idea what those songs meant to the performer or singer, or the person who wrote them, so to have people come up to us and say how much the songs mean to them is a wonderful thing. To be honest, it’s things like that which make it all worthwhile.”

London Grammar’s new album, Truth Is a Beautiful Thing, sees the band shift ever so slightly towards a more commercial direction. While still fusing chilled-out trip-hop with a canny knack for insidious melodies, this time around they have made connections with heavyweight, chart-friendly producers such as Paul Epworth, Jon Hopkins and Greg Kurstin. Different styles, different work practices – what did the band learn from each?

Paul Epworth has enough self-confidence and belief in the work you’re doing to carry on well into the night, and make sacrifices to get things done

“It really is like being in a room with rock stars,” she says, before outlining what each producer brought to the mixing desk.

“From Paul Epworth we learned how important it is to persevere with songs. He has enough self-confidence and belief in the work you’re doing to carry on well into the night, and make sacrifices to get things done. Greg Kurstin was astonishing, musically – he can play virtually any instrument and use something in a song that you wouldn’t necessarily have thought you could do. He is by a mile the nicest man in music, and from a psychological point of view he’s so relaxed that he brings out the best in people.”

Which leaves Jon Hopkins. Reid’s voice drops ever so slightly. “Well, because he works remotely we never actually got into a studio with him. He has said that he doesn’t consider himself to be a producer – he considers himself an artist. That said, the way he works is, he takes sounds that are already in the songs and then manipulates them. With us, he put his own stamp to the music without taking away from the sound we created.”

And your favourite producer of the three? Reid isn’t saying. Or is she? “We begged Jon to do more, but he said he was too busy.”

Sufjan Stevens: The Ascension review – Reaching for something to believe in
9