'I thought The Redneck Manifesto was a huge cult band from the States, not down the road in Crumlin'

This album changed my life: Lar Kaye of All Tvvins on The Redneck Manifesto's 'Thirtysixstrings' (2001) 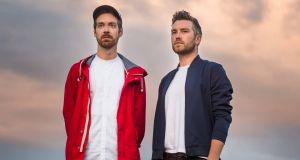 Lar Kaye with All Tvvins bandmate Conor Adams. For Kaye, the 'Thirtysixstrings' album showed him what an Irish band could achieve when he was a teenager.

When I was 17, I was given this record by an old bandmate and I vividly remember his enthusiasm for what I was about to experience. The opening guitar tones of You Owe Me Five Potatoes still transport me back to that period of time: school, boredom, confusion. It just had so much emotion and beauty about it.

My life at this time was essentially just school, playing in a band and rehearsing at every free moment I had. We all worked out of a small studio in Crumlin and this album was constantly on loop. When I heard that the band were Irish and rehearsed and lived down the road from where we were based, that blew my mind.

I had been living and breathing this record, believing that this was some huge cult DIY band out of the States or somewhere more “exotic”, not just down the road in Crumlin.

This is another reason why this record changed my life: it gave me a focus and set the bar for creativity. It showed me what an Irish band could achieve. The emotion I felt from all the tracks was now in context with my daily surroundings and all the sights I had grown up with.

Listening to it nowadays, the guitar riffs on the second track Sweet Pot are still so slick and futuristic to me. I must have jammed along to that track a thousand times at home.

From the depths of our own rehearsal space in Crumlin, inspired by The Redneck Manifesto, we formed a band called Adebisi Shank. We got to record and release music, travel all over the world on our own terms. As a group of close friends playing and believing in what they were creating, I don’t think I would have had the same outlook on life had it not been for this record.

The Music Quiz: Which U2 video features an appearance of Boyzone?
9