Stevie G: ‘In Cork everything seems to be open for six months’

In the How Music Works series, Niall Byrne talks to people about their life’s work in music. This week, Cork DJ Stevie G 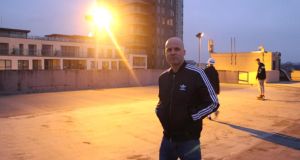 Stevie G has been a DJ for 25 years: ‘I’m just happy to be doing what I’m doing’

Stevie G is a Cork music institution, and not in the heritage sense. While Grainger is one of the DJs who got his start at the internationally-renowned club Sir Henry’s back in the day, he doesn’t rely on well-earned nostalgia for his reputation. Grainger has been one of the most active elders in the Cork music community since he established himself – always opening doors for new talent and encouraging new artists in their careers. The backbone of it all is DJing, which he has been doing for 25 years, which he seems to do every night judging by his Instagram account, whether in the clubs of Cork city or on air on Red FM, as he has been for 17 years now.

“It’s been good fun since I was a teenager and I still kind of am a teenager, so that’s one thing that I do like about it,” Grainger says. “Working in music is pretty hard to get by. But to be honest, I’m just happy to be doing what I’m doing. ”

Grainger’s latest protege is Jay Ronic, a Cork-based rapper who is delving into trap and Afrobeat-accented hip-hop. Grainger’s excited about new sounds developing around him, particularly a trend of hip-hop made without studios with laptops and rudimentary software.

“It’s not really about big studios, it’s more about little hooks and ideas and even though lots of the older people are complaining – as they always have done – about young hip-hop, there’s lots of really good melodies and hooks in modern rap music.”

It hasn’t all been good cheerleading. Cork is going through a turbulent time in terms of its music venues. Ever since The Pav closed in 2014 (Grainger was working on shows there), venues have been an issue.

“In Cork everything seems to be open for six months,” he says. “I’ve had an awful time of it because I have some brilliant club nights and no venues besides Cyprus Avenue, which have always been brilliant and 100 per cent supportive, there hasn’t been too many other venues.”

Grainger says he sees hope in the Hanover / AMP / Church venue, which is newly-reopened and putting on shows again. “It’s kind of frustrating that it takes so long but when it does happen I know from the past that it’s worth it. I’m trying to just stick to my guns.”

Grainger lost his daytime radio show on Red FM at the same time as The Pav closed, but he’s still doing two shows on the station. His hip-hop, R&B and jazz show Black On Red has been running since the station started in 2000 and Friday and Saturday nights he can be found hosting a show that he’s recently made more of a live experience, with live guests and interactivity, amplified by Facebook Live streaming.

“We all know how limited radio can be in terms of variation. So rather than just be on the outside, I still prefer to be on the inside on mainstream radio but I can still sneak other things in.”

As well as club nights, Grainger has been developing a new show with dancer Andrea Williams after the pair teamed up on dance classes. The show can work at festivals as a distinctly different offering to a DJ set.

“At festivals there are shorter sets and I find it a bit frustrating when you can only play for an hour. So I wanted to do something different. It’s another angle because realistically I’m not going to be booked for a four-hour gig at a festival. Everything has elevated in the last 15 years. You have to put on some different degree of entertainment and bring it up a level and move on.”

Grainger is a positive soul and he points to the likes of Diffusion Lab, Word Up Collective and Rusangano Family around Ireland as examples of artists in the sphere of music he loves who are progressing and working the industry angles right. “There’s lots of people thinking about the industry,” he says of the Cork scene today. “Everyone was just in bands or DJs before. I’ve always said to youngsters at all the workshops I’ve ever done – that like everyone wants to rap or DJ or produce music, but we need as much sound engineers, marketing people and managers.

“It’s actually bearing fruit to be honest now. There’s more ambition and awareness. I think the best is definitely yet to come.”