Muldoon’s Picnic: a variety show from a Pulitzer winner

‘It’s one of our most basic instincts; to listen to a song, listen to a poem – even in this era when people have their noses stuck in their tablets, it still works’, says the poet Paul Muldoon 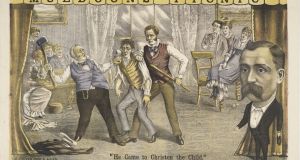 How would you describe a poet going on tour around Ireland with a house band and a selection of guest artists from the worlds of literature and music?

The poet concerned, Paul Muldoon, calls it an “omnium-gatherum”. Those of a more prosaic turn of mind opt for “variety show”. It’s strange that there’s no word in our vocabulary for a gig that is all about words, whether in the form of songs, poems or stories. As for the prolific, Pulitzer prize-winning poet, celebrated for his technical bravura and playful use of language, is he really stuck for a single word?

“I’d say that fun is the hallmark of it,” Muldoon says. “We like to keep things moving – it moves along at quite a lick. There are two acts, usually, and each of the guests appears in each act. So it zooms along.

“It is a variety show. Not quite to the extent that Sunday Night at the London Palladium was a variety show. We don’t exactly have people doing illusions or magic tricks, and then follow that up with someone doing a little dance.”

But then, he corrects himself, that’s not quite true. “We do have dance. We had Jean Butler in New York. We usually have a poet, a prose fiction writer and a musician or two.”

Muldoon, who has lived in the US since 1987, has been writing song lyrics as well as poetry for years. His songs have often been published in beautifully-produced and dazzlingly illustrated little books; the most recent, Sadie and The Sadists, appeared earlier this summer. This live show was born at the Irish Arts Centre in Manhattan, where it has been playing to packed houses every spring and autumn.

Over there, they call it “Muldoon’s Picnic”. The title refers to a popular 19th-century New York vaudeville act. In the 1880s, plays by the Irish-American playwright Edward Harrigan – complete with musical numbers and knockabout comedy – were the talk of the town. In fact, a contemporary guidebook reported that “a visit to New York would be as incomplete to the countryman if he did not see Harrigan and Hart, as if he had by some strange mistake missed going to Central Park”.

One of Harrigan’s most popular sketches, which may have had its first performance as early as March 1874, was called Who Owns The Clothes Line? At the heart of the item was a song called Muldoon the Solid Man, which made fun of an imaginary Irish-American politician called Michael Muldoon.

No relation, obviously. Still, there are parallels. “The term ‘Muldoon’s Picnic’ became synonymous with a kind of outrageous, uproarious spree,” Muldoon says. “We use a logo based on the New York logo from 1880, with a horse and cart all topsy-turvy.”

After a night at the Edinburgh International Book Festival, the Irish incarnation of Muldoon’s Picnic kicks off at the Solstice Arts Centre in Navan and – thanks to funding from Poetry Ireland, the Arts Councils North and South, and Culture Ireland – wends its merry way to the Abbey Theatre in Dublin via Galway, Cork, Carrick-on-Shannon and Belfast.

It boasts an impressive line-up of guests, assembled by Muldoon himself, thanks to a month of intensive emailing back and forth. In Cork he will be joined by master fiddler Martin Hayes, novelist and music nut Patrick McCabe and the actor and Beckett specialist Lisa Dwan. The Abbey show will feature Paul Brady, Camille O’Sullivan, Jennifer Johnston and Eavan Boland.

Three musicians – ex-Pogues singer Cait O’Riordan, drummer Ray Kubian and guitarist Chris Harford – will provide musical backbone for the entire tour. They belong to the collective, Rogue Oliphant, which has been performing Muldoon’s song lyrics and spoken word pieces for years, and released its first CD, I Gave The Pope A Rhino, last year.

Can Muldoon tell us a little bit about them – introduce the band, as it were? “Rogue Oliphant has many manifestations,” he begins. Then he stops and laughs. “It sounds like a theological phenomenon, doesn’t it? Loads of people are connected to this band, insofar as it’s a band at all. Which it probably isn’t. It’s not a small unit that people are trying to keep together. It’s a moveable feast.

“But the core band is coming over for the show. A power trio, as they say. That’s Cait O’Riordan, whom you all know, and these two other fabulous musicians with whom I’ve worked for many years.”

Songs and poems are, for Muldoon, closely related but quite distinct. At Princeton University, where he is Howard GB Clark ’21 Professor, he teaches a course in advanced poetry – and another in songwriting.

“It’s a delight,” he says. “Sometimes I teach it by myself and sometimes with a musician. Each week the students write a song to a particular emotional theme, be it desire, loss, regret, whatever it might be. These students are astrophysicists and civil engineers – very few are music majors or writing specialists – but they’re multi-talented. The quality of what they do is extraordinary.

“Of course, one has to believe that all these things are teachable. In the Irish tradition it was certainly thought to be the case, with the Bardic school and all the rest of it. I myself have been trying to write poems for quite a long time now. The fact of the matter is that most of the time I realise how little I know about it. Each time one sits down to write a poem or a song, one has to learn to write that poem or that song – and really, only a little bit of what one might ‘know’ comes along on the ride.”

Songs, arguably, come most fully to life in live performance. That’s a lesson Muldoon learned as a boy growing up in Co Armagh. “I remember as a kid – in one’s own house or certainly the parish hall – people would stand up. They would recite a poem, maybe something like I’m Living in Drumlister. They would put on a little sketch.”

Muldoon’s Picnic is, he says, a direct descendant of that impulse to perform, to share, to make one’s own amusement. “It’s one of our most basic instincts; to listen to a song, listen to a poem. Even in this era when people have their noses stuck in their tablets, it still works.”