How Barack Obama became top of the Twitter charts

Obama tweets less than Trump, but seven of the 10 all-time most popular tweets are his 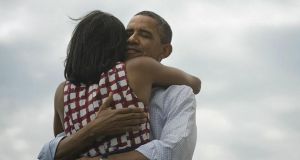 When Jack Dorsey was looking for a name for his new social media site in 2006 he was going to call it “Twitch” but when looking up the word in the dictionary his attention moved to the word “twitter”.

“The definition of twitter was ‘a short burst of inconsequential information’ and that’s exactly what the product was,” Dorsey has explained about the beginnings of Twitter.

Three years after it was founded, a US market research term analysed millions of tweets over a two-week period and found they broke down as follows: pointless babble (40%); conversational (38%); pass-along value (8%); self-promotion (6%); spam (4%) and news (4%).

But given the political turbulence of recent years, the site is now used by many for breaking political news. On the night of the 2016 US presidential election, Twitter was the largest source of news, with 40 million election-related tweets being posted in the space of a few hours.

This week, given the international furore over the Charlottesville white nationalist rally last weekend, Twitter users reflected people’s concerns by making a tweet by Barack Obama the most-liked tweet of all time on the site.

Posted the day after the Charlottesville rally, Obama’s tweet was a quote from Nelson Mandela’s 1994 autobiography, Long Walk to Freedom, and read, “No one is born hating another person because of the color of his skin or his background or his religion.” It was accompanied by a picture of Obama greeting a diverse group of children at a daycare centre.

The tweet has now been liked almost four million times.

The previous record for the most-liked tweet was held by the singer Ariana Grande, whose tweet following the bomb attack at her concert in Manchester last May that she was “broken from the bottom of my heart, I am so sorry, I don’t have words” was liked by 2.4 million people.

broken.
from the bottom of my heart, i am so so sorry. i don't have words.

"No one is born hating another person because of the color of his skin or his background or his religion..." pic.twitter.com/InZ58zkoAm

Although Obama was nowhere near as frequent a tweeter as the current US president, Donald Trump, seven out of the top 10 most-liked tweets of all time belong to him. Of the other three tweets in the top 10, one is by Hillary Clinton, one by chat show host Ellen DeGeneres (her group selfie tweet from the 2014 Academy Awards ceremony) and one by the rock band Linkin Park mourning the death of their singer, Chester Bennington.

Perhaps in recognition of Twitter’s growing user-base, eight of the top 10 most liked tweets of all time come from 2017.

There are two indicators on Twitter that reflect the popularity of a tweet. Liking a tweet by pressing the heart symbol under that tweet is one; the other is to retweet it so it appears on your own timeline.

Obama again dominated the most retweeted top tens with three entries; however, there is a very different dynamic at play between the most retweeted and the most liked. While Obama is top of the liked tweets, nothing tweeted by him can get past One Direction member Louis Tomlinson, who has over 2.5 million retweets of his “Always in my heart @harry_styles. Your sincerely, Louis” post to his bandmate.

Tomlinson’s is the third most-retweeted post of all time on the site, behind Ellen DeGeneres’s Oscars selfie at number two.

The most retweeted tweet in history, though, is not some inspiring political quote or profound philosophical insight. It belongs to a 16-year-old schoolboy from Reno, Nevada looking for a free portion of chicken nuggets from a fast-food chain.

On April 6th this year, Carter Wilkerson tweeted the Wendy’s fast-food chain asking how many retweets he would need before they would give him a free portion of chicken nuggets. Wendy’s tweeted back “18 million”.

The enterprising Wilkerson then asked Twitter users to retweet his original tweet so he could get to the 18 million mark and claim his free prize.

After less than a month, and with 3.65 million tweets already in the bag, Wendy’s capitulated very graciously. Not only would the company provide Wilkerson with free chicken nuggets for a year but they would also donate $100,000 in his name to an Adoption charity.

“You’ve more than earned our respect – and the free nuggets,” said Wendy’s head of marketing.

Due to having the most-retweeted tweet of all time, Wilkerson became an unlikely celebrity. After an appearance on the Ellen DeGeneres chat show to celebrate his achievement, he found himself being recognised as the “the nuggets kid” wherever he went.

As is the way with online behaviour now, Wilkerson also found himself the target of nasty abuse, and there were claims that he and Wendy’s colluded on the whole affair as a marketing stunt. The media actually studied his Twitter timeline and found that he was indeed a genuine fan of Wendy’s chicken nuggets and had tweeted about them before.

Given his 15 months of internet fame, Wilkerson decided to use it as – he explains himself – “a force for good”. He used his new Twitter fame to encourage his followers to donate money to a local organisation that supports women with breast cancer. He also began selling #NuggsforCarter T-shirts – with all money raised going to an adoption charity.

Going by this week’s figures, though, he only has a few more days before being replaced at the top of the most-retweeted charts by Barack Obama. And as Obama was simply quoting from a great leader, it is really Nelson Mandela who will soon hold the record of both the most-liked and the most-retweeted tweet of all time. A fitting end to the week that was in it.

Most liked tweets of all time

Most retweeted tweets of all time