From land to sea, William Crozier in West Cork, and artists getting aquatic at the Glucksman Gallery 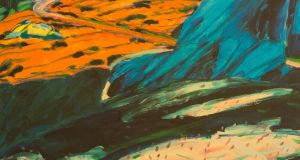 William Crozier’s work from ‘The Edge of the Landscape

William Crozier: The Edge of the Landscape

When Tony O’Malley painted landscapes he made clear distinctions in colour: the fields of Ireland are dark-hued, the canvases rich with the idea of wet sods, grey walls and skies. Those he painted in the Bahamas, where he would decamp for his health, dance and sing with colour. You can feel his painterly eyes dazzled by the scenes around him.

His near-contemporary, William Crozier, took a different approach. For Crozier, the landscape around West Cork, where eventually he bought a home in 1983, was as dazzling as O’Malley’s tropics. Hot yellows, deep indigos, glowing greens and bright crimsons make up his gardens, seas, fields and trees. And yet there’s a darkness to them, lending a brooding sensibility to his scenes. Black lines and shapes make you think that this is a landscape that is not always kind.

At the Crooked Bridge II (1989) is a case in point. Crozier, who died in 2011, wrote beautifully on his own work, and in the accompanying text, he describes how he “had been reading of an incident that occurred there exactly a hundred years before”.

A landlord had been attacked and killed by a group of local men, waiting in ambush. “The murder is now largely forgotten, but as I stood on the bridge, it was easy to imagine the tumult, the drama and the violence that had taken place.” The painting is an energetic canvas of swathes of orange, bright blue and green, criss-crossed with darker lines, cutting into the land.

“The landscape seemed to set the emotional key for the crime,” Crozier wrote. It’s a similar idea to that of poet Thomas Kinsella, in his poem, His Father’s Hands: “I do not like this place. / I do not think the people who lived here / were ever happy. It feels evil / Terrible things have happened . . .”. Like Kinsella, Crozier was incredibly sensitive to place, and also to humanity’s propensity for violence.

One of the earliest works in this exhibition is a self-portrait from 1961, when the artist was 30 . It shows a screaming, skull-like head, coming out of blackness, against a violently flaming orange-red background. “Clearly,” the accompanying text helpfully tells us, “it is not intended to be a realistic representation.” Obviously not, but it does – as effectively as Edvard Munch’s 1893 The Scream – convey emotion almost too intense to bear.

It’s also a tantalising glimpse into the artist Crozier had been, during his early years in Paris and London, where he knew, but didn’t particularly hang out with, Lucien Freud and Francis Bacon. Marked by the second World War (he was 15 when it ended), his work was populated with skeletons, shockingly malevolent crouching figures, wracked with implied violence. Tantalisingly, these works are not in this exhibition. They’re waiting for part two, which will be at the Irish Museum of Modern Art from October 12th to April 8th, 2018.

It’s an odd dislocation, although Uillin’s compromised gallery spaces (Oh that the architect could have given less thought to the atrium and windows, and more to where the art would actually be shown) couldn’t physically fit any more work in.

The paintings that are at Uillinn are, for the most part, glorious – only The Cut Grass (1992) seems oddly flat – but to be able to make fuller and more immediate comparisons with where this later style had come from would have been doubly rewarding, and perhaps enabled us to see what peace this profound and exceptional artist may have found from his earlier torments, in his art.

The Glucksman continues its thematic journey of ideas through art (we’ve had health, food, the future, animals and so on) with an exploration of the sea. It’s a deeply fascinating topic. Ideas of drowned worlds continue to seduce: from JG Ballard’s haunting novel of 1962 to the various myths of Atlantis, to submerged villages here in Ireland. So too do legends of the sea, from the stories sailors tell, to selkies and mermaids.

At the Glucksman, we’re met with a jaunty installation by UK artist Lucy Skaer. There are three sails, and various metal blocks. Skaer has apparently based the work on Plato’s Ship of Fools allegory, in which sailors can’t agree on a leader, and so drift aimlessly. The piece itself morphs from venue to venue. I looked it up to discover that the pattern on the sails has come from the floor of the gallery in Germany where first it was displayed but, while it’s pleasant to look at, I’m not left feeling dangerously adrift.

I drift more with Tacita Dean’s series of photographs of Berwick Lighthouse. They’re from a larger project, including a film, based on Donald Crowhurst, who disappeared during a round the world yacht race in 1969. The exhibition text tells of Crowhurst’s “navigational loss of bearings and sense of time”, which “led him to throw himself overboard”. This may be true, but it’s not evident in, or available from the work on show.

Similarly, Andreas Kindler von Knobloch’s photographs from his sailing expeditions on Dublin Bay communicate little beyond the fact that he went out on a boat, and that it seems very pleasant.

Janaina Tschäpe’s paintings are far more satisfying: deep blue-hued, and multi-layered with the idea of shimmering lights behind – you just want to dive in. The siren call of song lures you upstairs. It’s coming from a film by Tschäpe, in which a man learns, to his cost, that it’s not ideal to fall in love with a mermaid. Made in 2000, it’s unclear whether the graininess is deliberately arty or due to technological limitations, but it’s frustratingly hard to watch.

Alongside this, you have to take Sean Lynch’s word for it that these are indeed sunken moulds from the De Lorean plant, covered with limpets and barnacles in his photographs. But there’s another pair of highlights up here: Conrad Shawcross’s trip down the source of the river Thames is played on a 360 degree rotating screen, set up to orbit the boat he embarked on. On the wall beside are a range of balls, lined up like the planets in the solar system, that he pulled out of the water en route.

This other-worldly idea is also played out in Maria McKinney’s towering sculptures, Abyssals. These are weird and wonderful, and every bit as seductively strange as you’d hope for from an underwater extravaganza – although in fact they’re made from “fruit and vegetable netting, lungfuls of air, false nails, expanding foam, steel rods, pipes and cement”. That’s a lot of materials – and it all works brilliantly.

I wish the exhibition could have been similarly brave and exuberant, added more, done more than get its feet wet. I wish it could have taken the plunge, to really get to grips with what lies beneath and why it fascinates so much.

The Chicks: ‘We were accepted because we made them a lot of money, but they didn’t like us’
3

Brian Moore: ‘There are those who must flee Ireland to see Ireland plain’
6

Anne Enright: ‘Nuala O’Faolain was an impossible person, to whom we owe so much’
7

Paschal Donohoe on The Economics of Belonging: Crisp analysis of discontent
9