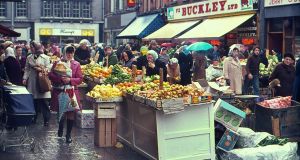 Last year, 76-year-old retiree Michael Foley uploaded a number of beautiful old photos of Moore Street fruit and veg traders and their customers to Facebook - pictures filled with headscarves, hair curlers, Brylcreemed hair, wooden carts and horses. They quickly became a phenomenon, liked and shared thousands of times across social media. In the many comments you can read there, as well as people basking in shared memories of old Dublin, there are commenters recognising people they used to know – friends and family members and neighbours long gone. “Within two weeks I knew the name of every single person in those photographs,” says Foley.

The photos were taken in 1974. A couple of years before he had started a job in the education department of UCD as a producer and lecturer in audio-visual media. He had also recently married and moved to Ranelagh where he still lives. It was, he says, “an eventful time in his life.”

In his department they would help students and staff create presentations and slide shows and one day that year, two students came to him for help with an assignment they were working on about the development of Moore Street and urban renewal. “The Ilac Centre was being planned and there were fears it was the end of Moore Street. So they wanted to make a tape-slideshow to go with their project, these two carousels pictures merging with sound.”

Foley was a bit of an audio-visual pioneer. He went on to help facilitate the first courses delivered via satellite broadcasting from UCD to the University of Jordan in Amman in 1987. “We had President Hillery opening it and King Hussein on the other side.” In 1997 he was hired by the World Bank in Washington to help them establish similar video conferencing programmes so they could help train officials in other countries. Photography has always been part of his life. He had photos of UCD Drama Society productions published in the Irish Times in the 1970s, uncredited, because he wasn’t a member of the NUJ. “I was a union man – in IFUT, so I understood. I was glad that my pics were in print.”

When he worked for the World Bank, pictures he took of ordinary people in Afghanistan and Pakistan were used in exhibitions and a hundred of them are held in the US Library of Congress. His boss wanted to use some of his photos at a management retreat to remind the directors “who they work for.”

When did he discover photography? “I know the day I got into it. I was in Clonliffe College, going to be a priest. Kenneth Whitaker’s son Gerry was in my class and he took a photograph of me and he took me to watch it being developed. We had a dark room there – JC McQuaid helped us build a darkroom. And it was like the movies. You know when you have the print and the dish and you see this image appear? I just thought it was magic.”

Where have these pictures been for the last few decades? “I had them in carousels on my shelf in my home office,” he says. “I even brought them to America and back again. But last year the traders wrote to Dublin City Council saying ‘We’re going to have to stop’ [because traders feel neglected and victim to anti-social behaviour]. And I was sitting at home. ‘Hang on,’ I said. ‘I have those photographs.’ So I went and scanned them and put them up on Facebook.”

We look through the photos together.

His favourites include one featuring a young girl named Theresa Connolly (who had no memory of the photo being taken), a picture of a child in the winter light as a horse drawn cart goes by and one of a trader named Ginny Beggs calling out. “It looks like she’s roaring out ‘Get your Jaffa oranges!” says Michael. Some of the people are still around. He met up with Theresa Connolly and a trader called Marion O’Brien who was very young in the photos and still has a stall in Dublin city centre.

He has always felt the power of old photography, he says. “When I take photos of family I always say, ‘Guys, I know you hate this. But do you like old photographs?’ They say ‘Yeah.’ I say, ‘Well, the only way to get old photographs is to take new photographs.’ I’m very conscious of the history of photographs and how they contain a moment in time.”

The original function of his Moore Street photographs doesn’t matter anymore. Foley no longer has the academic report or the taped interviews that accompanied it, but he always knew that the photographs were important in their own right. “That’s why I never threw them out. I thought ‘These are some old photographs in waiting.’ It’s like old wine. You put it on a shelf and it increases in value all the time… And when I put them out there, boy, the resonance of it for people.”

Brenda Cowlard doesn’t specifically remember the day that Michael Foley photographed her eating from a bag of sweets as her mother and father bought fruit from Marion O’Brien’s fruit stall. But she was eleven then and they came into town every Saturday morning from Glasnevin to shop on Moore Street and then get coffee and cake at Graham O’Sullivan’s café on Marlborough Street.

In the photo, her parents, Paddy and Eveleen Quinlan, look like a remarkably stylish couple. Her father, who worked as a driver for Guinness and later as a chauffeur for the Guinness family, has Brylcreem in his hair and is wearing a tie beneath his trench coat. He looks like he is about to speak. “He loved to banter with the women on the stalls,” she says. Her mother, who worked for the National League of the Blind and later as a secretary to a surgeon, is smiling. She has perfectly set hair beneath her headscarf and is wearing a fur coat. She’s amazed by how many people recognised them in the comments alongside the photo.

“It was very strange, because my dad died in 2000 and it was just lovely to see him,” says Brenda. “And then my mam always looked after herself as you can see in the picture. She was the most stylish woman I’ve ever known… Mam was from Marlborough street. Dad was from Prussia Street, so they were true blues.”

Her mother died in January of this year at the age of 94, but Brenda showed her the photo when it turned up on Facebook back in October (Brenda’s son-in-law told her about it). She loved it. “She said, ‘My fur coat’ and she was delighted with her hair… She used to get her hair set every weekend… When we were growing up, if you saw your friend with a nice jacket or skirt or even saw something in a shop, she’d take out the measuring tape. She’d ask could she measure it in the shop.” She laughs. “I was mortified. But she made all our clothes, my wedding dress…. There were lots of comments [with the picture]. Some said, ‘fur coat and no knickers’ which she thought was very funny actually.” She laughs. “She was delighted people thought she was a snob. Mam was great. She always tried to make the best of everything.”