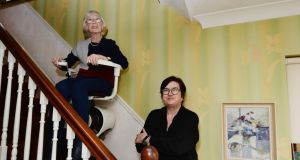 Is this the fastest publication turnaround ever? On November 2nd Helen O’Rahilly – a former BBC executive just moved home to Dublin after 30 years in London, self-confessed “prolific tweeter”, and niece of The Aunt – tweeted about self-publishing a book of her tweets.

Under the hashtag #StairliftAscends, O’Rahilly had been tweeting since early lockdown, pithy nuggets of exchanges with her 90-year-old aunt, with whom she was cocooning. They became quite the thing – funny, absurd, with a depth of relationship behind their brevity – touched a nerve, and built up a large following.

Aunt: *calling loudly from sitting room* Helen, can you help me?
Me: *drops everything, rushes to front room, expecting her to have fallen*
Aunt: The cat’s on my lap, could you pour me a small Jameson?

No sooner had she tweeted about self-publishing than O’Brien Press MD Ivan O’Brien, who follows O’Rahilly on Twitter, got in touch. Presumably sensing a perfect stocking-filler – gently amusing but reflecting the year that’s in it, if they could move like the clappers – it became a publishing Roadrunner: November 6th, contracts signed; O’Rahilly tweets that pre-orders open November 9th at 6.30pm.

O’Rahilly spends a day collating months of tweets, writes brief framing scene-setters; double-quick design, then off to printer at 5.30pm on November 10th – a week to the minute after O’Rahilly and O’Brien’s first contact.

Now in her own house – the sale closed during lockdown while she was cocooning with The Aunt in north Co Dublin, where she now visits daily – O’Rahilly marvels at the speed of it all. The embroidered stairlift which Niamh Geraghty sent, in appreciation of the saga, sits on a bookshelf – and graces the cover of the slim pocket-sized book (with Jennie O’Connell’s illustrations inside). It’s dedicated to “those who care; those who are cared for and those who have endured so much during this pandemic”.

At 90 the Aunt has reached the blessed spot of No Filter. “She’s very staccato. You don’t get a big raiméis with her. It’s very direct. You get these really pithy comments.”

The exchanges are verbatim, “nothing added, nothing taken”, says O’Rahilly, who noted them as she made doubletakes – “did she really just say that?”

Aunt browses the fashion rails. I go to the lingerie department.
Aunt: What did you get?
Me: A few pairs of Sloggi knickers.
Aunt: Oh. I’m surprised they do them in your size.
Me: ...

The love and respect shines out of O’Rahilly when she talks about The Aunt, even as she marvels at her comments with the little edge.

As a younger woman she was glamorous, independent, loved travel – “she was a jetsetter”. She’s stylish, an adventurous cook, a knowledgeable gardener. More than an aunt, she’s “like a second mother, or an older sister”. For years of O’Rahilly’s childhood The Aunt lived in an annex of the family home in Glasnevin; she recalls girlie nights watching Dallas and eating Sachertorte. The Aunt became the family’s rock in difficult times.

As adults they travelled and had adventures. O’Rahilly shows me a photo of two elegant older women, tilted slightly towards each other, her mother and aunt. “I called them the chipmunks.” The sisters lived together for decades before O’Rahilly’s mother died last year.

While they were both mourning, O’Rahilly, post-breakup and recovering from an accident, moved home to Dublin; two lives upended in different ways. Then Covid hit. They found themselves unexpectedly thrown together in cocoon as life grew smaller, the carer and “this feisty, funny woman”.

Through it all she posted snippets of their daily interactions, banter, misunderstandings. “Some were comic, some poignant, some frustrating. Many of her finest words came as her faithful stairlift took her upstairs to bed at night: she’d send me off with her instructions for the next day or there’d be a withering comment about the day’s events, or rather non-events.”

The Aunt yearns to get out.
Aunt: We’re going to Arnotts tomorrow?
Me: No way! It will be jammed.
Aunt: Well, bring me to get my hair done then.
Me: Hairdressers don’t open until the end of June.
Aunt: WHAT? *under her breath* This is the worst year of my life.
*She is 90*

“She’s not a touchy-feely person,” and O’Rahilly savours the intimacy, doing her hair (“and next time don’t drown me”), bringing her shopping, creating her garden under The Aunt’s direction.

The tweets found recognition among her growing Twitter following who see echoes of their own families, and carers especially find solace and humour. Some, lying awake at night at the end of their tether with love and exhaustion, message O’Rahilly, and she tries to be of practical use. (She set up localsupport.ie in early lockdown, matching volunteers with those needing help.)

The stairlift annals follow Ma and Me, longer conversations with her mother that she posted for friends on Facebook years ago. Looking back, “it’s lovely to read them, not in a morbid way. So it was in my head how precious those little moments are, even the narky conversations.”

Plus, “caring for her really focussed me on somebody else. It gave me the will to get up in the morning.” After a disastrous 2019, then Covid, “a year later, I really am happy. Life is re-forming. Apart from lockdown it’s been a soulful journey.”

The book is about “trying to survive Covid, without diminishing anyone else’s suffering. It’s a snap of two women of different generations trying to keep each other alive. It’s given her a laugh. It’s given me a laugh. And we’re still going.”

The Aunt was fully onboard from the start (“I’m 90. What do I care?” when asked could she tweet the grumbles, gripes and giggles). She understands people relate to it, even if she’s a tad mystified about why it’s funny. “She can’t quite believe it’s taken off.” Her only request was anonymity and that O’Rahilly put up no photos.

A couple of days after we chat, on the morning the photographer is taking pictures of O’Rahilly and the stairlift, she texts me. They have now seen the actual book, and “The Aunt wants to be photographed. She loves the book! Her reticence has vanished. She didn’t want me to have all the limelight!”

Furthermore, as she descends in the stairlift afterwards, The Aunt gives her permission: we can call her Monica. She shall be nameless no more.

The Stairlift Ascends – Tweets from a Covid Cocoon, by Helen O’Rahilly (The O’Brien Press, €7)