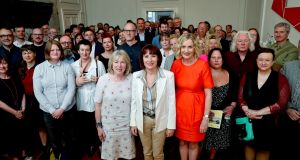 Minister for Arts Josepha Madigan reaffirmed a commitment to the “arm’s length” funding of arts, when she visited the Arts Council on Monday as it announced arts funding for creative projects, artists and arts organisations .

This was the first visit by the Minister to the council’s headquarters in Dublin, and about 90 people from a wide cross section of cultural organisations greeted her. She said the role of the State is to support art, and acknowledged the arts have had “extremely hard times”, with “a difficult few years of funding and resource cuts”.

“Now our job is to sustain momentum and investment,” she said. The Government is committed to “ increasing investment in arts and culture and in expanding our global footprint”, which requires a vibrant arts sector. She acknowledged the “complex, interlayered, connected series of relationships between arts education, arts organisations, individual artists and us the audience. I know too the essential, central role of the Arts Council in sustaining, encouraging and supporting the arts. I know and I fundamentally respect the essential arm’s length principle in arts funding.”

This statement comes in the wake of speculation about whether that principle of impartial arts funding might be weakening following the setting up of the Creative Ireland entity.

The Minister’s visit to the council came just four days short of six months after her appointment. She acknowledged the important role the council has played at the centre of arts policy, and for artists, arts organisations and people across the country. She praised Making Great Art Work, the council’s “well thought-through” 10-year strategy, marrying the Arts Council’s knowledge and expertise with its duty to develop the arts for future generations.

Arts Council chairwoman Sheila Pratschke also stressed the role of arts funding in fostering artists of the future. “In 2025,” she said, “Irish art and culture will include works we have not yet seen, by artists of whom we have not yet heard. In many cases, it will be work by artists who do not yet know that’s what they are.”

Ms Pratschke said “we must find that ambition burning in the artists of this generation and nurture it”, and said the role of the Arts Council was supporting art so it can bloom and flourish.

She welcomed the government’s plan to invest €1.2 billion of capital and double current spending on the arts and culture as part of Project 2020.

In a strong statement about the importance of culture, and of support, investment and nurturing of the arts, Ms Pratschke said: “We must continue to find and support festivals, companies and artists in towns and villages around this country. Some think that like Topsy, these artists, organisations and events just grow. They don’t. And they are the bedrock of our culture.”

Jo Mangan of National Campaign for the Arts (NCFA) said it was “heartening to hear Minister Josepha Madigan reiterating this Government’s commitment to investment in the Arts, alongside acknowledging the arms length principle under which the Arts Council operates. “

The Arts Council used the Minister’s visit to announce its latest funding decisions, with more than 100 artists, arts organisations and projects across Ireland receiving almost €7 million in investment as part of its Arts Grant Funding scheme.