Louth and clear: a maverick’s musical adventures in Dundalk 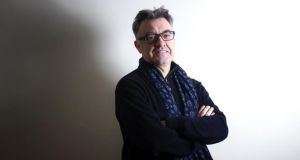 Eamonn Quinn: What’s interesting about his curiosity in the world of new music is his lack of ideology. He does not appear to be interested in any style or trend for its own sake

The beneficiary was the society’s founder, Eamonn Quinn, who was described in the Forberg-Schneider-Stiftung’s press release variously as a “self-taught maverick”, “a sophisticated explorer and communicator with a burning passion for contemporary music” and as having “passion, lucidity and the curiosity of an astonished child”.

What’s interesting about his curiosity in the world of new music is his lack of ideology. He does not appear to be interested in any style or trend for its own sake. He has, for instance, featured Crash Ensemble with its rock-like commitment to amplification, and he has also presented music that hovers on the cusp of audibility in ways that can make you wonder if you’re genuinely hearing an instrument or voice or just imagining the sounds that you’re concentrating on.

The society offers an adventure for the musical palette. Attendance involves an act of faith in Quinn’s programming choices, which mostly consist of pieces that have not been heard in Ireland before and often of works that are being performed for the first time.

You could think of one of the society’s event as being like the Wednesday dinners at The Fumbally, where you don’t know exactly what’s on offer until you arrive, or a chef’s tasting menu where you place yourself in someone’s hands no matter how strange or unfamiliar some of the ingredients are. For some listeners, I suspect, the work Quinn presents can be almost as challenging and exotic as the arrival of, say, a piece of durian or a selection of sautéed insects on a restaurant plate.

Musically, he fits all the descriptions of the Forberg-Schneider-Stiftung. But he is also a leader, a man following his own taste and inviting others to share it with him.

He is a leader through conviction, but only in the sense that he seems compelled to give in to his own inquiring mind. He never professes to know exactly how anything will turn out or to have the same enthusiasm after every performance that he had when he planned it.

He is his own severest critic, which is probably why he has had such success as a record producer of the string of CDs that LCMS has released. The recording studio can embrace and reward perfectionism in ways that are often problematic in live concert situations.

The upshot in the real world is as about clear as the consequences of Britain’s Brexit vote. And, like the rights and wrongs of that vote and the still ongoing Brexit process, all possible outcomes are pretty well compromised, given the rigidity of the basic premise.

Belgium’s Trio Goeyvaerts (a string trio named after Karel Goeyvaerts, 1923-93, a composer who might one day spark Quinn’s curiosity) played the painstakingly spaced-out, vibrato-less sonorities of the Schweinitz with a studious, ascetic zeal, every new combination of sounds laid out like a morsel of food to be eaten ever so slowly and appreciated for its unique essence. As a musical experience it was fascinating but not quite convincing.

The best-known piece of the weekend was Gavin Bryars’s Jesus’ Blood Never Failed Me Yet, a looped field recording of the frail voice of a homeless man with an overlay of affecting harmony, which ever so slowly builds and fades, and into which the composer, himself playing double bass in an ensemble of festival musicians, knitted parts for local children who are part of Music Generation Louth. The touching combination of frailty and faith in the singing and earworm harmony is unfailingly effective.

The weekend’s range extended across the balsa-wood lightness of Michael Pisaro, in which notes just seem to touch off each other, the wider-ranging sonic investigations of Berlin-based British composer Rebecca Saunders, the altogether gentler sweetness of Karen Tanaka, the violent storms and eerie whistles of flute pieces by Salvatore Sciarrino (played by Matteo Cesari), and a selection of work by Gérard Pesson, which included La Lumière n’a Pas de Bras pour Nous Parter, a white-note-only piano piece (played by Pascale Berthelot) in which the sounding notes sound almost like accidents of the patterns being rattled out on the surfaces of the keys. Linda Buckley’s works, Revelavit and On the Path, linger in the memory, too from the opening concert by Gothic Voices.