The reel Dublin: Best movies about the capital city

Donald Clarke on the best portrayals of the city on film, from ‘The Informer’ to ‘Sing Street’ 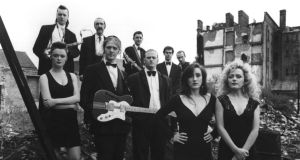 Over the past 20 years, since the Irish film industry shook itself properly awake, somebody or other has been talking about showing us a Dublin you never see on film.

In the late 1990s and early 2000s, ardent young film-makers – I may have said this myself at the time – were desperate to move away from confession booths and grey meetings at family funerals. We got a bunch of zippy films featuring young people drinking Celtic Tiger lager in well-lit bars (a director once bragged to me that none of his pals drank Guinness).

Somebody wondered why we didn’t see the socially excluded in cinemas. So we got some of that. But where were the better off Dubliners on film? Dublin 6 and Dublin 4 got a cosy go.

In Quackser Fortune Has A Cousin In The Bronx (1970), a notoriously offbeat drama starring Gene Wilder as a dung-shoveller, the characters stop off in the Gravediggers of Glasnevin

Yeah, but we need to acknowledge how the greedy have sucked character from the city. Cue some savage critiques of the Robber Baron community.

In the current decade, we’ve had drug wars on the north side and social realism in Tallaght. We’ve seen squashed bourgeoisie getting by in nostalgic versions of the 1980s. It’s all here. Isn’t it? Good luck finding this much-fabled Dublin you’ve never seen.

Dave Tynan’s imminent Dublin Oldschool, an adaptation of Emmet Kirwan’s hit play, can just about make that claim. Going among drug-takers in scruffy corners of the city, the film bears some comparison to Lenny Abrahamson’s Adam & Paul (2004), but it is less sat-upon and more open to epiphany than that bleak comedy.

It certainly does a better job of capturing Dublin on ketamine than The Dead (James Joyce by the quays) or Tara Road (Maeve Binchy in quaint suburbs). Yet it still goes to many of the familiar places. The pub for starters. The heads in Dublin Oldschool enjoy pints in Grogan’s: a democratic Dublin 2 establishment that has long entertained bohemians, hipsters, tourists, old geezers and (does this still happen?) Levellers fans with dogs on strings.

In the grim old days, when a mere handful of films set in the capital emerged each decade, you could always count on such a scene. In Sergio Leone’s delightfully ripe A Fistful of Dynamite (1971), you can see James Coburn enjoying a tense drink in Toner’s of Baggot Street. In Quackser Fortune Has A Cousin In The Bronx (1970), a notoriously offbeat drama starring Gene Wilder as a dung-shoveller, the characters stop off in the Gravediggers of Glasnevin. That last film contains some sobering shots of a dog-eared city, but you don’t really get any reliable sense of the city’s mood.

This was the case with most of the Dublin films that popped up during cinema’s first century. John Ford’s The Informer (1935) remains an undimmed classic, but, filmed on the soundstage, it doesn’t much connect with the real city.

Oddly, you get quite a bit of street life in Joseph Strick’s worthwhile take on Ulysses (1967). Strick, for budgetary reasons, set his film in what was then the present and the city plays itself with some charm. More useful still is Desmond Davis’s decent version of Edna O’Brien’s Girl With Green Eyes from 1964. Attempting to do for Dublin what they did for Salford in A Taste of Honey, Woodfall Films sent Rita Tushingham around an austerely pretty version of those streets.

These exceptions noted, the version of Dublin that we are most lacking – and by definition can never recover – is a contemporaneous take from independence to the 1990s. Cathal Black’s bleak Pigs (1984) and Frank Deasy and Joe Lee grim thriller The Courier (1988) offer rare, domestically produced exceptions.

You could do stupider things than date the shift in gear to The Commitments in 1991. Set in crumbling bits of north Dublin, Alan Parker’s euphoric adaptation of the 1987 Roddy Doyle novel arrived just as the city was clearing its throat for the Celtic Tiger.

John Carney’s Sing Street (2016) ended up as an accidental complementary companion piece. The earlier film went among northsiders who loved only “real music”. Set at much the same time as Doyle’s book, Sing Street concerned southside musicians who were perfectly okay with Duran Duran and teased hair. Mash them together to get some notion of the era’s discontents.

In the years following the restoration of the Irish Film Board in 1993, the race to show us “the Dublin you never see” was well and truly on. (Yes, I know a few of the following films were made without the support of that body.) John Boorman’s excellent The General (1998) – the point at which Brendan Gleeson really went large – addressed the mythology surrounding hoodlum Martin Cahill and, thanks to flinty cinematography from Seamus Deasy, painted an awkwardly attractive picture of Dublin’s inner city.

Gerard Stembridge’s pretty About Adam (2000), featuring a then largely unknown Kate Hudson, proved that there was juice in the more leafy suburbs of south Dublin. Liz Gill’s frisky Goldfish Memory (2003) acknowledged that there were such things as gay people and that they drank coffee in public places.

Hang on though. We need a counterblast. Boorman’s The Tiger’s Tale (2006) is not without its rampaging flaws – Kim Cattrall’s accent was less convincing than Hudson’s in About Adam – but the absurdly heightened portrayal of Tiger-era Dublin as a Hieronymus Bosch Hades certainly stuck in the brain.

Terry McMahon’s Charlie Casanova (2011), portrait of a psychopathic urban capitalist, was, if anything, even choleric and ill disciplined, but McMahon rallied for the more considered Patrick’s Day (2014). That film’s opening depiction of the Saint Patrick’s Day festivities in the city confirms its sure sense of place.

Somewhere between the furious railing and the more-comfortable comedy, we had the light and shade of John Crowley’s Intermission (2003). Based on a brilliantly busy script by Mark O’Rowe, the film is remembered for the variety of its tone and for that famous shot of two Dublin buses touching noses at the end of their journeys.

Adam & Paul does still feel like the key Dublin film of the century. The locations define and dictate the decisions taken by the two titular drug addicts

We could go on. We could go on and on. In recent years, social-realist takes on continuing deprivation have continued with Gerard Barrett’s Glassland (2014) and, from this year, Frank Berry’s transcendent prison drama Michael Inside.

Adam & Paul does, nonetheless, still feel like the key Dublin film of the century. The locations define and dictate the decisions taken by the two titular drug addicts as they move through comedy to catastrophe.

Maybe, it really did capture a Dublin you hadn’t seen until then. Its long shadow stretches into the future.