Mass civil disobedience and the War of Independence 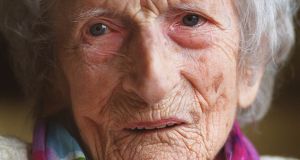 Bridget Dirrane, who died in 2003 aged 109, took part in a Cumann na mBan vigil outside Mountjoy on the November 1920 morning that 18-year-old IRA volunteer Kevin Barry was hanged. “We heard the death bell and then there was silence,” she said. Photograph: Joe St Leger

Through the 19th and into the 20th century, the use of peaceful mass mobilisation, collective action against state institutions, boycott and ostracisation was common in Ireland. From Daniel O’Connell’s monster meetings during the Catholic Emancipation campaigns, through to the Land League movement of the 1880s, civil disobedience had proved itself a powerful weapon of the powerless. These campaigns used tactics of mass meetings, ostracisation, boycott, and rent strikes.

Civil disobedience would continue to be part of feminist, socialist and nationalist activism in the first decades of the 20th century. In 1900, the feminist organisation, Inghinidhe na hÉireann, called for boycotts of British goods in shops, and began a campaign against recruitment of Irish men into the British army. They were not the only groups speaking of boycott and civil disobedience. In 1903, Sinn Féin founder Arthur Griffith promoted the ‘Hungarian Model’, a policy of civil disobedience, passive resistance, and non-cooperation; mobilising the population to boycott the political, economic, policing, legislative and judicial systems of the British state.

From June 1920, all around the country, RIC men, their families, anyone who interacted or worked for them were to be boycotted

After 1916, mass civil disobedience and propaganda became important tools of resistance. Drawing on the successful use of these tactics by previous generations, the Republican movement built a mass movement of resistance to British rule. Fundraising events, national and international propaganda campaigns, political funerals and welcome-home events for released revolutionaries galvanised the population. In particular, the anti-conscription campaigns of 1918 demonstrated the power of mass mobilisation.

The 1918 anti-conscription campaign brought Sinn Féin, the Irish Parliamentary Party, Labour, and the Catholic Church together in a mass movement. On April 24th, a one-day strike brought most of the country, outside of the north-east, to a standstill. This strike effectively killed conscription, A further countrywide campaign by women’s organisations, Cumann na mBan, the Irish Women Workers’ Union and the Irish Women’s Franchise League, resisted further recruitment campaigns with a massive ‘Lá na mBan’ protest day on June 8th. The ability of political and militant Republican organisations to mobilise countrywide served Sinn Féin well in the general election of 1918. The meeting of the first Dáil on January 21st, 1919, and the first shots of the War of Independence at Soloheadbeg on the same day, signalled the beginning of both the militant campaigns and the campaigns of mass civil disobedience. Both were to be vital to the ability of Republicans to destabilise the smooth functioning of the British state

While military actions by the IRA and the crown forces were major characteristics of the Irish War of Independence, civil disobedience proved a very successful aspect of resistance to the British state

One of the successful campaigns was the boycott of the policing arms of the British state, the Royal Irish Constabulary and the Dublin Metropolitan Police. From June 1920, all around the country, RIC men, their families, anyone who interacted or worked for them were to be boycotted. The boycott extended to the British military stationed in barracks. This boycott was imposed both by soft and coercive means. There was widespread compliance and support, but those who resisted were often ‘encouraged’ by threatening letter or late-night visit to fall in line with the boycott. This intimidation extended to women suspected of being friendly with RIC or military, who had their hair sheared in late-night attacks, and to barrack servants, who faced intimidation and ostracisation.

The Dáil also set up a counter-state to appropriate the functions of government, through various ministries, and most successfully, through the Dáil courts. These Dáil Courts were successful in gaining the support and acceptance of the population, who rejected the state judicial system. With the success of the RIC boycott, the Dáil needed to prove its ability to police and protect the population, particularly against petty criminality and agrarian violence. Like the Land League courts of the 1880s, arbitration courts were set up in 1919 to settle land disputes, while by late June 1920, under the auspices of the minister of home affairs, Dáil Courts, which would oversee civil, criminal and industrial cases, superseding the British legal system, were set up.

By the summer of 1920, Dáil Courts, presided over by both men and women, were operating all over the country. They were successful and as well supported as the RIC/DMP and military boycott, bringing about the collapse of the state judicial system. As with many RIC constables, there were resignations by magistrates, jurors did not turn up for duty, and the population generally boycotted the state judicial system. Repression drove the Dáil Courts underground, but they continued to exist until July 1922. They were a major propaganda coup, demonstrating that the Irish state could indeed govern itself.

As repression grew, particularly after the arrival of the Black and Tans, mass prayer gatherings outside prisons when Republican prisoners were held, and political funerals of IRA men killed in action or executed, were commonplace. This politicisation of prayer was a powerful tactic in the propaganda campaign against British repression in Ireland. Often organised by Cumann na mBan, crowds would gather at prisons, military barracks and other public spaces, where they would recite the rosary, often interspersed with political messages. Images and descriptions of kneeling women, of keening mothers of executed men, of women burying the Republican dead flashed around the world.

Funerals were opportunities where mass displays of communal solidarity could be demonstrated. The IRA and Cumann na mBan were extremely successful in propagandising funerals. In 1920, the funeral of Terence MacSwiney, lord major of Cork, who died on hunger strike, was attended by tens of thousands, causing British diplomats to express concern at the growing support for the Irish cause worldwide. Even local funerals of IRA men killed by the crown forces, with religious and Republican rites organised by Cumann na mBan, had the effect of solidifying support for the Republican cause.

While military actions by the IRA and the crown forces were major characteristics of the Irish War of Independence, civil disobedience proved a very successful aspect of resistance to the British state. Mass civil disobedience engaged large segments of the population in ways that militancy and violence could not and played an important role in normalising the governance of Ireland, by the Dáil, in both national and international propaganda.

Mary McAuliffe is a historian and assistant professor of Gender Studies at UCD. Her latest publication is Margaret Skinnider (UCD Press, 2020, Life and Times Series)

If the artist offends, should we pluck out their work?
5